Jones is on road to redemption, wants back everything he lost 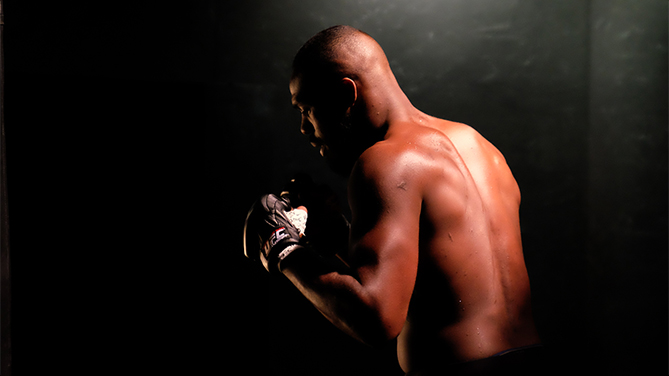 The Jon Jones redemption tour is underway, and it’s the hottest ticket in Las Vegas this weekend.

The pound-for-pound king has said all the right things. The community service hours have been logged; the gratitude to fans for continued support has been paid.

Hell, Jones took a late notice fight to save the UFC 197 main event, something he has vowed never to do in the interest of his legacy.

Legacy, in fact, is the current theme of this tour ahead of Jones’ anticipated return against Ovince Saint Preux for the interim light heavyweight title. And this stage doesn’t end with just a win Saturday night.

Jones has work to do, inside and outside the Octagon, to reclaim his throne and cement his legacy. The former light heavyweight champion has owned up to his mistakes and now feels fortunate to be holding the pen while writing the remaining chapters of the book of his life.

“Right now – I could be at the beginning of the book still,” Jones said. “So the little hiccups, they don’t define me. I just know I have a lot of work to do to make sure the ending [of the book] is something powerful. That it’s something people can look up to and draw strength from in the future.”

For almost everyone in the know, Jones is held in high regard for his accomplishments as a fighter. Most media experts consider him the best pound-for-pound fighter on the planet. Some even think he’s the greatest fighter of all time at just 28 years old and only eight years into his professional career.

“I could never fight again and be put in the Hall of Fame,” Jones said. “I’m not saying that to sound arrogant, but we all know it’s true. If I continue to do the right things outside the Octagon, that’s it. When it comes to actually fighting, I don’t think I have much to prove to anybody.”

It’s hard to argue with Jones about his credentials. After 21 wins to begin his amazing career (his only defeat was a loss by disqualification because of controversial illegal downward elbows against Matt Hamill), Jones got used to winning.

So a year away from the game was torture – watching his nemesis, Daniel Cormier, claim his vacated title and even defend it in his absence.

“I’ve been a champion since I was 23,” Jones said. “The last five years of my life have been fighting the toughest dudes in the world. People called me the champ; that was my nickname. Now I don’t have that and I want it back.”

The Jon Jones that graces the Octagon at the MGM Grand Garden Arena against No. 6-ranked OSP isn’t the same man who relinquished his title less than a year ago.

Sober for six months after a hard-fought battle with marijuana addiction, Jones has re-built his life through power lifting, healthy living and a close relationship with family and friends.

Jones’ head coach Greg Jackson has seen the improvements Jones has made in his personal life and he expects them to pay off in his professional life starting at UFC 197.

“He’s a very intense guy and that translates to every part of his life,” Jackson told Ariel Helwani on a recent episode of The MMA Hour. “But he’s definitely focused and been training harder than I’ve ever seen him. I think that year off has kind of helped him out. He’s really focused; he’s really intentful – if that word even exists. It’s good to see him like that.”

Brandon Gibson, a coach at Jackson/Winklejohn and a longtime friend of Jones, has been by his student’s side through the good times and the bad. He’s watched Jones succeed and falter, but has always remained by his side because of the person he believes Jones to be: kind, thoughtful and hard-working.

The new and improved Jones will be something to behold on fight night, Gibson said.

“I think the common denominator between the healthy living, the strength and conditioning, and all the martial arts he’s been doing is his focus and his desire to be back with a belt around his waist,” Gibson said. “He wants to remind the world that he’s the best pound-for-pound fighter on the planet.”

The fighting part Jones has had mastered for a long time. The battle between the fences is where the former champ feels most at home.

The next step for Jones is conquering life outside the cage. And, like every challenge he’s had in the Octagon, he’s looking forward to it.

“(Someday) They’ll be able to say, ‘Jon Jones went through a lot. That kid struggled with drugs, partying, fame, money, and all these things came at him at such a young age. He was a little bit of a wild boy, but look at him today,’” Jones said. “I just can’t wait for that part of the story to take place.”

Matt Parrino is a digital producer and writer for UFC.com. Find him on Twitter at @MattParrino