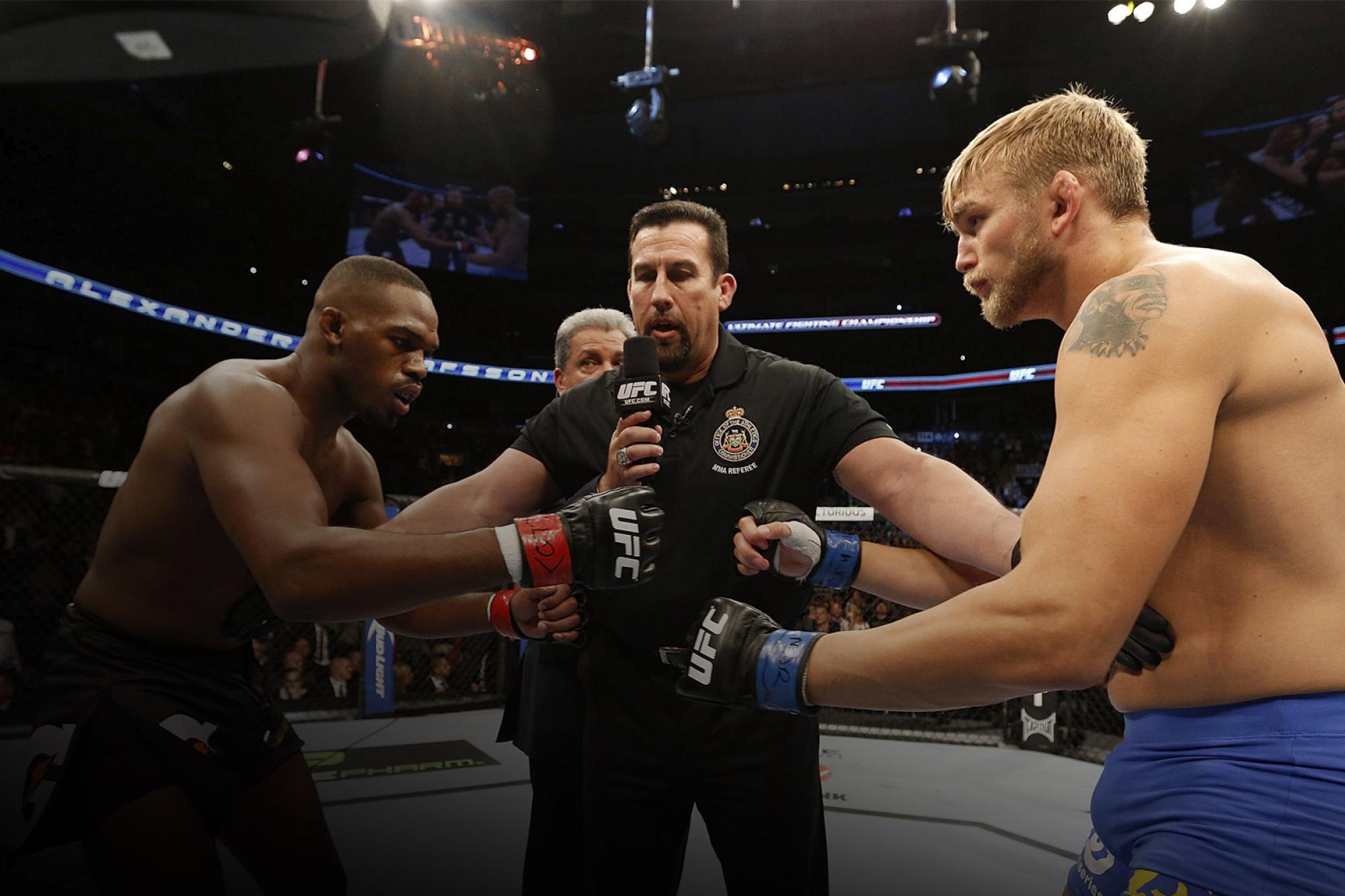 UFC 165 FIGHT BETWEEN JON JONES AND ALEXANDER GUSTAFSSON TO BE INDUCTED INTO UFC HALL OF FAME
Mar. 8, 2020

Las Vegas – UFC® today announced that the classic 2013 fight between UFC light heavyweight champion Jon Jones and Alexander Gustafsson will be inducted into the UFC Hall of Fame’s ‘Fight Wing’ as part of the Class of 2020. The 2020 UFC Hall of Fame Induction Ceremony, presented by Toyo Tires®, will take place on Thursday, July 9, at The Pearl at Palms Casino Resort in Las Vegas. The event will be streamed live on UFC FIGHT PASS®.

“Going into the first Jones vs. Gustafsson fight, fans and media didn’t care about the fight, because they didn’t believe Gustafsson deserved a title shot, and this thing ended up being the greatest light heavyweight title fight in UFC history,” UFC President Dana White said. “To be there and watch it live was amazing. It was an incredible fight and both athletes gave everything they had for all five rounds. This fight was such a classic it was named the 2013 Fight of the Year and will always be considered one of the greatest fights in combat sports history. This fight showed what a true champion Jon Jones was, as this was the first time he was taken into deep waters and truly tested. This fight also put Gustafsson on the map and showed his true potential. Congratulations to Jon Jones and Alexander Gustafsson on being inducted into the UFC Hall of Fame ‘Fight Wing’ for such an epic fight.”

As the main event of UFC® 165: JONES vs. GUSTAFSSON, which took place on September 21, 2013 at Air Canada Centre in Toronto, Ontario, Canada, both athletes entered the matchup on extensive winning streaks. This event would also mark the third consecutive year that Jones would defend his title inside the iconic venue.

Gustafsson, competing for the first time in Canada, entered the arena with a 15-1 record and a six-fight winning streak that also included a victory over former UFC light heavyweight champion Rua.

Both Jones and Gustafsson traded a series of high and low kicks, as well as punches and elbows, throughout the majority of the first round, until a right hook by the Sweden native opened up a cut over Jones’ right eye with two minutes remaining in the round. Following 59 seconds of trading additional strikes, Jones would be taken down by Gustafsson for the first time in his career, as he had effectively stopped 13 previous attempts during his first 19 professional fights. Alexander would end the round having landed eight significant head strikes to Jones’ five, with Jon landing eight body strikes compared to Gustafsson’s four.

Round two began similarly to round one, with both Jones and Gustafsson continuously moving around the Octagon while connecting via punches and low kicks. With 2:30 remaining in the round, Jones connected on a left head kick, backing Gustafsson off from a takedown attempt. Alexander would employ skills from his amateur boxing background for the remainder of the round, thwarting Jones’ takedown attempts in the process. Gustafsson would land 16 significant head and body strikes, compared to Jon’s eight during the round.

Gustafsson opened the third round with a big combination to set the tone. With Jones having problems from the cut over his right eye, Alexander would continue his boxing attack, changing levels, and landing jabs and uppercuts with Jon countering by connecting on a series of low and high kicks. During the round, Alexander landed 24 significant head and body strikes compared to 19 from Jon. Jones and Gustafsson combined for 55 significant strikes in round three, setting a new record for a UFC light heavyweight title fight.

Round four marked the first time that Gustafsson had ever fought past three rounds in his professional MMA career. With both athletes pushing the pace, Alexander took the early advantage by landing several jabs and hooks, stuffing Jones’ takedown attempts in the process. Jones, bleeding heavily from his right eye, connected on a series of left elbows, stunning Gustafsson by landing a reverse elbow with 35 seconds remaining and capitalizing with elbows and knees with Alexander against the cage. Jones ended the round with an elbow and a flying knee, taking control of the round and the fight in the process. Jones and Gustafsson combined for 53 significant strikes in the fourth frame, which ranked as second-most in a light heavyweight title fight in UFC history at the time.

Jon and Alexander each entered the final round bleeding heavily and they each stayed in the center of the Octagon exchanging punches. Jones secured his first takedown of Gustafsson with 3:00 remaining, but both athletes quickly stood up. Jon would connect on a left head kick with 2:22 left in the round, but Alexander kept moving without showing any effects. With Gustafsson physically exhausted, Jones advanced, landing a series of high kicks and punches as Alexander struggled to stay on his feet. Jon would land three consecutive head kicks, an elbow and a flying knee to conclude the fight.

Jones would win the bout via unanimous decision (48-47, 48-47, 49-46), setting a new record for most consecutive title defenses in UFC light heavyweight history.

Gustafsson’s 110 significant strikes landed against Jones were the second-most by a light heavyweight in a UFC title fight in history at the time and ranked as the most strikes absorbed by Jones in any of his 20 fights, with 45 being the previous high. Alexander attempted 288 significant strikes during the fight, besting the previous high against Jon of 151 by Rashad Evans at UFC 145.

Gustafsson provided Jones with the toughest test of his career to date, while also matching Jon in some of his more favorable areas. A decorated wrestler in high school and junior college, Jones was unable to take Alexander down on 10 of his 11 attempts, with Gustafsson utilizing skills learned from training with former NCAA Division I National Champion wrestler (2008) Phil Davis.

The pair met in a rematch with the vacant UFC light heavyweight title on the line in the main event of UFC 232®: JONES vs. GUSTAFSSON 2 on December 29, 2018 in Los Angeles. Jones would defeat Gustafsson for a second time, via TKO in the third round, to regain the UFC light heavyweight crown. Since recapturing the title at UFC 232, Jones has defended his title three times and recently set a new record for most championship victories in UFC history, with 14, following his unanimous decision victory over Dominick Reyes at UFC 247®: JONES vs. REYES on February 8, 2020 in Houston.

Gustafsson returned to the Octagon on June 1, 2019, in the main event of UFC FIGHT NIGHT®: GUSTAFSSON vs. SMITH, in his hometown of Stockholm, Sweden. Anthony Smith defeated Alexander via rear-naked choke submission in the fourth round. Following his defeat, Gustafsson retired inside the Octagon, ending an 11-year career with a record of 18-6 (10-6 UFC).

The remaining inductees of the UFC Hall of Fame Class of 2020 will be announced in the coming weeks leading to the 9th Annual UFC International Fight Week™, which takes place from Tuesday, July 9 through Sunday, July 12 in Las Vegas.