Jones and Gustafsson Meet in Toronto

"I don't feel a burden being a champion; I don't allow myself to." - Jon Jones 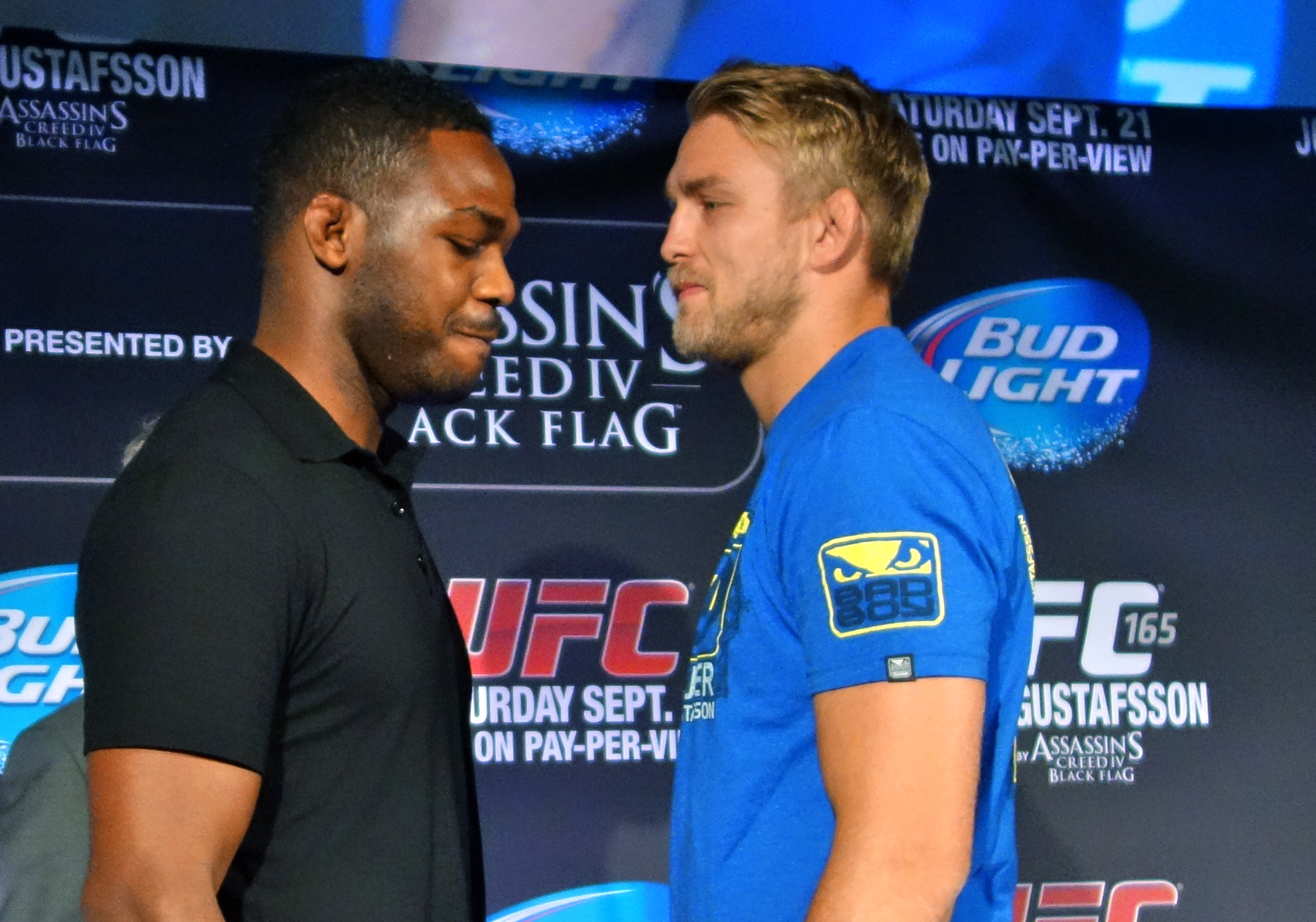 While the state of New York dilly dallies with the inevitable, the largest city in The Great White North reaps the benefits with another enormous pay-per-view and another Octagon appearance from arguably the greatest pound-for-pound fighter on the planet. For the third time in just as many years, UFC light heavyweight champion Jon “Bones” Jones will defend his title at the Air Canada Centre in Toronto.

On September 21st at UFC 165, the always impressive Jones will finally take on a challenger just as physically imposing as the champ in Swedish juggernaut Alexander “The Mauler” Gustafsson. Also on the card is a second belt on the line with interim UFC bantamweight champion Renan Barao squaring off against former WEC bantamweight champion Eddie Wineland.

To whet the appetite of Octagon enthusiasts everywhere and to promote tickets going on sale this Thursday for said event, the UFC held a press conference in “T-Dot” Tuesday with the monstrously sized headlining duo of Jones and Gustafsson, as well as master of Canadian ceremonies Tom Wright.

The tone of the two fighters was a mix of humble and somber, partly due to the championship clash being over two months away and it laying in the wake of this uncertainty the MMA world is feeling because of Anderson Silva getting knocked out by new UFC middleweight champion Chris Weidman at UFC 162. It’s an uncertainty that truly embodies the spirit of the sport in that anything can happen once the cage door is shut.

Obviously, it was inspiring for the 15-1 Gustafsson, who will be taking on Silva’s heir apparent atop the short list of best active and, possibly, all-time fighters. “We're all human beings here and we all can lose,” states Gustafsson, who is currently enjoying a six fight win streak, including back-to-back decision wins over Thiago Silva and former UFC light heavyweight champion Mauricio “Shogun” Rua. “[Chris Weidman’s win] gives me a spark and motivation.”

Prior to a cut sidelining Gustafsson from a return appearance to Stockholm in April, the last fight fans saw of “The Mauler” was an outclassing of Rua in December at UFC on FOX. “[Being forced out of the April bout] was one of the worst experiences of my life, but I've left that behind me and I have my dream fight coming up next,” says Gustafsson, who has the opportunity ahead of him to be the first Swedish UFC champion. “It would mean everything to Swedish MMA and to European MMA too. It would show Swedish MMA to some bigger media in Sweden. We are still some years from US and Canada, but we're getting there.”

On the flipside, the realistically undefeated boss of the 205-pound division, Jones, stated that Weidman’s victory over Silva was also motivational, but in a different way: making sure that doesn’t happen to himself.

“It motivates me a lot too; to watch somebody I look up to like that lose,” tells Jones. “It is a reality check. I try to keep my ego in check when it comes to the fight game. It's first not something I would do, keep my hands down and fight my opponent that way. Also, watching Chris Weidman's dreams come true, I have to make sure to be a dream crusher. It motivates me.”

Turning 26 later this month, Jones is one of the most accomplished fighters to ever grace the Octagon, but one wouldn’t know it from this press conference. While many have characterized the 18-1 native of upstate New York as cocky, “Bones” was almost uncomfortably humble about his incredibly dominant UFC career. In March 2011, Jones stopped Rua by TKO in the third round to claim the weight class’ gold, and he has successfully defended the strap a record tying five times, including his submission wins over Lyoto Machida and Vitor Belfort in Toronto. Simply, all that’s past is prologue to what “Bones” will do in the UFC.

“I don't feel a burden being a champion; I don't allow myself to,” explains Jones. “Knowing that I'm a guy who hasn't really done as much as other champions. Matt Hughes has done more than me, [Georges St-Pierre] has won more titles than me, Anderson Silva has won more titles than me. There are so many records out there that I don't have. When people consider me the #1 fighter in the world - when I don't own many records - it doesn't sit well with me. I feel like I'm still the young guy; I'm 25 years old. I'm still the youngest guy in the division and I don't have the right to be complacent. I feel like I'm still at the beginning of my journey. I'm still learning how to fight, still learning how to deal with the media, and learning how to be where I'm at. It's really just getting started.”

With a six title defenses and a 10 fight win streak on the table for the champ, it’s thrilling to hear Jones talk about his unquenchable thirst to cement in all fight fans’ eyes his supremacy inside the Octagon. “I definitely would like to prove to people that my size isn't the reason why I've made it this far; it's my mental approach to the game,” affirms Jones, who will not have the height advantage for the first time in his UFC career, but will still have a sizable length advantage with his absurd 84.5” reach. “Alexander Gustafsson is definitely the biggest thing going on in my life right now. He is my next title fight, he is my superfight, he is the record I've been dreaming about for years.”

On September 21st at UFC 165 in the “Queen City” of Toronto, two belts are up for grabs as Barao battles Wineland and Jones tangles with Gustafsson. In the main event, the UFC’s light heavyweight division takes center stage as “Bones” collides with “The Mauler” with the champion looking to extend his legacy and the challenger looking to start one of his own. With a hopeful third successful title defense in Canada for Jones, Rogers Sportsnet might need to give "Bones" an honorary Canadian Sportsman of the Year award.