The Nevada State Athletic Commission sent a strong message on Tuesday when it handed out a $50,000 fine to UFC light heavyweight champion Jon Jones and a $9,000 fine to No. 1 contender Daniel Cormier for their actions in the now-infamous brawl in the MGM Grand lobby on Aug. 4.
In addition, Jones will be forced to serve four days of community service in Las Vegas, while Cormier is required to perform two days in his hometown of San Jose, Calif.  Jones vs. Cormier was originally scheduled for UFC 178 on Saturday at the MGM Grand Garden Arena, but the bout was moved to UFC 182 on Jan. 3 after Jones suffered an injury during training.
During the proceedings, both Jones and Cormier spoke on their own behalf to explain their actions and how the brawl escalated into a melee. Both fighters expressed regret and embarrassment for the brawl and its aftermath.
“I want to sincerely apologize to the MGM, to my bosses at the UFC – Dana [White] and Lorenzo [Fertitta] – to my fans, Daniel’s fans, to you guys, the commission. To all the [athletes] I represent in the Muay Thai community,” Jones said during the hearing. “I made us all look bad and as the champion – it was a terrible thing.”
Jones explained that the tension between the two fighters reached very high levels moments before he was set to face off with Cormier on stage.
“When we walked into each other we came together like magnets,” Jones said.
“Leading up to a fight there’s a lot of mental warfare that goes into it. When you have two elite fighters who have never lost – when you get your throat touched like that, for me to not respond may give him an advantage. My retaliation was more about not allowing him to get any type of mental edge over me.” 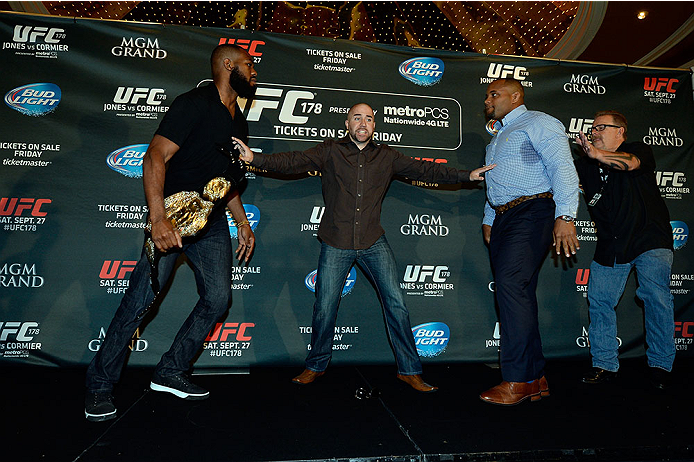 Cormier explained the lengthy, frequently tense history between the two fighters to the commission. The rivalry began many years ago and has been building ever since.
The meeting on stage at the MGM Grand became the setting where pent-up emotions came to a head after years of bad blood, Cormier said.
“When Jon put his head on me – I feel like I have to defend myself. When I feel like somebody was trying to intimidate or bully me I have to defend myself,” Cormier said.
Cormier added that he has to be more responsible because kids and other fighters look up to him.
Jones also expressed his regret, saying street fights are never OK. He revealed that he lost his endorsement deal with Nike because of the brawl, and a potential endorsement deal fell through as a result of the incident as well.
Also on Tuesday’s NSAC agenda was the hearing of disciplinary complaint against former UFC light heavyweight Wanderlei Silva. Silva evaded an attempted random drug test earlier this year and later appeared before the commission to explain why.
Despite Silva’s claims of taking diuretics to rehab an injury – his explanation for avoiding the random test - the commission on Tuesday unanimously agreed to a lifetime ban from competition in Nevada along with a $70,000 fine, which is 35 percent of the purse he received for his last fight appearance.