TORONTO, September 21 – It was mixed martial arts’ equivalent of a Rocky movie, Jon Jones and Alexander Gustafsson battling through five bloody and bruising rounds that captured the best the sport has to offer. When it was over, Jones retained his UFC light heavyweight title for a record sixth time via five round unanimous decision, but not without getting the fight of his life from the courageous underdog from Stockholm, Sweden.

“I’ve been asking for a dogfight for a long time and I finally got the dogfight I wanted,” said Jones. 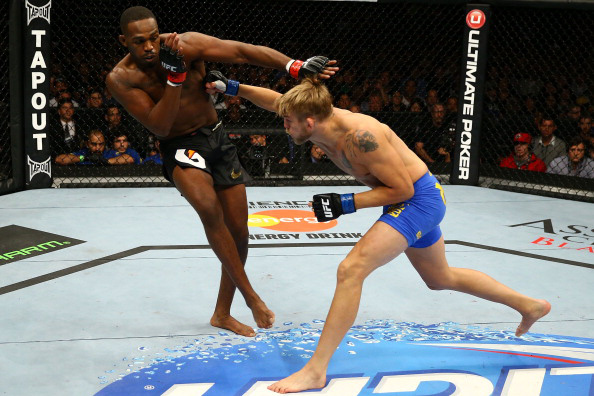 “He was just a tough fighter and that was by far my toughest fight.”

“It was an honor to fight Jon,” said Gustafsson. “He is the champion for a reason.”

Scores were 48-47 twice and 49-46 for Jones, who bested Tito Ortiz’ record for most successful 205-pound UFC title defenses, and did it the hard way, having to survive a cut over his eye and a spirited effort from a challenger who had every intention of leaving with the title “Champion” next to his name.

Gustafsson went right at Jones with kicks that landed and punches that didn’t. Jones’ first takedown attempt came up short, but his own kicks began hitting their mark as he chopped at the Swede’s legs. Midway through the round, Gustafsson just missed with a right hand that had home run written all over it, but the good part for him was that he was getting closer, and his confidence continued to grow, especially after cutting Jones over the right eye. With a minute left, Gustafsson even shocked Jones and the crowd by scoring a takedown. After the two rose, an eye poke by Jones brought a momentary halt to the action, and while Jones went on the offensive after the fight resumed, he was unable to do anything with the upset-minded challenger.

The fight heated up even more in the second, with Gustafsson catching a Jones kick and tripping him to the mat, and the champion subsequently going on a reckless chase of his opponent in an effort to get payback. He didn’t, but if he didn’t know before, Jones certainly knew now that he was in a fight. Jones continued to use his kicks effectively, nailing Gustafsson with a left to the face midway through the frame. Gustafsson took it well and got back to sticking and moving as Jones pursued the takedown but couldn’t get it. The champion’s kicks were keeping him in the points column though. 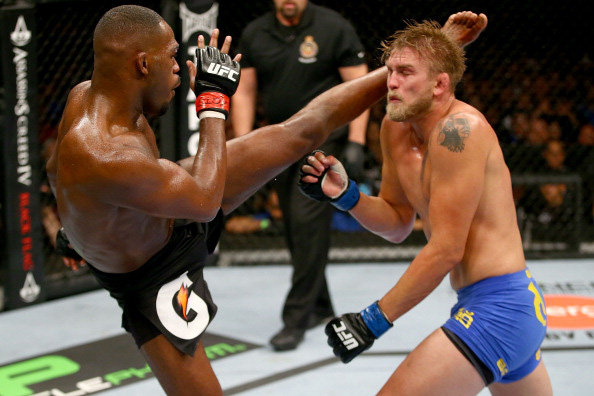 Continuing to switch from orthodox to the southpaw stance, Jones wasn’t throwing Gustafsson off, but he was using it to set up his own kicks, which had become the cornerstone of his offense. Gustafsson focused his strikes upstairs for the most part, landing with some hard punches to the head when he got in close with Jones. Jones saved his response for the final minute with a spinning elbow that landed but didn’t do the damage he expected it to do, and after stuffing Gustafsson’s subsequent takedown attempt, he had to be feeling confident entering the championship rounds.

After seemingly getting into a bit of a rhythm early in the fourth, both offensively and defensively, Jones began getting tagged hard by Gustafsson, opening the cut over Jones’ right eye again and forcing him to look for a takedown, which he didn’t get. But the champ kept moving forward, and after finally landing with the spinning elbow he was looking for, Jones went on the attack, landing with knees and putting “The Mauler” on the defensive for the first time in the fight, with a brawl breaking out in the final 30 seconds that got the crowd roaring.

With five minutes left in the fight, both fighters were understandably fatigued but also intent on leaving the arena with the title belt. Gustafsson started strong, but two minutes in, Jones finally got his takedown. But as he pushed Gustafsson to the fence, the Swede rose to his feet and got 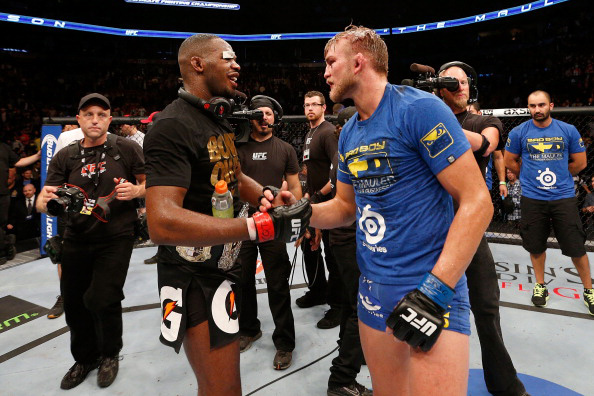 loose. Jones scored with kicks as an exhausted Gustafsson moved forward, but missed with a spinning elbow. A left high kick hit the mark though, responded to seconds later by a spinning back elbow from Gustafsson. A vicious left kick to the head by Jones barely moved Gustafsson but he kept the pressure on, scoring with more strikes to the head and body that may have just sealed the deal for him as the final horn sounded.

Watch the replay of tonight’s event on UFC.TV