Jonathan Pearce Is Just Getting Warmed Up

Jonathan Pearce Has His Sights On Accomplishing Some Big Goals And He's Taking The Next Step At UFC Fight Night: Walker vs Hill.
By Thomas Gerbasi, on Twitter: @TGerbasi • Feb. 16, 2022

The winters are better in Arizona than in Tennessee, but Jonathan Pearce still misses home in Johnson City. It’s the price he pays to chase his dream of glory in the UFC, and while the sacrifices are many, he will continue to make them.

“I've lost about ten of my loved ones since I've been gone, and I knew it was coming when I left,” said the 29-year-old featherweight, who will look to make it three consecutive wins when he meets Christian Rodriguez on Saturday in Las Vegas. “One of them was my granddad. He was a big influence for me in my life. I only had one granddad growing up. The other one had died before I was born. He was my dad's dad - he was the king. I think he hung in there for me to get into the (Joe) Lauzon fight, and I just thought that was so cool. He died before the Lauzon fight. And here I am, carrying on the family name and just trying to do what I do best.”

In the summer of 2019, Pearce earned a UFC contract with a stoppage of Jacob Rosales on Dana White’s Contender Series. Three months later, he was breaking in that contract against Lauzon, but it was the veteran stopping the rookie in the first round.

Undeterred, Pearce rebounded with back-to-back finishes of Kai Kamaka and Omar Morales, proving that he belongs at the elite level, but it was during his media duties pre-Lauzon that he got the sign he needed that he was on the right track and in the right place.

“I had a big interview for my first fight on Contender about breaking my jaw and I think that was the moment when I realized that this was my second chance to be able to do this and you just can't give up on it,” he said. :It's gonna bloom eventually, and I kinda learned that in wrestling already and now I'm just gonna do it on a bigger platform.” 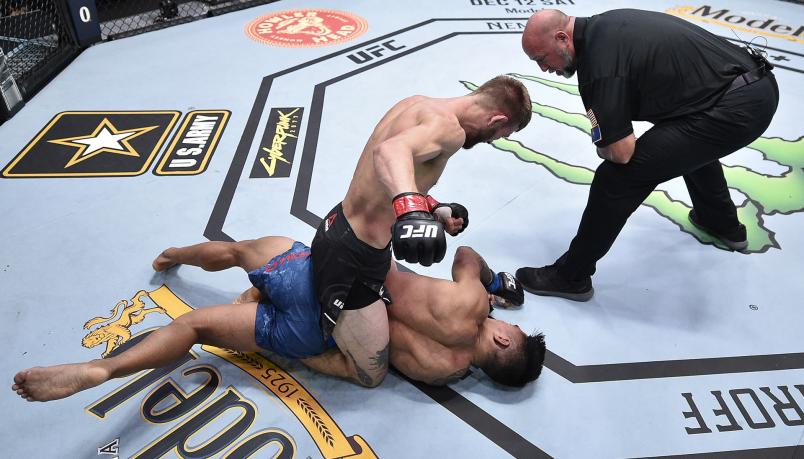 His grandfather would have been proud. Not just because Pearce returned from serious injuries after suffering a blind-side attack in a gym back home, but that he made a commitment to this sport and stuck with it.

“He was like, if you're good at doing it and you like doing it, then follow it,” said Pearce. “He saw how good I was at it and how much I enjoyed it, and he was like, go for it. You can come back and we can go build houses or you can go and fight people. But he knew I had wrestled and I had sacrificed. I'd come in for Christmas dinner and I wouldn't be eating nothing but the eggs and the green beans. He’d ask why and I said I gotta win State. He always kinda understood at an early age that I was probably gonna do something like this.”

And here he is, on the verge of big things in the UFC, just like he always hoped. And while he has momentum on his side and the experience edge on Octagon newcomer Rodriguez, Pearce isn’t discounting his foe.

“It's who fights better that night,” Pearce said. “So I still have to show up that night, and I think I learned that with Lauzon. I feel like if I fought Lauzon again, nine out of ten times that was just the one time he caught me and you've got to take every fight like it could be your last fight, because it could be.”

Not likely for Pearce, who hopes to have a busy year.

“I want a Top 15 ranking and stay undefeated at 145 pounds (in the UFC). I'm just looking to finish everybody I fight, and whoever they give me, I'm ready. I don't think I'm quite where my goals are set yet. I think I'm just getting warmed up.”