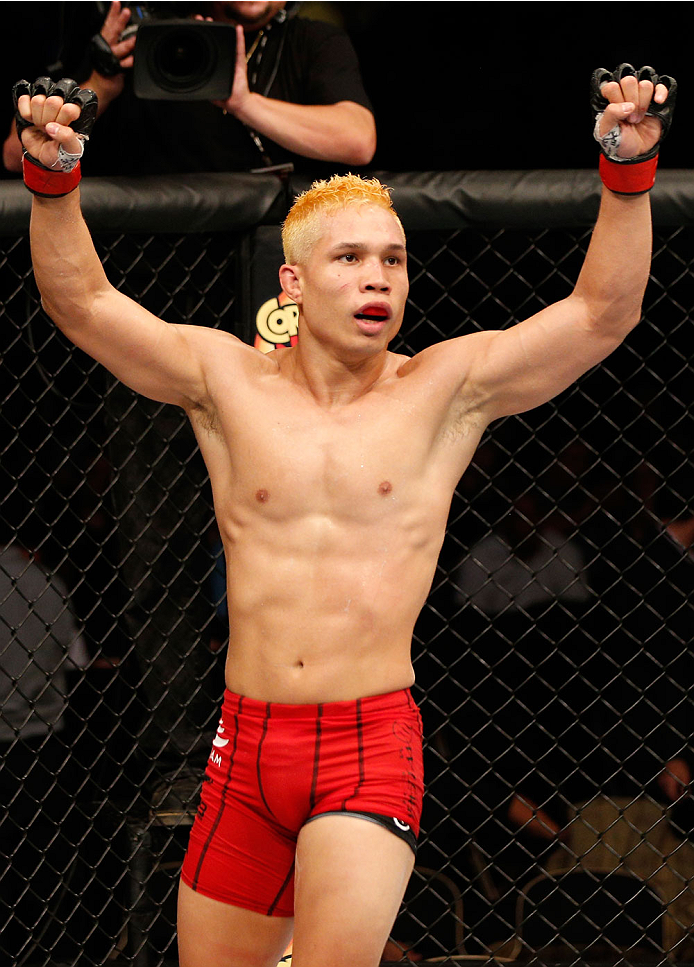 Jon Tuck could have been the bad guy heading into Saturday’s UFC Fight Night bout against Tae Hyun Bang. He probably would be anywhere else if he beat two local heroes in the past, both by knockout. But apparently fight fans in the Philippines, site of this weekend’s card, have evolved past the rest of the globe, because as Tuck describes it, beating Filipinos Eduard Folayang and Tristan Arenal haven’t made him the enemy, but an adopted son.

“In the Filipino culture, they love fighting and they respect the game,” Tuck, a native of Guam, said. “They adopted me as one of their own because I took out some of their best. The culture is similar to that of Guam. They get into it and that’s one of the reasons why I really wanted to compete in the Philippines, because of the fact that they love the sport.”

And they can appreciate that beating a hometown fighter isn’t a sign of disrespect, but part of the sport. It’s why fans in the nation have been waiting for the UFC arrive for its first show there, and why approximately 500 folks from Guam are taking the three-hour plane ride to Manila to see their own fighting pioneer take to the Octagon for the fifth time.

“I don’t put any pressure on myself because I put in the hard work,” Tuck, Guam’s first ever UFC fighter, said. “Being a role model or inspiring people, that’s just a bonus for me. I take responsibility for it because if I can inspire and be better for somebody’s life, that makes me proud and it makes my job even more worth it.”

Tuck, 30, appreciates that there will be a place for him in the history books, but he doesn’t let it weigh him down. What he is aware of, though, is that since his Octagon debut in 2012, MMA as a career isn’t a far-fetched dream for those in Guam anymore, and he couldn’t be prouder.

“There’s a lot of people that are trying to make their dreams come true by winning fights and, of course, getting into the UFC,” he said. “That should be every fighter’s goal. And there are some prospects out of Guam that could rough up guys in the UFC. So there are more of us that will come in the future and whenever they get that opportunity, they have to take it.”

One of them, flyweight Jon Delos Reyes, makes his third UFC start this Saturday against Roldan Sangcha-an, setting the stage for what could be the biggest night in Guamanian MMA history, but again, what matters for Tuck at this moment is breaking the 2-2 deadlock on his UFC record and going past the .500 mark. To do so, he shook things up a bit by spending the majority of his camp in Southern California with Arena MMA, Alliance and Studio 540, and not Arizona’s MMA Lab.

“I couldn’t handle the desert anymore,” Tuck laughs. “I’m an island boy. I have to stay next to the ocean.”

San Diego serves that need for the Hagatna native, but he says his relationship with The Lab in Glendale, Arizona remains strong.

“We’ll always have that bond,” he said. “I live in Guam, and they understand and want what’s best for me. The guys there will always be my brothers.”

Of course, given the tight bond with that gym, one that saw Tuck cornering many of his Arizona teammates in UFC bouts, you have to wonder how a switch at such a pivotal time will affect him. Tuck says that concern never crossed his mind.

“I feel like I’ve had the best training camp I’ve ever had,” he said. “Mentally, I’m much stronger than I’ve ever been in my life and I think that’s gonna play a big factor in this fight coming up. I had no doubts about switching camps.”

He also isn’t concerned about his UFC losses to fellow prospects Norman Parke and Kevin Lee, both which came via decision in competitive fights. Instead, he chooses to take the positives from each fight and move forward, content in the knowledge that he’s still evolving as an athlete and fighter.

“Before competing in MMA and doing jiu-jitsu and competing in kickboxing matches, I started just to lose weight and have an overall healthy well-being,” he said. “I had never competed growing up, and what I’ve learned the most is that I am definitely one of the best fighters in the world. I’m gonna look at all the positive points I can take away from those losses and I know I’m a top ten in the world fighter, and I can touch the belt one day. I’m still evolving as a fighter, and that’s the exciting part, but it’s also scary for my opponents that I’m gonna be facing.”

That’s nice of Tuck to be concerned for his opponents, and he laughs when that’s pointed out to him. But in all seriousness, he’s come a long way from his days as a 215-pounder staying close to the goods produced by his family’s catering company.

“They sold deep-fried treats and the best food on the island,” he said of his pre-fighting days. “It was everything that you could ask for if you’re into chasing food trucks.”

Today though, he’s a fighting pioneer for his nation, he’s in the biggest promotion in mixed martial arts, and he’s got his eyes set on some lofty goals that he plans on reaching as soon as possible.

It’s good to be Jon Tuck.

“I pray that I’m gonna be injury free because I want to stay active,” he said. “I want to get more than just three fights a year, and if I can get five or six fights a year, that’s gonna be awesome because I want to climb the ranks and reach the top. I’m not getting any younger and I feel like I’m hitting my prime. I’ve grown so much as a fighter, and I’m still growing and I want to be able to showcase that while I can and get that belt.”