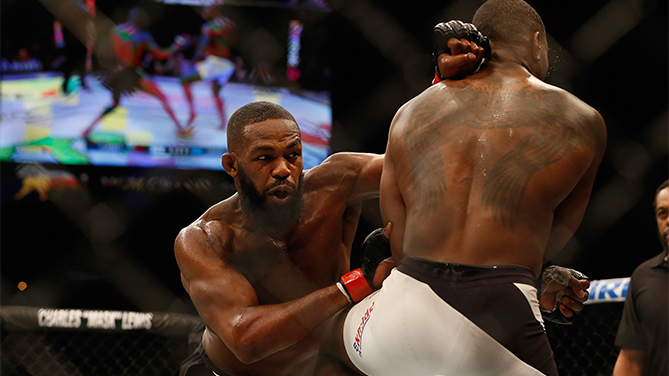 For the first time since March 19, 2011, Jon Jones entered the Octagon without a championship belt, and while he left it with one Saturday night at the MGM Grand Garden Arena in Las Vegas after a shutout five-round decision win over Ovince Saint Preux in the main event of UFC 197, he wasn’t content with his interim UFC light heavyweight championship.

“I don’t think I want that belt, it’s not the real belt,” Jones, who was stripped of the title now held by Daniel Cormier in 2015 due to legal issues, said “I want my actual belt back.”

He will get his chance to take it back when he meets Cormier in a bout that was supposed to take place at UFC 197 before the champion was forced to withdraw due to injury. And while he wasn’t vintage Jones, after being out of the Octagon for more than a year, he was more than good enough to win.

“It definitely took me a while to pull the trigger tonight and I felt like I used 20 percent of the technique I actually know,” Jones said.

Jones fired off kicks to start the bout, and Saint Preux responded in kind, neither landing anything of note until Jones scored with a hard kick to the body. As the round progressed, Saint Preux appeared to be having trouble getting a read on what Jones was going to do next, and it allowed the New Yorker to build an early lead without being spectacular in the process.

Back in his rhythm after the 15-month layoff, Jones began to up his work rate in round two, working well with elbows and punches in the clinch. Saint Preux took everything well and landed his best punch of the fight thus far when they broke and he scored with a right hand. The Tennessee product landed the right again later in the round, but Jones was still controlling matters, with a spinning kick to the head drawing a roar from the crowd.

Fighting at close quarters in Round 3, Saint Preux had some success with his punches, but not enough to bring momentum to his side, as Jones confidently fired off his kicks and punches with little concern for what was coming back at him.

After a solid start to round four, Saint Preux got taken down by Jones, but he got up immediately, a moral victory of sorts. With two minutes left, Jones scored with a second takedown, and this time he landed in side control, where he was able to go to work with his elbow attack. Saint Preux almost escaped, but Jones got the mount position and then his opponent’s back, firing off ground strikes until the horn.

Clearly winded after taking the bout on three weeks’ notice, Saint Preux wasn’t able to put any sort of offense together in the fifth and final round, and a thudding takedown by Jones only added to OSP’s woes. And while Jones wasn’t able to finish his foe, he was able to shake the rust off, pick up a belt and a win, and get ready for “DC.”

“My next fight’s going to be a helluva lot better, I guarantee it,” Jones said. “I’m really excited to be fighting Daniel Cormier.”