Jon Jones - What Does He Do For An Encore? 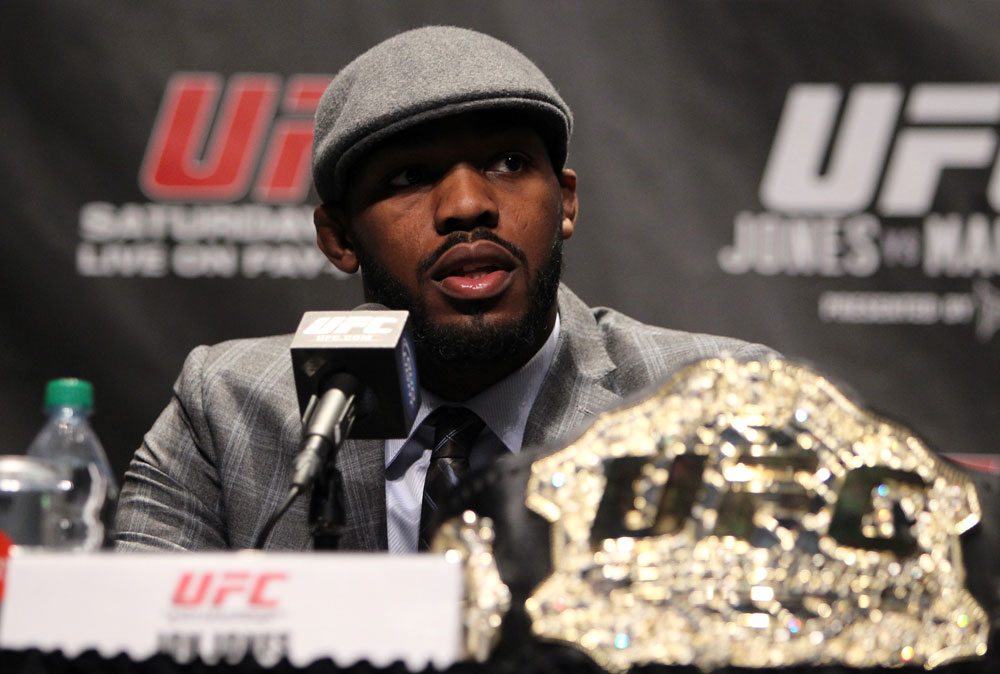 Despite being at the center of a whirlwind 2011 campaign that saw him go from phenom to champion to defending champion in the space of the year, Jon Jones likes to keep things as simple as possible when it comes to his fighting career. There’s no running down the list of contenders, no tape watching of challengers he may fight a year from now. It’s all about what’s right in front of him – now.

“I watch the fights, especially if there are top contenders involved, but as far as really studying them or being obsessed with them or anything like that, I just take them as they come and I just focus on the one I’m fighting next,” said Jones, who’s upcoming opponent, Lyoto Machida, may be the only fighter out there to break that mold.

See, the former 205-pound titlist has been attached to Jones for longer than the time it took to announce their UFC 140 main event this Saturday night in Toronto. And Machida might not even know it, but Jones certainly does.

“I remember it vividly.”

It was Machida the champion who Jones was asked about by a USA Today reporter in June of 2009, and when the New Yorker replied that the Brazilian was “very beatable,” he got caught in a storm of criticism considering that he was only two fights into his UFC career and here he was, talking about the champion of the division.

Little attention was paid to the fact that Jones was the one asked about Machida, and that he later explained that “a great Muay Thai champion” would be the one to beat Machida.

“It started me off with a big group of haters because they were like ‘who’s this kid to be talking about Lyoto Machida?’” recalled Jones. “’ That was my first controversy of my career where people lashed out at me for what I said. But it was something I felt that was true, and my prediction was a hundred percent correct – “Shogun” (Rua) was that great Muay Thai fighter.”

The backlash was a taste of what Jones would get in the aftermath of his March 2011 win over Rua, and that’s usually how it goes for young, gifted, and charismatic athletes like the 24-year old, who has nonetheless taken the negativity with grace and a smile. And as soon as he defended his title for the first time with a fourth round submission win over Quinton “Rampage” Jackson in September, the critics began to fade into the background. Even Jackson gave the champion his just due in a post-fight interview, something that made the fight a win on a number of levels.

“It meant a lot to me,” said Jones of Jackson’s post-fight praise. “But the way I look at Rampage means more. He was so gracious, and he totally earned my respect. He made me a huge fan.”

More importantly though, the win let Jones know that he is on the right track as a fighter and champion.

“That fight really just helped me to believe even more in my abilities, that nothing’s been a fluke, and that our hard work is truly paying off in the Octagon,” he said. “That’s what I believed the whole time, even when I had no right to believe, and I’m really starting to believe now and getting even more comfortable in my own skin, more comfortable with my skill set, and trusting in it.”

The statement of Jones believing when he “had no right to believe” is a telling one, mainly because it shows you how a fighter must think if he’s going to do anything in this sport. You may not blurt it out to the world, but if you want to make it, you have to believe, even against all odds. Jones, despite his status as a junior college national wrestling champion, had no other significant fighting credentials when he entered the UFC for the first time in 2008 against Andre Gusmao, and he’s even admitted to learning some of his early striking moves off youtube.com videos. So what gets you by in situations like that, in addition to natural talent? Guts, smarts, and belief.

“I just realized how cold the world can be, and this is a world with very little mercy,” said Jones. “You gotta go out there and make something of yourself, believe in yourself, and trust in your own abilities, or else the world will pass you by. There’s a quote that says ‘you might as well be happy, because nobody cares if you’re miserable,’ and it’s kind of the same way in MMA. You gotta believe in yourself because the odds are always against you.”

Not anymore. In fact, as Jones encounters Machida, he is the favorite and no longer the hunter, but the hunted. He kinda likes it though.

“I’m definitely very comfortable with it,” he said. “Where they can all watch and try to come up with a strategy for what they need to do, I’m watching the one that’s in front of me and becoming obsessed with his style and everything about that guy. I think that target being on my back is only gonna force me to become better.”

As for Machida, Jones says, “I don’t think he’s adjusted his game too much. The thing about karate is that it’s strict on form and strict on repetition and a way of thinking, and he’s been doing it for so many years that it’s in his hard drive to fight a certain way. No matter who he fights against, it’s nearly impossible for him to try to truly change his style for a certain fighter. I guess he can become better at wrestling or learn some more skills of Muay Thai and jiu-jitsu, but he’s a karate fighter because that’s his life. It’s almost impossible to change a fighter who’s been fighting his whole life a certain way. The Lyoto Machida that fought Shogun, the Lyoto Machida that lost to Rampage, the great Lyoto Machida that originally came to the UFC, I’ve been studying his fights repeatedly, and it’s the same exact thing. There’s not that much unpredictability once you really break him down and study to see what he’s doing.”

If you were anyone else but Lyoto Machida, this would be the right time to hit the panic button, because it’s the moment you realize that as good as young Jon Jones has proven to be thus far in his career, he’s also studied your every move in order to knock you out or submit you. That’s scary, but it’s also something Machida has done to his opponents in the past. On Saturday, we’ll find out who has done their final homework assignment of 2011 the best.

Jones is betting he’s the one. And he hasn’t been wrong yet.