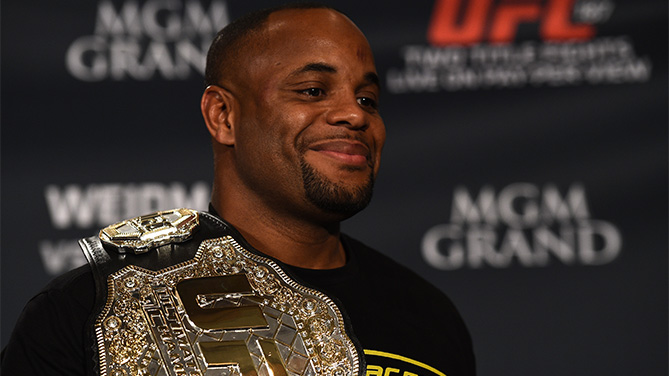 Daniel Cormier smiled Saturday night, but in his head and his heart he knew there was no escaping the long shadow of Jon Jones.
> Order the UFC 187 replay 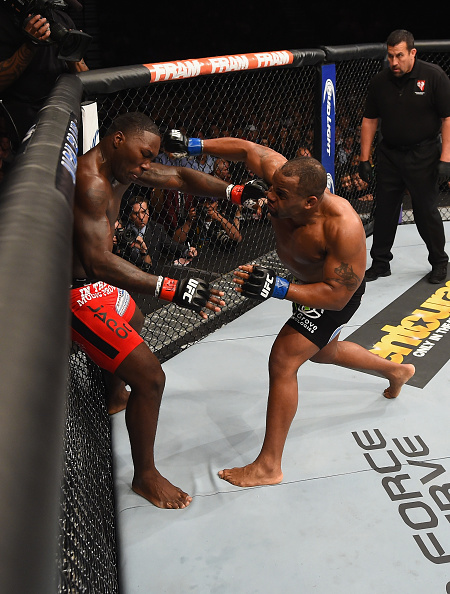 Win or lose, it will always be there. Even as the UFC’s new light heavyweight champion, Cormier understands the inevitability of a fight with Jones.
> Watch Backstage Interviews: Daniel Cormier | Chris Weidman | Dana White | Donald Cerrone
This year? Probably not. Next year? Perhaps. Jones, the now-deposed titlist, has a slew of legal problems that need untangling, so for the immediate future, he is on no one’s radar.

But he will always be there as long as Cormier remains at the top of the division. After subduing Anthony “Rumble” Johnson at UFC 187 with a rear-naked choke in the third round of their fight for the vacant light heavyweight title, Cormier admitted as much.

“I’m waiting for you,” he said, referencing Jones.

Even so, a belt is a belt. Jones will always be on his mind, but Cormier (15-1) believes his title is legitimate and above question.

“You see what’s sitting right there?” he said at the post-fight press conference, pointing at the gleaming belt in front of him. “That’s the gold belt. That thing’s reserved for the UFC champion. I didn’t disqualify myself from competition. Jon did. I am the champion. I fought a very tough guy that deserved to be there.”

Cormier’s victory put a final touch to a card full of exceptional fights, including Chris Weidman’s punishing knockout of challenger Vitor Belfort at the 2:53 mark of the first round in the co-main event. 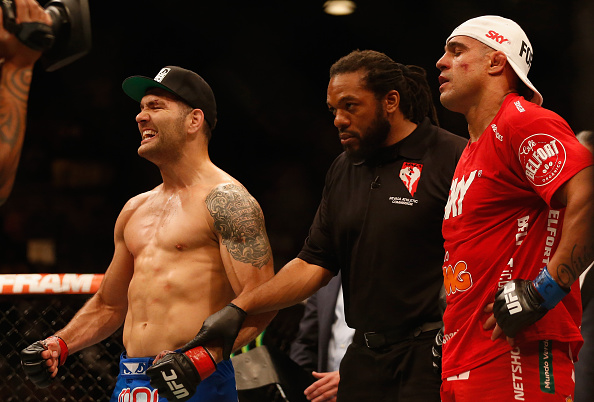 Weidman defended his UFC middleweight belt for a third time, kept his record perfect at 13-0 and extended his streak to nine consecutive wins. Even more, it gave Weidman a chance to chastise any non-believers who doubted him or his belt.

“Hey, stop doubting me!” he told the crowd at MGM Grand. “It’s enough!”

Cormier, of course, will continue to have his own doubters. He lost once to Jones, a unanimous decision at UFC 182 in January, but he got a second unexpected chance at the championship when Jones was arrested on a felony hit-and-run in April.

The thing is, Cormier never should have been in the Octagon against Johnson. It should have been Jones, the rightful champion, defending his title. But having exasperated UFC president Dana White with this arrest and a previous positive test for cocaine, there was little the UFC could do but strip him of the belt.

Johnson acknowledged that Cormier would be hungrier the second time, maybe even desperate. And Cormier executed his game plan perfectly, forcing Johnson against the cage, getting him to the ground and wearing him down with elbows. 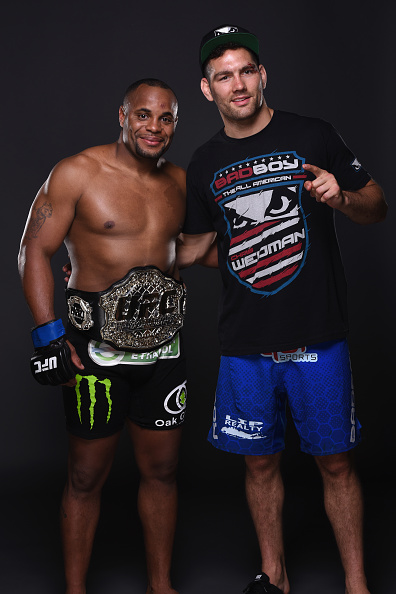 At first, Johnson resisted. Cormier tried six takedowns in the first round and was successful just once. But in the second, he controlled the round by getting on top of Johnson and using his heft to wear down his opponent. When the horn sounded, Johnson was slow to rise, slow to walk back to his corner, slow to take his stool.

That round may have broken down Johnson. In fact, two of the three judges scored it 10-8 for Cormier. He was that dominant.

“He definitely made me carry his weight,” Johnson said, “and he’s heavy as hell.”

Johnson preferred a fight in the center of the Octagon, where he could throw punches and kicks, but Cormier had no intention of squaring off with the UFC’s hardest puncher. The cage is where he wanted to be.

“I’m a grinder,” he said. “I’m a guy that will take you down and make you carry my weight as you’re getting up. I’ll continue to press you, push you against the cage until eventually something will present itself, and that’s what happened.”

For all his success, Johnson has not done well on the canvas. Of his five defeats, four have come via rear naked choke, including a loss to Belfort in 2012.

But Johnson was gracious in defeat. He put the championship belt on Cormier after the fight, and he and Cormier exchanged a long hug when the press conference ended. 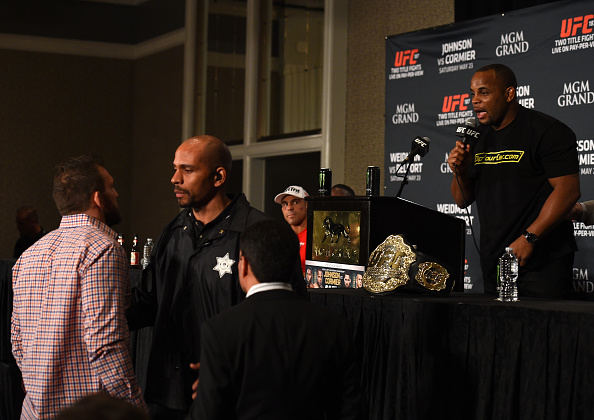 Still, it wasn’t entirely a love fest. Ryan Bader, who twice had fights with Cormier called off, stood at the back of the room and taunted Cormier, who didn’t take kindly to it.

“Get your ass out of here,” he scolded Bader. “This is my press conference.”

But Bader didn’t leave. In fact, he walked toward Cormier before security pulled him away and escorted him out of the room.

Maybe Bader, the No. 5 contender at light heavyweight, will finally get his long-awaited fight with the new champ. Who knows?

Until Jones makes his return to the UFC, Cormier will have to find someone to fight. It might as well be Bader.