“Right now I know that I’m hunted by Rashad Evans, and that’s something that I’m comfortable with.” - Jon Jones 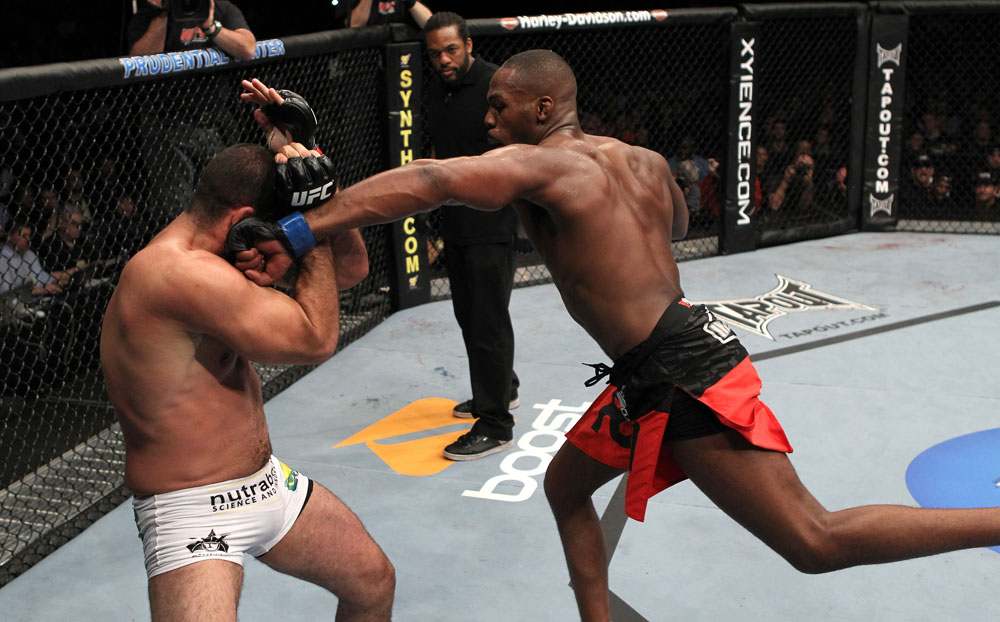 Fight day. March 19, 2011. Forget all the talk that it’s just another night at the office. When you’re fighting for a world championship, you’re not just competing for the belt or the title of “champion”; you’re fighting to alter your life forever. If you can crystallize everything you’ve learned and worked for into 25 minutes and pull off a win over the man who does your job better than anyone else on the planet, you can change everything.

A daunting task like that can play tricks on you mentally, so 23 year old light heavyweight Jon Jones, along with his coaches Greg Jackson and Mike Winklejohn, took a trip to a park in Paterson, New Jersey to meditate and get into the right frame of mind for the night’s bout against UFC light heavyweight champ Mauricio “Shogun” Rua.

If you haven’t heard what happened next, welcome back from your trip to Mars, because if you were anywhere on this planet, you know that as Jones, Jackson and Winklejohn arrived at the park, they were notified that an elderly couple had just been robbed. The three gave chase, with Jones quickly outdistancing his trainers and apprehending the alleged assailant.

All this before the biggest night of his career.

It was a courageous and admirable thing to do, but with so much at stake, what was Jones thinking, especially when Jackson told him to stay back while he and Winklejohn ran forward, and considering that unfortunately, 90 percent of the population probably would have done nothing.

“I feel as if I have an obligation to do the right thing,” he said. “I knew my coaches were with me, and I’m surprised that I got so many accolades for doing it, but when you say that 90 percent of the people wouldn’t do it, I just hope that’s not true. And a big part of me feels that I did what most people would have done.”

More tellingly, despite being 6-foot-4, 205 pounds and one of the most accomplished athletes in the UFC today, Jones wasn’t always “the man”. In fact, he was a shy kid who more often than not was on the wrong end of the fights back in upstate New York.

“I’m from the ghetto in Rochester, and there were times when I wouldn’t protect myself that I regret because I didn’t know how to protect myself at the time,” he said. “I’ve been jumped before and beat up before and it’s kinda like how Mike Tyson said in his documentary, he never wanted to be taken advantage of again once he learned how to fight. I feel the same way. I got jumped when I was a kid, I got beat up, I got made fun of because I was always kind of a good kid, and now that I can protect myself and I have the wisdom to talk myself out of situations and I have the physical power to get myself out of most situations, I feel like I’m obligated to help other people. I feel crappy when I see people who are vulnerable in danger, so I just took action and I’m glad I did.”

Just a few hours later, he took action in the Octagon, stopping Rua in the third round of another dominating performance to win the UFC light heavyweight title. For him, it was business as usual, as every time he has engaged in a UFC fight, the end result was a lot of oohs and aahs and even more accolades. But there is one loss, a December 2009 defeat at the hands of Matt Hamill when he was disqualified for an illegal elbow.

Frankly, if you’re going to lose, this is the way you want to do it, as the disqualification from referee Steve Mazzagatti came after Jones had dominated Hamill from the opening bell. And though the “1” on his record doesn’t look as sexy as a “0” would, what happened is that as Jones rebounded to go on a three fight tear through Brandon Vera, Vladimir Matyushenko, and Ryan Bader, he didn’t have the added burden of protecting an unbeaten slate. That ship had already sailed, and in essence, it made him a more relaxed – and better – fighter.

“To not be protecting a zero is phenomenal for me,” said Jones. “Against Ryan Bader, I guess being undefeated would have helped promote the fight because it would have been a someone’s “0” must go type of thing, but as far as my own sanity, it definitely helps me relax. I feel like I’m a normal fighter who’s struggling to stay on top and to stay flawless in my performance. If I was undefeated, man, it would just add so much more and it wouldn’t just be about performing well, it would be about not losing. Now I don’t worry about not losing, but just winning because I’ve already been defeated in this sport.”

That approach shows a maturity beyond his years, but even that pales in comparison to his demeanor after the Hamill fight, when he took the controversial defeat with a class that resonated among fight fans.

“I got a lot of mail from parents, and even today, a lot of people say ‘the reason I became a Jon Jones fan is because I saw the way you handled that fight and the way you conducted yourself after the fight,’” he recalled. “In every way, shape, and form, it was a blessing in disguise. I don’t want to be that perfect fighter because I’m not perfect at all. It’s good for me to have a blemish in my career because it shows that I can make mistakes. There’s a kid out there who’s looking at us fighters as being perfect people, like their perfect super hero, and it’s good for me to show that I can make mistakes and still bounce back.”

The mistakes have been few and far between since then, if visible at all, yet ever since Jones was crowned champion, the top 205-pound fighters in the world fixed their collective radar on “Bones”, looking for any weakness that would allow them to topple him from the throne. No longer is Jones a hunter; now he’s the hunted, and while he admits that it’s a fact of life that he hasn’t given much thought to, he does know one man who already has him in his sights.

“Right now I know that I’m hunted by Rashad Evans, and that’s something that I’m comfortable with,” said Jones.

It’s a statement you wouldn’t have expected to hear a few months back, but in a professional sport, sometimes it’s necessary to compete against people you’re friends with. That’s the case between the two former training partners, but as a war of words has started to heat up, Jones admits that it’s a bittersweet feeling to know that his next opponent will be Evans and that things are heading the way they have been.

“It’s disheartening, big time, because I know Rashad’s going through a lot of pressure, and he feels betrayed and I’m sure a lot of people are harassing him on the internet,” said Jones. “I see the tweets that people send him, and it’s tough because Rashad’s a great guy, he’s a great father, he’s a great person, and after this fight, whoever wins or loses, it’s gonna be different for us and I don’t see our relationship being the same. Obviously leading up to a fight, there has to be ways a fighter can get himself amped up and motivated, and unfortunately that’s always by crap talking and talking about your opponent’s game and his weaknesses, and it’s a war of words before the actual combat, so I know we won’t be the same, which is very disheartening, but at the same time, I have what he wants right now, so I have to prepare myself to the fullest to defend it. It’s an interesting combination of emotions that I have.”

Yet if anyone can handle those emotions and put them to the side in order to tend to the task at hand, it’s Jones, because for all the talk of his spectacular and lightning-fast climb to the top, he has seen and experienced plenty in his first 23 years. He’s not a kid anymore; he’s a champion, and he’s willing to walk through fire to keep that belt around his waist.