"I know it’s going to have to be something extremely special about the guy
that ends that win streak. I need to be that special guy, and in order
to do that, he deserves my full attention." - Jon Jones 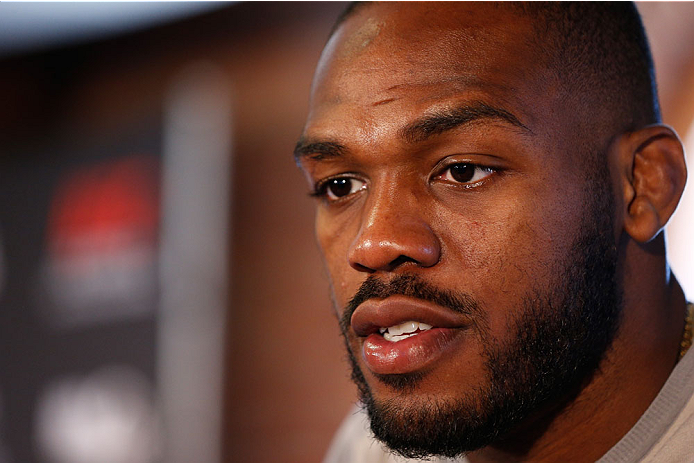 Does it feel like nearly six years since Jon Jones first entered the Octagon as a late replacement against Andre Gusmao at UFC 87 in August of 2008? Not to the man currently holding the UFC light heavyweight title and the top spot on the pound-for-pound list.

“No, it doesn’t feel like it,” he said. “It’s been a long time, but I definitely feel pretty comfortable with where I’m at in the UFC and in the MMA game, and being in the public eye. Time’s just flying and it just feels like it’s always been a part of me. I feel like I’ve been in the public eye my whole adult life.”

He pauses, as if to let it all sink in.

“I didn’t even know it was six years, so I guess it’s going good.”

Yeah, not too bad. But back then, Jones was simply a kid with raw talent who - like many who shared that same description - had built up a nice record on the local circuit but was only going to get truly tested once in the big leagues. And in the big leagues is where many hot prospects show that while they can crush a fastball, the curve will always give them issues, weeding them out pretty fast. Sometimes it’s even a mental issue, the idea that ‘hey, I made it,’ before you’ve proven anything.

Jones never had those issues. Yeah, the talent was there, but so was the mindset, the attitude that had him not only desperate to support his family, but to be something special.

“I remember my mindset being that I wanted to take care of my family and be the greatest of all-time,” he said. “I was so obsessed with (Muhammad) Ali and Bruce Lee when I first started out and I didn’t just want to be in the UFC, but I wanted to be remembered as one of the best of all-time.”

He’s well on his way. Jones beat Gusmao that night in Minnesota, and 12 more wins have followed, seven of them in UFC light heavyweight title bouts. But none may have been more important than the last one, his UFC 165 victory over Alexander Gustafsson. On paper, it will just look like a unanimous decision win, another notch in the belt of the Endicott, New York product. But in reality, it was the type of fight you want to see out of a champion, and especially out of an all-time great. What happens when pure talent isn’t enough, when you run into that guy who you can’t knock out or who is on his best day when you’re on your worst?

We saw it from Anderson Silva when he beat Chael Sonnen in their first fight, from Matt Hughes when he turned everything around in his rematch against Frank Trigg, and from Georges St-Pierre when he roared back from a horrific first round in his first non-title fight with BJ Penn to take the next two rounds and the win. Against Gustafsson, Jones had his defining moment as a fighter.

“At first I was disappointed in my performance,” he said. “I was disappointed that someone was able to inflict so much damage on me, but then after the fight, I was told by one of my mentors, ‘you should love that battle, you should love the fact that you went through such a grueling fight because you proved to yourself and to the world why you’re such a great champion.’ A lot of people like to credit my reach, and the fact that I’m younger, or appear to be bigger, but I think people haven’t gotten to see my heart. I got to show the world the heart that I knew I had but hadn’t gotten the opportunity to show.”

“I definitely needed that fight,” said Jones. “It’s great for my legacy, but it was better for me in my active career to be re-energized and to see that I can be beat, and to make sure that a fight that close never happens again.”

What happens next will certainly be interesting. After such a grueling bout, some fighters aren’t the same again, as they become gun-shy about wading into battle so recklessly again. Others, presumably Jones, will accept a fight like that if it comes, but preferably, he will look to blow out whoever stands in front of him from here on out.

For Jones, the next task is beating Glover Teixeira on Saturday in Baltimore. With 20 consecutive wins on a streak going back to 2006, Teixeira isn’t the kind of guy that gets blown out. That’s kept the 26-year-old champion focused in the midst of the media asking him endless questions about a rematch with Gustafsson, possible future bouts with Daniel Cormier and Phil Davis, and even how he would do if matched up with the retired Liddell.

“What keeps me so focused on Glover is just looking at the guy’s record,” said Jones. “He hasn’t lost in nine years and he’s won 20 fights in a row. I would have to be an idiot to look past him. There obviously has to be something special about this guy for him to go on such an amazing win streak, and I know it’s going to have to be something extremely special about the guy that ends that win streak. I need to be that special guy, and in order to do that, he deserves my full attention.”

He’s not simply looking to preserve the title though.

“My mindset this fight is to finish Glover Teixeira.”

If he does that, then it’s on to Gustafsson and what will be one of the year’s most highly-anticipated rematches. After that, likely Davis or Cormier. And it goes on and on and on, something Jones has already become accustomed to.

“I’m definitely very comfortable with having the target on my back,” he said. “I’m aware that there are great fighters out there thirsty for the opportunity to be where I’m at, and it’s been that way for three years now. I’m comfortable with it, I get more comfortable with every defense, and I would like it for it to be this way for the rest of my career.”

And when that career is over, Jones hopes there is no question about who the best to ever put the gloves on is.

“What drives me is being so close to being considered by many as one of the greatest fighters of all-time,” he said. “Right now, it’s arguable. Fans could say it’s Georges, fans could say it’s Anderson, and some people may believe it’s me already. But to be close isn’t enough for me. What drives me is knowing that all I need is three more good fights, and then the argument is that much harder to argue for me being one of the greatest fighters to ever fight.”