Jon Fitch - Slaying One Dragon At A Time 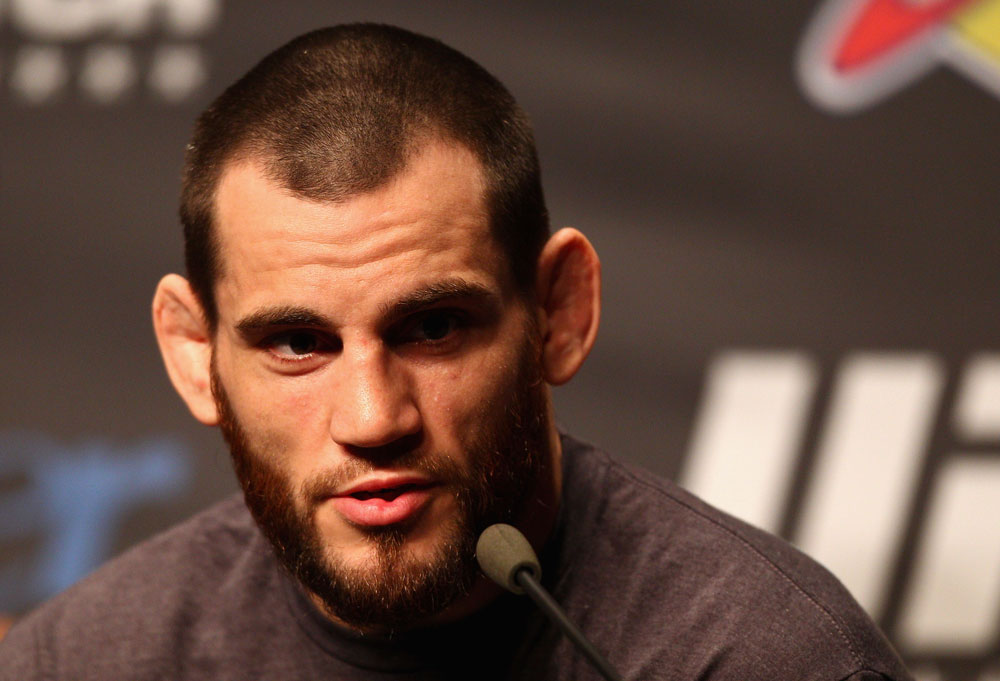 The dragons fall one by one…33…34…and as of last week, 35. The man doing the damage to these virtual creatures is none other than UFC welterweight contender Jon Fitch, and if you don’t catch him at the American Kickboxing Academy gym in San Jose, it’s likely that he’ll be at home, Xbox 360 controller in hand, playing the recently released roleplaying game Skyrim.

“It’s complete freedom in a video game,” said Fitch, who has even started a Twitter account @FitchSkyrimTale to chronicle his adventures. “You can dictate what you want to do when you want to do it and it’s okay because it’s a video game. If somebody gives you attitude and talks back to you, you can just cut their head off in the game and be done with it. (Laughs) In life I think everybody needs that a little bit and that’s the best thing about video games. I don’t get into real-life games, playing basketball or football or track and field, because if I can do it in real life, I don’t really get into it that much in video games. But the things that are impossible to do, like the Grand Theft Autos or Skyrim, I can’t go carjack somebody or shoot up a mall or kill a dragon, but in these games you can, so it’s pretty awesome. You can make your own armor or do magic, it’s pretty fun.”

Fitch has already logged over a couple hundred hours in the game, which was released in November, and of course the questions that immediately pop to mind are a) is this cutting in on his training time, and b) how does he manage to slip this one past his bride, Michele?

“I train hard, and after you finish training, all you want to do is rest and relax,” he said. “And video games are one of the ways you can rest and relax. It’s part of my job, and she understands that, and I make sure I get all my stuff done. I don’t leave messes around, she cooks a lot, so I make sure I wash the dishes and put stuff away and make sure I’m helping out. I make her job easier and she makes my job easy. They (video games) are also therapeutic too because I don’t want to be thinking about fighting all the time. I don’t want to have to worry about my back being sore or what my next workout’s gonna be. I just want to kill this stupid dragon.”

Fitch laughs, a welcome sound after a year that has been trying in his professional life. Kicking off 2011 with a draw against BJ Penn in February, the 33-year old was eager to extend his six fight unbeaten streak in a rematch with the former two-division champion at UFC 132 in July when a March shoulder injury took him out of the fight and out of competition, ending his shot at getting a rematch with welterweight champ Georges St-Pierre anytime soon. Fitch calls the time off a blessing and a curse.

“When I was injured and out and couldn’t do anything, it was a curse because I was just going crazy,” he said. “If I can’t train or can’t be at the gym, I’m not a happy person. And being one-armed, I couldn’t work or do anything around the house. My wife was always on my tail about it (getting antsy to do something). She would say that my job is to heal while I’m off. So it was frustrating to not be able to do anything for a little while. That was the curse part of it. The blessing part is that it gave me a chance to focus on different things, and as my health started coming back I was able to work on different techniques, and watch MMA and the game from a different perspective.”

It was a slow process to get his shoulder back in working order and then to regain his fighting shape, but the worst part may have been watching the welterweight world go round, as Carlos Condit and Nick Diaz jockeyed for the number one position while Fitch sat on the sidelines.

“What are you gonna do?” he asks. “When you’re injured you’re on the shelf and you don’t really exist until you’re healthy again. No one really talks about you or puts you in the thought process of that mix because you’re injured and you’re out. So you have to accept that, and the faster you accept that, the easier it is.”

Eventually, Fitch got the doctor’s green light to fight, and the former Purdue University wrestler was matched up with former Oklahoma State standout Johny Hendricks. The two meet this Friday in a UFC 141 main card bout, and it has the potential to be a good one.

“He’s got a strong left hand, good clinchwork, he’s a good wrestler, good cardio, and he’s a good all-around fighter,” said Fitch of Hendricks. “I think I excel in a lot of those elements and I think that my experience and ability to blend everything together is what’s gonna overwhelm him and win me the fight.”

If Fitch nails down the victory, it will be his 13th in 15 tries. That’s a lot of slain dragons. Hendricks would be another nice trophy for his list, but the fire-breathing dragon with the imposing claws is St-Pierre, the only man to pin a loss on Fitch in the UFC. Even a win over Hendricks won’t put Fitch in a title fight though, as a knee injury will keep GSP out of action well into 2012, and the champion’s first fight back will be against the winner of February’s interim title fight between Diaz and Condit. So Fitch knows he has a wait ahead of him.

And a shot against the winner of Condit-Diaz wouldn’t be a bad prize either if St-Pierre isn’t ready until the fall.

Sharpen that sword, young man. You’ve got a busy year ahead.