"I get excited for challenges like this, and this is definitely a big challenge." - Jon Fitch 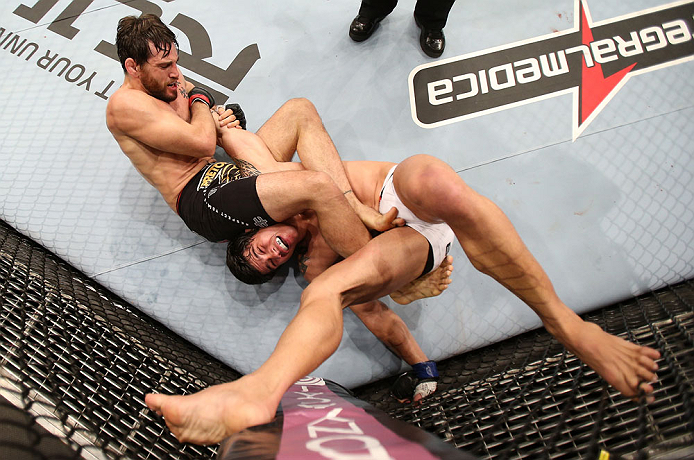 If Jon Fitch didn’t already have a signature walkout song – “Rusty Cage” by Johnny Cash – the perennial welterweight contender could stride to the Octagon this weekend to the sounds of ‘90s one-hit wonder Jesus Jones.

After years of trying to figure out what it would take to get back to a welterweight title shot and attempting to chart a course for the future in his head, the perennial contender has chosen to simplify his thinking.

“I don’t believe in time; I don’t think time exists,” began Fitch, who put an end to a two-fight winless streak back in October with an entertaining unanimous decision win over Brazilian prospect Erick Silva. “(Time is) a man-made creation, and all it really is is the measurement of objects passing through space. Depending on what field of that you’re from, space is either ever-expanding or ever-contracting, so the objects in space that we’re measuring are never in the same place twice, so how can something strict like time exist if those things and those measurements are never the same?

“I joke around and tell people that I have my own scale for age also. I say that I’m turning 25 this year,” continued the 27-4-1 welterweight, who turns 35 at the end of February according to conventional thinking. “I believe that once you hit 30, you should be allowed to count backwards again until you hit 21. Then you have your second 21st birthday, and then you count forward again until you hit 40. From there I haven’t decided if I want to count backwards again to 30, and have a second 30th birthday or if I’ll just continue going forward.”

His laugh breaks the awkward silence that comes when the person who is supposed to be leading the discussion has no idea what to say next.

“The other aspect is living in the moment. Focusing on what’s in front of you right now is the best thing for you. If you start thinking too far into the future, people start putting limits on themselves that way. `In three years I’ll be this old, and that’s too old to make a run for this or do that’ because of these made up rules and regulations people follow that have been passed down from another generation or their peers or whatever. I don’t believe in that. I believe in creating your own reality around you how you see fit.”

The cerebral competitor adopted his new mindset after the roughest patch in his six-year UFC career, and a period of financial uncertainty.

After battling to an unsatisfying draw with BJ Penn at UFC 127, Fitch was forced to the sidelines with a shoulder injury. He returned at UFC 141 in December, and was promptly knocked out by surging contender Johny Hendricks in just 12 seconds, the first time he’d gone without a victory in consecutive bouts since the fourth and fifth fights of his career.

He was dealing with lingering injuries heading into the Hendricks fight, had to pull out of a planned fight with Aaron Simpson in the summer after suffering a knee injury during training camp, and felt the financial strain that comes with living in California and not fighting frequently enough.

In advance of his bout with Silva at UFC 153, Fitch talked about his need to open up a little more, and give the fans a more entertaining show, admitting that a loss would likely mean it was time to get “a real job” in order to deal with the fiduciary challenges he was facing.

What resulted was one of the most entertaining back-and-forth battles of the year, with Fitch coming away with a unanimous decision win, and the pair earning Fight of the Night honors.

“I think the biggest thing was just focus; eliminating too many thoughts and too many concerns about what was taking place in the moment,” said Fitch of the changes he made in advance of sharing the cage with Silva in Rio de Janeiro back in October. “Whether it was that one individual fight, that one individual training camp, or that one individual day of training – you can’t start thinking about what is this next fight going to bring me? What’s going to happen after this? Who am I going to fight next? All those things, I think I had too much going on in my mind to be really focused on being myself, and the best version of me that I could be for the fight.

“I didn’t really change much about my style or whatever, I think I just gave myself more focus for the individual fight, and that allowed me to be the best me that I could for that fight. I think focus brings another level of performance out of me, and I don’t think that next level of performance that I’m currently operating at will be something that people will be dissatisfied with.”

That is music to the ears of fans that are eagerly anticipating his showdown with Maia on Saturday.

After straying from his grappling base and seemingly plateauing at middleweight, Maia has been rejuvenated since moving down to the welterweight division, following up his awkward debut win over Dong Hyun Kim with an emphatic first-round submission victory over Rick Story on the same UFC 153 fight card that featured Fitch’s tussle with Silva.

Running through Story established Maia as a dangerous addition to the welterweight ranks, and a man some might choose to avoid, but not Fitch. He welcomes the opportunity to step into the Octagon with the decorated Brazilian grappler, and looks forward to the challenges that come with this matchup.

“I get excited for challenges like this, and this is definitely a big challenge,” offered Fitch of his impending meeting with Maia. “He’s a very dangerous opponent in areas where I’m strong, so it’s going to be a very fun test. He’s definitely very tricky on the ground; he’s got a slow, methodical ground game that is very smooth. He’s able to transition very smoothly into submissions and his control positions. He’s not super-vicious with ground-and-pound; he may grind and control you into the submission, but he may not do a lot of damage along the way.”

In addition to simply being one of the best grapplers in MMA, Fitch believes part of Maia’s success since dropping to welterweight has come as a result of his size. The six-foot tall Brazilian has long limbs, which allows him to do things on the ground that opponents might not be expecting.

Fortunately for Fitch, he’s got someone with similar attributes helping him prepare daily in San Jose.

“We have 185-pound champ Luke Rockhold, and he’s one of those guys who is a great example of that. He might not have the exact same base jiu-jitsu as some other people, but because of his length, he’s able to do some things that other people could never do, and I couldn’t do. Because of that, they’re able to hit submissions in different places that you wouldn’t expect, and their control is different in different ways.”

A talented grappler in his own right, Fitch showed off his defensive abilities on the ground against Silva, fending off a rear naked choke attempt for a large portion of the second round. He’s been called “unchokeable” for his ability to avoid getting caught, but while he appreciates the accolade, he’s not at all interested in putting the title to the test in the cage with Maia this weekend.

“That’s something I would rather not test,” he laughed. “Maybe someday if he would like to train together maybe I could try that out, but I would prefer to keep him as far away from my back as possible. That’s kind of a bad place to have Demian Maia.”

As much as he’s looking forward to the challenge of facing Maia this weekend, more than anything, Fitch is just happy to returning to the cage is quick succession. After enduring two of the most challenging years of his career, the soon-to-be 35-year-old – or 25-year-old by his count – just wants the chance to be active and productive in 2013.

“Getting the chance to fight regularly is pretty nice; it’s something you take for granted when you’re fighting three times a year. I’m super-excited to start off this year with a fight in February, and hopefully I’ll be able to crank out quite a few this year.”