Jon Fitch - On Fatherhood and Fighting

"You can pick and dissect as much as possible, but at the end of the
day, it’s a fight. It’s a matter of who wants it more and who is able to
establish their game on the other guy." - Jon Fitch 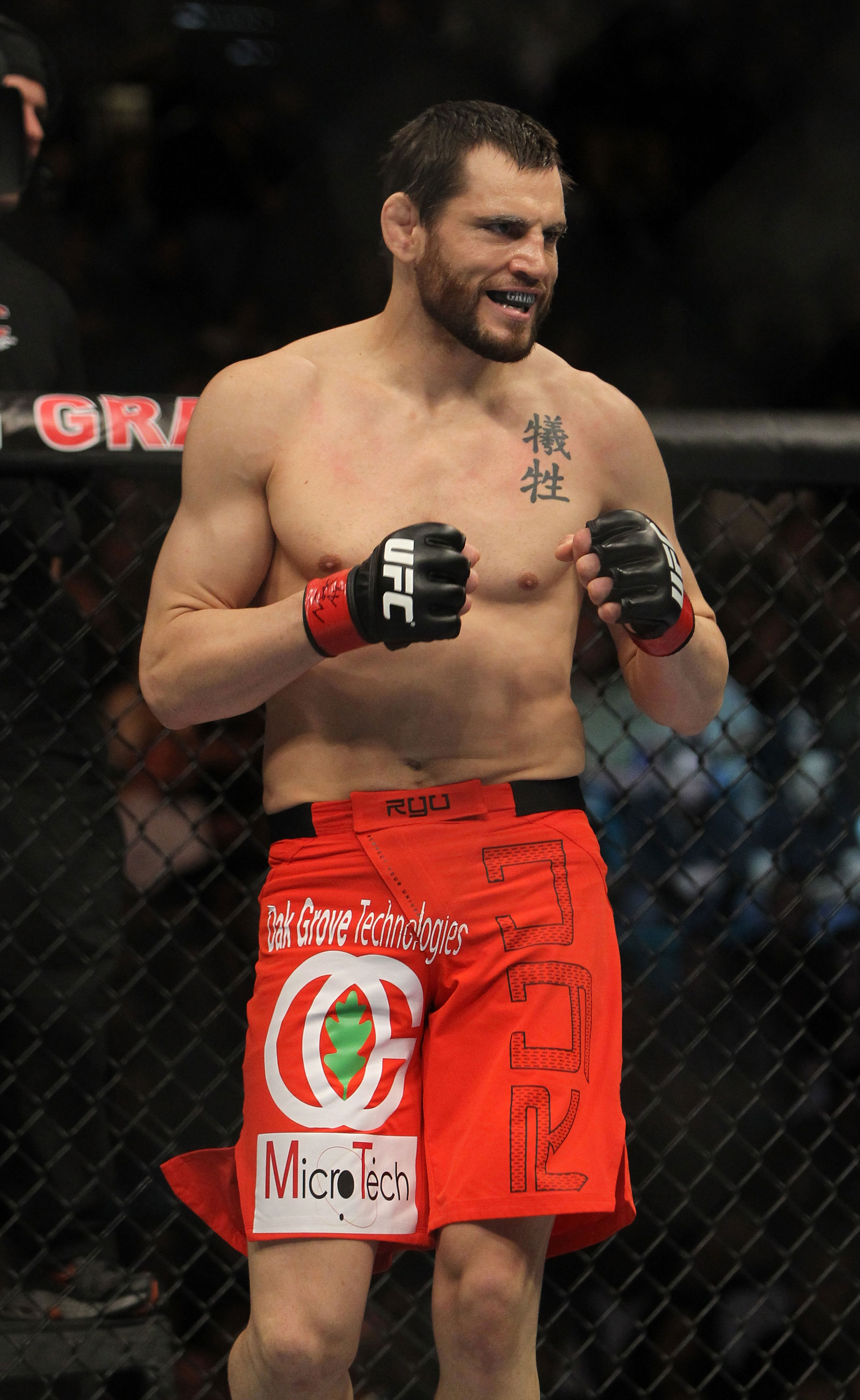 As a perennial contender in the UFC’s welterweight division, Jon Fitch always has plenty of eyes on him. On Saturday night, when he battles Erick Silva in UFC 153 main card action, the two most important ones will belong to the fighter’s newest fan, his son Mason, who Fitch and his wife Michelle welcomed into the world in February.

The arrival of the newest Fitch, a life-altering event any way you slice it, was also a rebirth of sorts for the 34-year-old father, who could count the birth of his son as the day when one of the most discouraging 12 month periods of his career ended.

In the year preceding Mason’s birth, Fitch had battled to a disappointing draw with BJ Penn at UFC 127, underwent shoulder surgery, then got shockingly knocked out in 12 seconds by Johny Hendricks at UFC 141, a bout he entered with a second degree tear in his MCL.

“I didn’t get to wrestle, didn’t get to grapple the whole time,” said Fitch of the lead-up to the Hendricks fight last December. “I just boxed and did cardio, that was it. I know I should have pulled out and postponed the fight, but even if my leg would have been broken or cut off, I would have walked into the cage that night. I’m strong headed and I still believed I was going to be able to win the fight with one leg.

It’s an attitude Fitch was born with, and one honed by years of wrestling in high school and then Purdue University. If you can walk, you can fight. If you can’t walk, crawl. Then you can fight.

“As a wrestler, you push through injuries, push through pain, and you forget sometimes what you are capable of because you are being held back by physical limitations,” said Fitch, who finally paid the price for his stubbornness against Hendricks. But when you couple the birth of his son with a nice long break to heal up and get back to one hundred percent, Fitch is finally back to feeling like himself again.

“My body’s been kind of broken over the last year and a half and this is the first time I’ve really been healthy in that time. I haven’t really felt like this in a long time.”

“This is the first time I’ve been able to kick in over a year.”

You can hear it in his voice, that excitement building for what has turned into one of the UFC 153 card’s most intriguing matchups. But the time off after the Hendricks fight wasn’t all full of rehab and champing at the bit to get back into the Octagon. Remember, the former world title challenger is a dad now. That means no more video games. Well, not as many. But he’s cool with that.

“He’s like my live-action hero now,” Fitch laughs. “I get a hand in helping to create him and build him up and level him up instead of a video game. It just takes a little bit longer.

“It’s different, but it’s a natural change, because your instincts just take over,” he continues. “Your priorities shift and it’s not like something that had to be forced. I find myself wanting to play with my son and hang out with my son. It’s not like I had to give anything up; I just found something better to do.”

Fitch also saw the long-awaited release of the documentary about his challenge for Georges St-Pierre’s welterweight title in 2008, “Such Great Heights,” a critically acclaimed look inside the fighting life and those surrounding Fitch as the American Kickboxing Academy. And despite it being filmed over four years ago, there’s not a dated feel to it.

“It’s a really cool thing, and so much has changed since the movie was filmed,” he said. “We remodeled the (AKA) gym after that and it looks different than what it was in the movie, and then we moved locations, so the gym that was in the movie doesn’t even exist anymore. And to see the team grow and the individual people grow, and to see people’s careers go to where they are today, it’s pretty cool to see that little time capsule. I’m very lucky that opportunity came along for me and the guys who put that movie together did such an amazing job telling that story.”

And unlike some MMA documentaries, Fitch’s tale - despite the loss to St-Pierre – isn’t a 90 minute downer. It’s the story of a bunch of hard-working athletes chasing their dreams. In other words, it’s real without being real depressing.

“It’s a positive story, it’s something upbeat, and it shows you behind the scenes of what MMA is about and what these fighters are about and what they’re going through,” said Fitch. “Even if you remove me from the movie, it’s a really compelling film with the guys who are up and comers and just starting out. It’s real interesting stuff.”

On Saturday, the story continues. Four years and seven fights after the St-Pierre bout, Fitch will be looking for his first win since 2010 against Brazil’s latest phenom in Silva. “Indio” is an explosive athlete who is dangerous everywhere, and if he’s for real, it’s this fight that will prove it. Fitch knows the kid is good, but he expects that he’ll be better on fight night.

“I know what I need to do, and it doesn’t matter who’s in front of me,” he said. “It’s about making them come to my world, and not worrying about them. I’ll be ready for what he has to bring to the table, but I’m fully confident that me being healthy and being in this mindset, there’s nothing that he’s going to come in that night with that I won’t be able to handle.”

Is that the part we sometimes forget, that this is a fist fight, where the one leaving with his hand raised is the one that implements his game plan, and not who adjusts to his opponent’s plan?

“It’s about enforcing your will on the other guy,” said Fitch. “You can pick and dissect as much as possible, but at the end of the day, it’s a fight. It’s a matter of who wants it more and who is able to establish their game on the other guy.”

Fitch wants this one, and he’s well aware that there are naysayers out there waiting to bury him while anointing Silva as the next big thing. It’s a downside of life in the fight game, as you’re in one day and out the next when it comes to public perception. So as a new father, what Fitch say to Mason, knowing the pitfalls of the sport, if his son wanted to follow in dad’s footsteps one day?

“I’m gonna prepare him for a life,” said Fitch. “I’m a big believer that a parent’s true and only responsibility is to prepare your child to survive. Your job is to prepare that child to take care of himself and the sooner the better. So he’s gonna be wrestling, he’s gonna learn jiu-jitsu, and he’s gonna learn fighting, but it’s not going to be anything he’s forced into. It’s kind of the family trade. Regardless of whatever he chooses to do in life, he’ll always have that to fall back on. I would like to be able to give him that skill set to be able to go and teach someday, so then I can be confident that he’ll always have a job because he’ll always this set of skills that people will always want to learn. So if he decides to be a scientist or a race car driver, or whatever, no matter what happens, he’ll always have something to fall back on where he can make money and take care of himself.”

And what about the downside?

“Even with the downsides of this business, it’s still pretty damn fun,” he said. “I still think it’s a much better life than living inside the box where most people do. Most people live inside this structure where they have to wake up a certain time of day, they have to put in eight hours a day, they have to report to a boss, and do this and this. And I don’t like living in that system.”

Yeah, not Jon Fitch. He likes to train and he likes to fight. The former is over, the latter is coming up on Saturday. Time for Mason to watch daddy go to work.