"I’m only getting stronger, and the longer I do this, the better I get." - Johny Hendricks 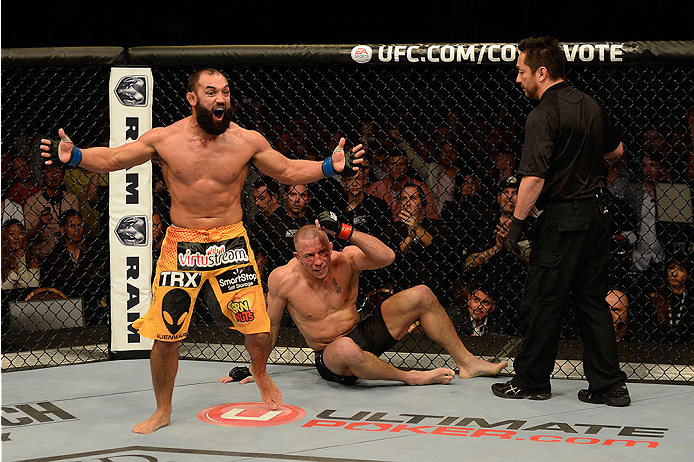 The 3am phone call from UFC President Dana White wasn’t what Johny Hendricks was expecting. In fact after a day with his family in Disney World, the UFC welterweight contender laughs, “I was exhausted from walking 50 miles. I thought it was a dream.”

Hendricks went right back to bed after being told by White in December that he was going to get another shot at the 170-pound title, but the next morning he knew that it was no dream.

“I woke up and I had all these missed calls and texts. I guess it was real.”

It was the perfect Christmas present, and despite the reality of the situation that will see Hendricks fighting Robbie Lawler this Saturday for the vacant welterweight crown, getting the call was a dream that followed a nightmare less than a month prior, when the Oklahoma native lost a controversial split decision to the man who vacated the title, Georges St-Pierre.

“You never really get over it,” said Hendricks of the GSP fight, which many observers believed he won. “You just learn to live with it. But you can’t just dwell on it; you’ve got to try to move forward and learn from it.”

So what did he learn from his first five round championship fight?

“You learn 1) you can go the distance and 2) that you did prepare yourself the right way,” he said. “Those are two important things, that your camp went well and you were able to go five rounds. That’s huge. And not only that, but confidence wise that you were able to go in there with a guy that hasn’t lost in a long time and make him look like he’s never looked after a fight before. Those are the things that you can just take as positives.”

Less than a month after the grueling November 16 bout, St-Pierre announced that he was taking a break from the sport and vacating the title. Hendricks wasn’t surprised at the announcement in the slightest.

“I knew that Dana White said we were gonna have a rematch, and after a fight like that, I don’t think he could handle another one,” he said. “I’m only getting stronger, and the longer I do this, the better I get. And also the better my camps get. So in this next one I’ll be stronger. I already feel like I’m in better shape than I was for my last fight.”

But with St-Pierre no longer an active member of the roster, will winning the belt lose a little luster for Hendricks knowing that the Canadian star isn’t the one he beat for it? Not a chance.

“Georges St-Pierre was the person holding the belt the whole time I’ve been trying to get it,” he said. “So that’s why I always said I want to beat Georges St-Pierre. Now if it was Robbie Lawler or Carlos Condit, I’d be looking at those guys. It’s all about the belt, it’s not about the person behind it for me. That 20-pound belt that Dana White puts around your waist, that’s what it’s about.”

And despite all the build-up to his first shot at the title and its emotional aftermath, going through that all again – and especially so soon – isn’t an issue for Hendricks, who will enter the Octagon this weekend in his adopted hometown of Dallas, Texas.

“No, not at all, because I get another shot at it for one,” he said. “Two, it’s in Dallas, so that’s another reason to be excited for it, and three, it’s always about the belt. As long as I keep it that it’s the belt that motivates me, then I’ll always stay motivated. I want to be the number one guy and I want everybody to be shooting at me. I want the target on my back. And now I have the opportunity to be that guy, to be the person that everybody’s coming after, and that’s what I want.”

Being the best. It’s been Hendricks’ obsession since he first stepped foot on a wrestling mat, and as soon as he walked into the Octagon as a mixed martial artist. So while some competitors refuse to think about that moment of victory in order to keep from jinxing themselves, for Hendricks, that’s the only thing that fills his mind as Saturday night approaches.

“That’s always in the back of your mind or in the front of your mind,” he said. “You want Dana White to wrap that belt around your waist and hear Bruce Buffer say that you’re the new welterweight champion. Those thoughts are always on my mind, and that’s what drives me and what I want more than anything.”