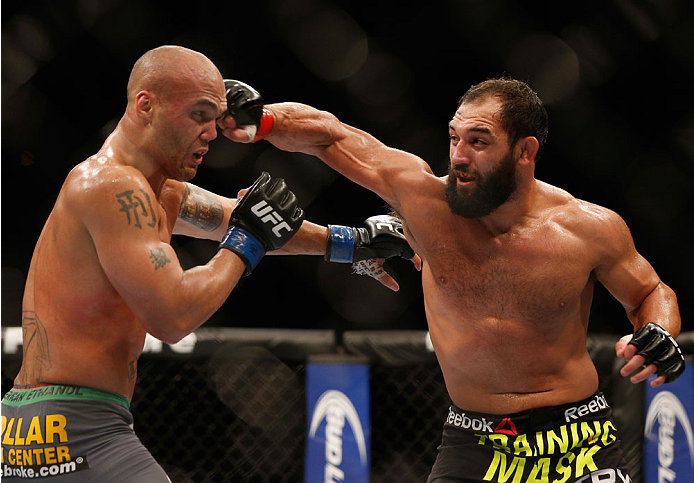 McCarran International Airport is always overflowing with people leaving Las Vegas who feel they were bamboozled by the house when big money was on the line.

Similarly, former UFC welterweight champion Johny Hendricks has felt hoodwinked twice in the span of 13 months in Las Vegas by judges seeing “Bigg Rigg” on the losing end of two five-round wars that he and many others felt he won when UFC gold was on the line.

“With the judging in the last fight, it is what it is,” Hendricks said. “I am 1-3 in Las Vegas (in the UFC). I have only won once in Las Vegas and that was when I knocked out Jon Fitch. I lost to Rick Story, I lost to Georges St-Pierre and I lost to Robbie Lawler. That is where all three of my losses have been. Call it coincidence or whatever. I am looking at it as coincidence or I’m hoping it is.”

The 31-year-old with a 16-3 pro record took home the then-vacant UFC welterweight title last March in Dallas in a Fight of the Night against Robbie Lawler and, nine months later, set out to defend it for the first time in a rematch with “Ruthless”. Part deux against Lawler did not pan out as well for Hendricks in two of the three judges’ eyes. The action was comparable, with both heavy-hitters feeling most comfortable scrapping on the feet. While he still believes he won, Hendricks sees a particular strategy employed by Lawler may have swayed judges.
> Watch Hendricks vs. Lawler I on UFC FIGHT PASS

“Realistically, he tried to control the first 30 seconds and last 30 seconds of each round - if he could,” Hendricks said. “Whenever I go back and watch the fight, the best I can give him is three to four minutes of the fight that he was very aggressive in. The other 21 to 20 minutes was me trying to work the takedowns, working combinations and keeping him off-balance. I think I outstruck him in that fight. When I watch it, I forget about the judges’ score and I look at what happened in the fight. What did I do good and what did I do bad?”

What Hendricks thinks he did “bad” was simply not knocking Lawler out, or at least dropping Ruthless with one of his signature Bigg Rigg strikes.

The former four-time NCAA Division I All-American and two-time NCAA Division I National Champion wrestler has shown serious “take people off their feet” power inside the Octagon. Hendricks is one of only four fighters in UFC history to own three or more knockouts in less than a minute each, with his most recent such win occurring two and a half years ago in his Knockout of the Night of Martin Kampmann. And it’s that “old Johny” that Hendricks is busting his butt in the gym to get back to.

“Where can we start throwing the ‘old Johny’ in with the new,” Hendricks asks. “I got so caught up in being technical and being a slick boxer, being a slick kick boxer. I think I shocked the world how quickly I adapted to those skills. Now, it’s about going back to the old Johny who got me to where I was. My goal was always to fight to finish, but I haven’t felt like I had the power to finish. This camp, we focused on getting back to that power. I have guys who I’ve been training with for three years saying, ‘Holy crap! You feel stronger in this camp than any other camp.’”

Up next, Hendricks is returning to Dallas for a top contender’s collision with Matt “The Immortal” Brown at UFC 185. Starting in 2012, Brown cut a path of destruction through the welterweight division by scoring seven wins, including six KO finishes. The Ohio native’s streak came to an end in a Fight of the Night decision loss to current champ Lawler in July, but both fighters have visions of UFC gold in their future and know that an impressive win this Saturday would put them one giant leap closer to realizing their goal.

“Matt Brown is a tough dude,” Hendricks said. “We both can fight and we are both going to come to fight. I don’t think I have had a boring fight and I don’t think he has either. I want to get back to where people can’t figure out what I’m going to do in the fight. I want to get back to keeping the fans on the edge of their seat and I know Matt Brown is the same way. I’m looking at it like I’m his meal ticket right now. If he wins this fight he can say he wants a title shot. I have to fight that much harder because I want my title back. That’s what I’m striving for. This fight is to prove I am the champ and I’m coming back for my belt. This fight is to make sure everybody knows that I am the number one guy.”
> Tickets still available for UFC 185 in Dallas

To get himself back to that power-punching form, Hendricks has focused a ton on weight - shedding it and lifting it. Instead of the usual monster cuts from 215 pounds to 170, Hendricks has kept himself trimmer at around 195 pounds with the help of his wife, Christina, cooking him every meal. At Velociti Fitness, Bigg Rigg has gotten back to his college wrestling roots of throwing around barbells and plates and getting old-school strong again.

This Saturday, two of the division’s best will duke it out in search of a fan-friendly finish and a future shot at UFC gold. “I want to be that ‘old Johny’ that if I hit you, you know it,” Hendricks said. “I had that power before, but I can’t wait to see what power I have now. I’m going to go out there and get my hand raised and make sure the fans leave happy.”
> Check out the full UFC 185: Pettis vs. Dos Anjos fight card