Johny Hendricks - His Aim is True

"I’ve gotta walk in there with confidence and I’ve gotta believe that I can beat that guy across from me, and what better way to prove it than by being in his face from the start..." - Johny Hendricks 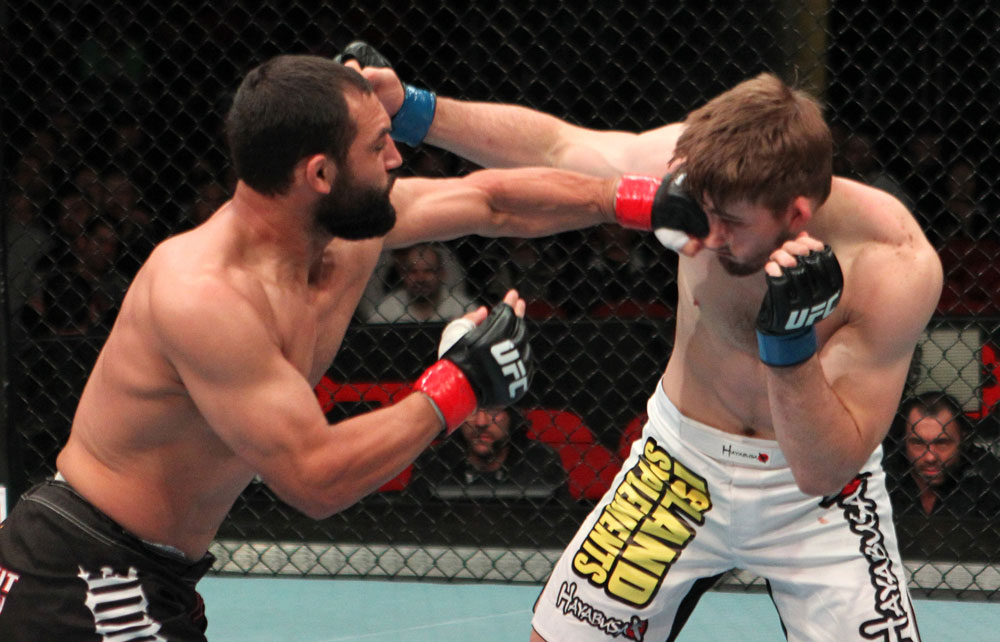 It was the wrestling equivalent of beating Georges St-Pierre, BJ Penn, Jon Fitch, Nick Diaz, Carlos Condit, Jake Shields, Josh Koscheck, and Thiago Alves in succession, but that was par for the course for two-time defending NCAA champion Johny Hendricks as he tore through the National duals in 2007.

“I wrestled 10 matches, and out of those 10, I wrestled two through eight,” said Oklahoma State University standout. “I wrestled almost everybody in the top 10 and I won every match.”

Needless to say, the spectacular run drained him, and he needed a break. But there are no breaks for wrestlers, especially during the season, so that was simply out of the question.

“At that point, I was like ‘I have to get away.’ I needed to get away from wrestling for a couple days and clear my mind,” recalled Hendricks. “If they couldn’t beat me at that point, they’re not gonna beat me anywhere they want to. But I ended up not being able to take the time off that I needed because coach (John) Smith just couldn’t say ‘hey Johny, go away for two days,’ and then everybody else still has to practice. If I could have gotten a week off from everything, I think I might have done some things differently, but that was something that I learned from.”

What he learned was that sometimes too much of a good thing can become a bad thing. Hendricks sailed to the finals of the NCAA tournament again that year, this time with a 56-0 record. But in match 57, he lost to Iowa’s Mark Perry, spoiling his perfect season and his quest for a third National title. When it was over, he was lost.

“I prayed for like two weeks straight,” he said of the days after his defeat against Perry. “I was like ‘what am I gonna do with my life?’ So every night I prayed. I said ‘I’m too young to stop competing, just show me something that I can do.’ Within two weeks (Team Takedown’s) Ted Ehrhardt called me. I went out to Vegas, I got knocked out (in sparring by Phil Baroni), I woke up the next day, and I was like ‘I want to do it.’ (Laughs) Who gets knocked out completely cold, can’t remember the rest of their day, and you wake up the next morning and say ‘hey, I want to do this.’ That’s so weird.”

At least he said it. But all joking aside, mixed martial arts was a natural for the native of Ada, Oklahoma, and by September of 2007 he was making his pro debut with a third round TKO of Victor Rackliff. It’s been practically all smooth sailing since then, with the only hiccup being a 2010 decision loss to Rick Story. But the most important thing for Hendricks thus far is that he took the lessons from his wrestling experience and applied them to MMA. And it had nothing to do with what happens in the gym.

“There’s always times in my camp when I’m like ‘oh my gosh, I’ve done this (competing) for 23-24 years of my life and I’m tired of cutting weight,’” he said. “Of course those days hit me, and what I gotta do is come home and say (to my wife) ‘honey, we’re not gonna talk about fighting; let’s just go do something.’ And then after we go do something, I’m like ‘okay, let’s just talk about life.’ You’re constantly training, and when you’re constantly preparing for something, you need that kind of break, that mental lapse where you can say ‘today, we’re not gonna do anything. We’re gonna talk video games, we’re gonna talk hunting, we’re gonna talk about anything but what I’ve got coming up.’”

“If you live and breathe fighting, and you do it on top of that, you’re gonna hit a point in your life where you’re like ‘oh my gosh, I gotta do something else,’” Hendricks continues. “You have to keep yourself in check. I love the sport so much, that if I eat, breathe, and think about it constantly, I know that you can get burned out.”

Aiding him in his quest, Hendricks and his Team Takedown squadmates moved their homebase from Las Vegas to Dallas, putting the 27-year old close to his wife and daughter. It’s made a monumental difference in his life.

“It’s everything,” he said. “I get to come home, my wife’s happy, my daughter’s happy, and it makes a better environment to come home to. In Vegas, we were excited to fight because that meant we got to come home and see our family. (Laughs) And as people know now, I’m an outdoorsman. I love hunting and fishing, and I love the country. And in Vegas, there’s none of that. Now, I can drive 10 minutes from where I live right now and be in the country. I can be out there and I don’t hear no cars, I don’t hear nothing. All I do is look at stars and I can space out. I like being out there in the middle of nowhere.”

Hendricks’ latest passion is bow fishing, which, as you can probably tell by the name, requires shooting fish with a special bow and arrow. And yeah, you guessed it, it’s not easy.

“I would say it’s 50 percent luck that you hit it and 50 percent that you’re a good shot,” laughs Hendricks, who nonetheless can find parallels between bow fishing and fighting.

“There are a lot of sports out there that are like that,” he said. “On some of the better fighters, once you get up to where I’m starting to get, with the last couple of fighters that I fought, you have to really set up everything. In bow fishing, whenever you pull back on the bow, you gotta make sure everything’s lined up perfect to get the kill shot. And you might miss. You might set up a shot three or four times, but the more you try, the better you get and the more success that you’re gonna have. So in fighting, let’s say the hook’s just not landing. Well, I just can’t stop using the hook; I gotta set it up better.”

The quest to continually learn, pick up new things, and figure out the best way to get the best performance out of himself is an admirable trait. It’s also one that forces you to take ego out of the equation, something many believed Hendricks would never be able to do. But as he points out, the path he’s always followed is to be one way in the gym and another in competition. And that one way in the gym was to be humble.

“That’s the way I was in wrestling in the room,” he said. “I wasn’t that way out on the mat. And I’m also not that way when I fight. I’ve gotta walk in there with confidence and I’ve gotta believe that I can beat that guy across from me, and what better way to prove it than by being in his face from the start, and making him wish that he wasn’t in the ring with you or on the mat with you.”

“My senior year, I couldn’t win a match,” he continues. “My senior year I would leave practice mad every day because I just couldn’t win. I could beat the lower level guys, but my backup, I couldn’t beat him. But that’s what keeps that drive. If you constantly win, what do you when you go home? Do I need to run? I keep winning, it’s not a big deal. But if you go home and you get beat every day, you’re gonna do a little bit extra because you’re getting your butt kicked. And you want that to stop.”

Mixed martial arts is no different for him, so when he lost to Story last December, he didn’t brush it off as simply a bad night and hit the after party. He had more important matters to tend to.

“I tell people all the time, what makes a champion? It’s not who holds the belt. A champion in my mind is somebody who comes in every day, they give 110 percent, and if they lose, how do they carry themselves? Of course they’re gonna be upset, but they’re gonna be humble and say ‘hey, he was the better fighter.’ But with saying that, you also have to be able to improve yourself. So my whole thought process was that as soon as that fight (with Story) was over, I went upstairs and watched that fight. And I watched the fight. And I watched the fight. I didn’t go to bed until like 2:30 in the morning because I watched that fight like nine times – stop, rewind, what happened here? So with that loss, Rick Story made me a better fighter. And that’s what I wanted. You can’t lose and think you’re gonna stay the same. Once you lose, you gotta find your flaws.”

And to aid him in finding them, he invited Story to train with him. Story accepted. So did another past opponent, TJ Grant, who has helped Hendricks prepare for his UFC 133 bout with Mike Pierce this Saturday in Philadelphia. For the Oklahoman, it’s just part of the process. He bounced back from his lone loss with a Knockout of the Night win over TJ Waldburger in March, and now he’ll look to keep the momentum going against Pierce. But one thing’s for sure – win or lose, he won’t make the same mistake twice.