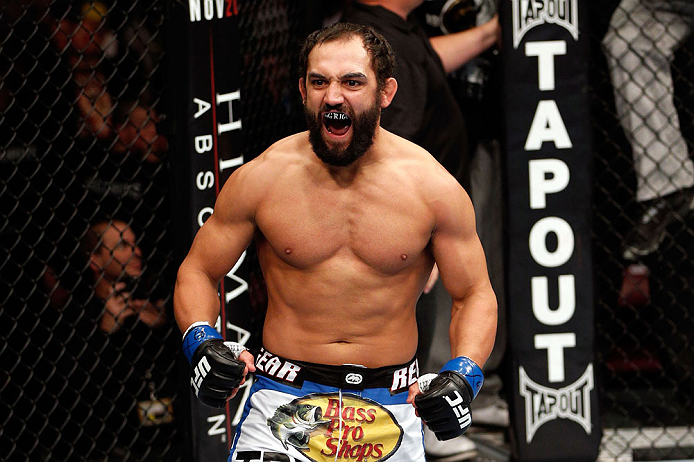 No one would have really faulted Johny Hendricks if he had spent the last three months publicly bemoaning the UFC’s decision to book welterweight champion Georges St-Pierre against Nick Diaz this weekend at UFC 158 in Montreal.

In fact, a good number of people probably would have lined up behind Hendricks to shout supportive comments like “Yeah!” and “You tell ‘em Johny!” as he made points illustrating why he – and not Diaz – should have been the one listed as “challenger” in Saturday’s main event title fight.

With five consecutive victories, including back-to-back wins over Josh Koscheck and Martin Kampmann, the 29-year-old southpaw from Ada, Oklahoma has done just about everything you could ask of a fighter when it comes to making an emphatic case for title contention.

Hendricks ended 2011 by knocking out perennial contender Jon Fitch in just 12 seconds, and then earned a split decision win over Fitch’s long-time friend and former AKA teammate Koscheck in May to push his winning streak to four. The night St-Pierre returned to defeat interim champion Carlos Condit at UFC 154, Hendricks dropped Kampmann with the same powerful left hand that starched Fitch 11 months earlier.

In spite of all of his recent success and the consensus public opinion being that the former two-time Division I National champion wrestler from Oklahoma State should be the next man to share the cage with the long-reigning welterweight champion, the UFC tabbed Diaz instead, ceding to St-Pierre’s request for a meeting with the former Strikeforce titleholder.

You can why a three-month tirade from Hendricks directed towards St-Pierre, Diaz, and the current championship situation would be understandable, maybe even justified.

But that’s just not who Johny Hendricks is, and he’s not about to become that kind of guy either.

“Good Lord willin’, it happens,” says Hendricks sincerely in regards to getting the chance to fight for the UFC welterweight title. “It is what it is. You gotta sit there and say, `All right – I haven’t done this, I haven’t done this; what’s gonna get me to the next step? Do I have to call out somebody? Do I have to say certain things?’ I took a step back, and I was like, `I’m not gonna change who I am just to get…’”

He pauses, looking for the right words, mindful of saying the right thing – or perhaps not saying the wrong thing.

“I always say that I’ve got girls,” continues the proud father of two. “One day, if they watch my fights – they see what kind of person I am, and I’m sitting here trying to raise them a certain way, and in the video it shows a totally different person, they’re gonna be like, `Why do I have to listen to you? Look at this video right here.’ And that’s a path I definitely don’t want to cross, so I was just like, `All right – I’m gonna take a step back, calm down, and just keep moving forward.’”

He laughs, thinking of the day his daughters grow up and start to challenge the rules he and his wife Christina have laid out for them. The thought also puts his current professional situation into perspective as well.

“Who cares if it’s not that one,” he adds. “Good Lord willin’ I can get my hand raised for this one, and then I can go.”

For the second time in a row, Hendricks will compete in the penultimate fight of the evening with St-Pierre defending his title in the finale at the Bell Centre in Montreal. After needing just 46 seconds to stop Kampmann before the French-Canadian champion bested Condit at UFC 154, this time around it is Hendricks who will share the cage with “The Natural Born Killer,” though that wasn’t the original plan.

Initially, Condit was slated to rematch surging Canadian Rory MacDonald in the co-main event, with Jake Ellenberger tabbed to take on Hendricks in the middle fight of the weekend’s five-fight Pay-Per-View main card.

It wasn’t exactly the course the heavily bearded contender known as “Bigg Rigg” wanted, but one he came to accept. Now that he’s moved up one more place on the marquee, Hendricks is focused in on the positives, and using this weekend’s meeting with Condit as another opportunity to make his case for a chance to fight for the welterweight title.

“It was not until I got a fight,” Hendricks answers when asked how long he carried the frustration of being passed over in favor of Diaz. “I was like, `Well they got a fight; when am I gonna fight?’ I’d like to wait; that’s what I was trying to do the whole time – I was going to take a step back, and just wait.

With that outlook framing his return to the cage, Hendricks says he wasn’t too concerned with who the UFC lined up across the cage.

As much as that logic applies to Condit as well, there are a number of other elements that factored into Hendricks’ decision to step into the void created when MacDonald was forced from his rematch with the former WEC welterweight champion as well. While some may see it as a risky proposition, the engaging and positive Oklahoman who now calls Dallas, Texas home sees only good things about the matchup, even if he happens to end up on the wrong end of the result.

“He held the interim belt for eight months, and he just fought GSP,” Hendricks says, beginning his assessment of the benefits of facing Condit this weekend. “If I can go out there and compete with Carlos Condit – compete; I’m not saying I have to knock him out, but I have to get my hand raised. That’s the most important thing, and it doesn’t matter how I do it.

“If I can do that, and then that’s still fresh on everybody’s mind from the GSP fight. If I do good against Carlos Condit, then they’re going to be like, `Well, (Condit) was just in there with GSP. He’s gotta go next.’ That was my main thought whenever I found out I was going to fight him. I was like, `Sweet! This is awesome!’

“If you lose, guess what? You say, `Why did I lose? How did I lose?’ and we pick ourselves up. Sometimes if you lose to the champ, it takes you a year-and-a-half to get back there, but if I lose here, it might only take me two fights. I’m still going to be in the top 10 and all that kind of stuff, so I think it’s a very win-win situation.”

Though Hendricks is stepping into the cage with Condit on Saturday night, there are invariably going to be myriad questions about St-Pierre and Diaz directed his way in the days leading up to the event. The main event competitors have dominated the headlines thus far, and it’s sure to only increase as fight night gets closer and closer.

With the next step in his career somewhat tied to what happens between the champion and challenger after he’s done sharing the cage with Condit, Hendricks hasn’t been giving the main event tandem a moment of thought since he entered camp, focusing first on Ellenberger, then on Condit, and that won’t change in the final few hours before the event either.

“Who cares about them?” Hendricks asks rhetorically with a chuckle. “I don’t care about Georges and I don’t care about Nick Diaz. My main focus is Carlos, because if I overlook him, (1) I’m a big moron, and (2) he can easily defeat me. If I don’t give Carlos 100% of my focus, it could be an early night, or it could be a long night that ends badly. I have to really make sure that nothing outside of this fight matters; nothing, until March 16th when I get my hand raised.

“It’s gonna be a tough fight,” says Hendricks of this weekend’s pairing with Condit. “Like I said before, he’s a tough opponent. I see it as I’m going to have to be an all-around fighter to get the win, and I see myself getting my hand raised. That’s my #1 goal right now – not to finish anybody, but just to get out there and get my hand raised. That’s the most important thing.

“Hopefully after this fight I am getting that title shot, and I get to move forward with my career.”