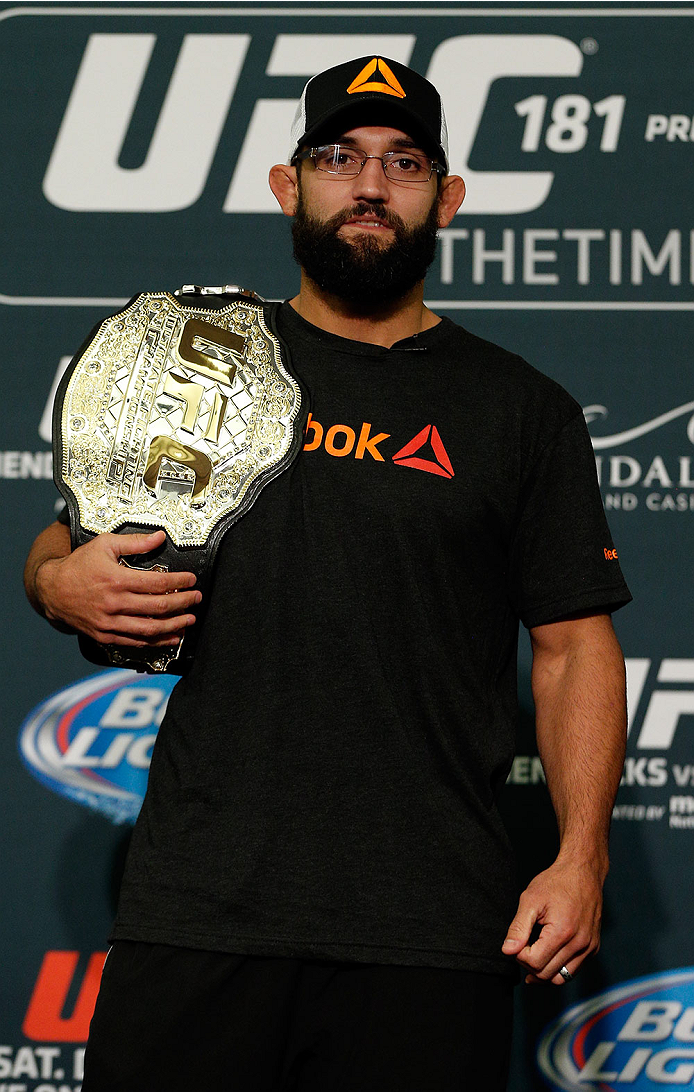 Good news for all UFC fans: Johny Hendricks is expecting that on Saturday night, we will see a repeat of the five-round Fight of the Year candidate he engaged in with Robbie Lawler in March. Well, at least that’s what he’s trained for.

“I've prepared for the worst, and if the best thing happens, then I'll take it,” Hendricks said. “But I'm preparing that it's gonna be another 25-minute all-out war and we're gonna throw punches and get hit and that's what I'm ready for. If I go in there thinking anything less, it's dumb.”

That’s got to be a daunting prospect for anyone not named Johny Hendricks. But the UFC welterweight champion is cut from a different cloth than most. Even before picking up the title with his win over Lawler at UFC 171, he talked excitedly of being the fighter everyone in the division was gunning for, and he meant it. And it wasn’t about the money or the fame or anything else that goes along with being a UFC champion; he just loves to compete.

“Yeah,” he laughs when asked if he has to win all the time. “It doesn't matter what I do, and that's sort of the wrestler way. (Back at Oklahoma State) We would go to places and it would start out as a fun, friendly game and then it would be like who can run the fastest, who can hold their breath the longest, who can do this, who can do that? Everything turned into a competition. It never failed. Any trip we went on, it always revolved around that. And the wrestler in us would never say 'oh, I know I couldn't win this.' Our mindset was 'I'm gonna win this.'”

With two NCAA titles and now a world championship on his resume, Hendricks is used to getting his way, especially in mixed martial arts. A lot of that has to do with his wrestling, his tenacity, and his mindset, but most put it down to the power in his left hand. And though most assume that knockout punchers like Hendricks have a little mean streak in the Octagon, that’s not the case with the Ada, Oklahoma native.

“There's no reason to get angry or mean about anything,” he said. “And also, what I've learned is that the less you can be mean and the less you can do those things, the better off you're gonna be because you have to make sure you control your emotions. If your emotions get out of whack, you're going to be burning a lot of energy and a lot of focus in places that you don't need to.”

It’s why on a day when several heated staredowns took place during weigh-ins for tomorrow’s UFC 181 card, Hendricks was smiling. Some of that was probably due to the fact that he was going to get to eat after making the 170-pound limit, but the rest, he’s happy to be here in a position where he can fight a fellow elite welterweight, defend his title, and possibly go back home to Texas with it on Sunday morning and then enjoy the holidays with his family. To some, that’s too much future to think about, but again, Hendricks’ specialty is breaking the mold, so why not ask him if he feels he can keep that belt with him for a while.

“You've got to always set goals, and in those goals, I would like to try and clear out the division,” he said. “But I also have to know my limitations and that plays from fight to fight. Let's say I'm able to win all these matches for two, three years, well, guess what, there will be younger and better kids coming up, and I'm only getting older. So after each fight, you have to weigh yourself.”

I guess the answer to that question, if you read between the lines, is yes, I can hold this for at least a couple more years. But for the 31-year-old, thinking about the future should never take away from what’s going on today, and today, he is the UFC welterweight champion, the man with the bull’s eye on his back, and if you think he’s complacent after achieving the goal he set for himself when he started fighting, you would be dead wrong.

“I'm never satisfied,” he said. “And that's one thing that not only wrestling, but my dad and (OSU) coach (John) Smith and all my coaches have taught me. Once you hit something, you can never be satisfied. You always have to strive to be better. Now it's how many times can I defend it, how can I do this, how can I do that? That's my mindset. Now I know that I'm going to get the best out of everybody, and that's what I've been waiting for and striving for - to have the target on my back. This is where it starts making it fun for me. It's gonna be kill or get killed, in a sense, and I've got to make sure I train the hardest that I can and do the right things so I can avoid that (losing) at all costs.”

So it’s another five-rounder with Lawler again? Only if “Ruthless” Robbie shows up with his A game again.

“If you're not gonna give me your best, then let's find somebody who is,” Hendricks said. “I thrive off of that. That's what wakes me up every day.”

“It's not a fight, it's a competition, and that's what I strive for.”