Johny Hendricks - Breaking All the Rules 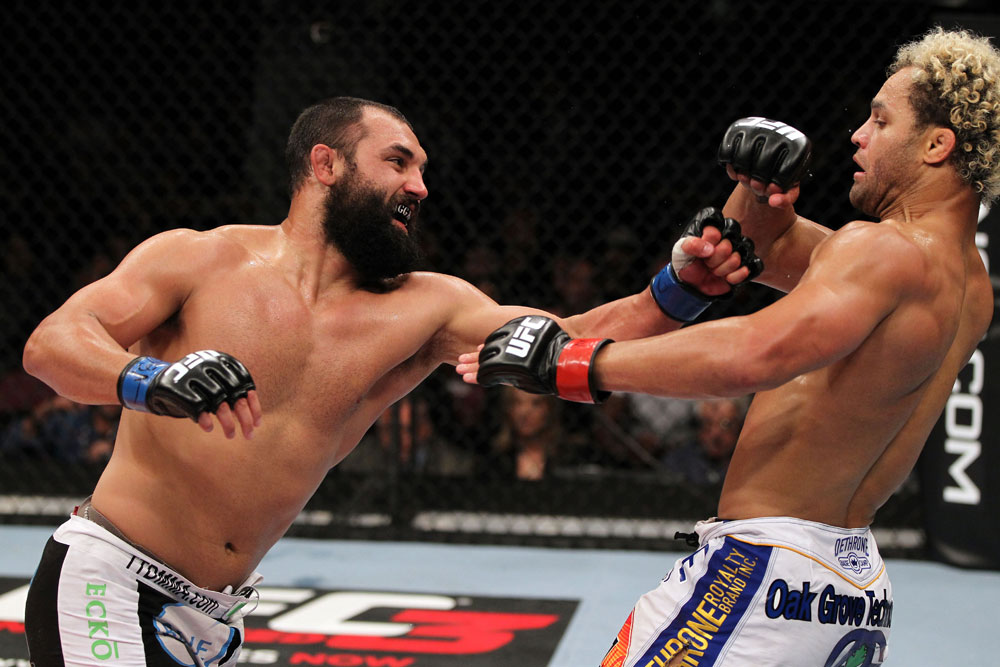 It’s the Cardinal sin of prizefighting. Don’t count your chickens before they hatch, and don’t talk about winning championships until you’ve got the shot in your hand. Not surprisingly, Johny Hendricks has little use for such outdated notions.

“If you don’t set that goal and don’t shoot for that goal every day, you might let it slip through your fingers if you have the opportunity,” said the welterweight contender. “And I just know that every day that’s what I want to be and that’s what I’m striving to do, so I know that it’s never gonna affect me. I’m one fight away from maybe getting to put that belt around my waist. I’ve been dreaming about this for the last five years, and all of a sudden it’s here. And all I’ve got to do is get past one more person and I get a shot at it, and I’m so grateful for that.”

You could blame John Smith for Hendricks’ attitude heading into his UFC 154 co-main event with Martin Kampmann this Saturday in Montreal. As soon as Hendricks walked into the practice room at Oklahoma State University, the legendary Coach Smith had just one question for the Ada, Oklahoma native and his teammates:

“This is from the get go,” recalled Hendricks. “‘What do you want to be?’ Do you want to be a national champion?’ And what I realized that the more you think about it the more you’re gonna push yourself, the more you’re going to go out of your way to go ‘am I training hard enough?’ That’s really when it took. I had dreamed about it forever, and finally it came to where I’m in the room to have the opportunity, and I was like ‘you know what, I can think about that and it gives me a goal to achieve.’”

Hendricks, a four-time All-American at OSU, reached his goal twice, collecting National championships in 2005 and 2006 and falling one win short of a third in 2007. So as he chases gold in mixed martial arts, he already knows what it takes and what it feels like to earn the title of ‘champion.’

“It feels great, but what I did is that I told myself that I wouldn’t let myself dwell on it at all,” he said. “I think that’s why some people are able to hold the belt – it’s because they don’t let it get to their head. You see some guys, and they hear champion next to their name and it sounds so good that they’ve reached their goal, and what do they do then? I’ve already got it set up to where if I win the belt, I’m gonna defend it. And then after I defend it, I want to defend it for another two years and then reassess what I want to do in life. I sort of already have my life planned out from when I first started this. I know that it’s great to have goals and try to achieve them.”

Mrs. Hendricks must love it that her husband is so organized.

“No,” he laughs. “Outside of the house I’m organized. Inside, it’s all my wife.”

But what of the idea that looking toward the future – and putting it on the record, no less - is either bad luck or just a bad choice? Hendricks knows the real story.

“People who say that they don’t think about that, they’re only kidding themselves,” he said. “I know what I want to do and I know what I have to do to reach that goal, and I also think it helps me because every week I’m like ‘am I one step closer to getting to where I want to be? Am I getting better?’ So I can do a chain reaction type thing where some people might not think of it that way and they might not be preparing like it’s a title fight.”

Saturday’s showdown is a close as you’re going to get to a title fight before the title fight between Georges St-Pierre and Carlos Condit takes center stage at UFC 154. And in Kampmann, Hendricks doesn’t just get to throw hands with a top 170-pound contender like himself, but also a friend and former training partner. That’s something new for the “Bigg Rigg” in MMA, but not in his athletic life.

“This is the first time that’s happened, but I’m excited about it, I really am,” said the 29-year-old. “It brings me back to my wrestling days, knowing that I’ve trained with this guy, he’s one of my good friends out in Vegas, and that’s what I did every day in wrestling – I wrestled my friends. And still today, I fight my friends every day, so I tell people, if somebody can beat you, who can beat you? The guy who’s trained with you and knows who you are. That makes me train that much harder knowing that this guy knows a little bit about me, he knows how I can train, and he could beat me. So how do you overcome that? You start attacking it. That’s what really makes me excited about this fight.”

Again, Hendricks throws conventional wisdom (if it’s even wisdom at all) out the window by actually getting excited about facing someone who may know his tricks and who has the talent and determination to beat him. You would think that would be a situation to dread, not savor.

“I don’t really know how to explain it, but it is weird,” he admits. “But all the negative things, you can make them a positive if you want to. I like to live my life positively, smile every day, have fun and enjoy what I do. So even though it might be a tough fight, I’m still happy about it and I think that’s gonna make it that much more fun for the fans.”

Given Hendricks’ fight ending power and top-notch wrestling, and Kampmann’s precision striking, submission game, and never say die attitude, this has all the makings of a fight to remember. But for Hendricks to remember it fondly, he may have to be careful if he gets Kampmann hurt, because that’s when the Denmark native is most dangerous. So how does he keep cool if he has his foe on the ropes?

“There is a way – never let up,” he explains. “That’s something you see in wrestling time and time again. You might get put to your back or you might get pinned when you’re killing a guy. It’s not even a close match and if you relax for one second, the guy throws you to your back and ends up pinning you. So that’s how you beat it – from the very first second to the last second, you fight, you don’t give up anything, and you don’t relax. And I think that’s where he’s been able to capitalize. If you have a mental lapse, that’s when Kampmann can strike at you.”

And this is something that’s exciting? Facing a former training partner who knows your tricks, doing it with a title shot on the line, and knowing that a split second loss of concentration could be the end of your night?

“Preparing for those fights are more fun to me than just a regular fight because you know from the very get go that it’s gonna be a very mental and physical fight to win,” he said, and you believe him because if you’ve watched him in the Octagon on fight night, there doesn’t seem to be anyone happier in the entire building. Expect more of that on Saturday from a fighter who tells it like he sees it, boiling things down to the bare essentials in the process.