"There’s a fine line between confidence and cockiness, and I like to say that I’m confident because if you’re not, you’re in the wrong sport." - Johny Hendricks 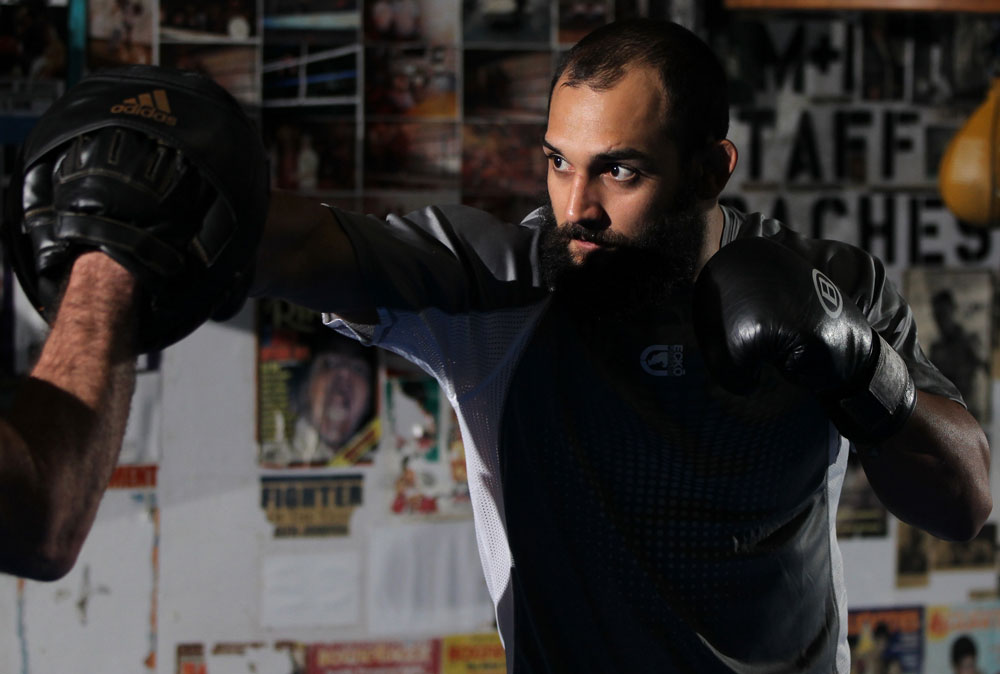 On Saturday night in East Rutherford, New Jersey, Oklahoma State alumnus Johny Hendricks will face off with Edinboro University’s Josh Koscheck in the UFC’s first ever meeting of former Division I National wrestling champions. That alone makes it a historic meeting, but neither fighter is too interested in that aspect of the fight. What matters more is getting the win and moving a step closer to a welterweight title shot.

And though this is a mixed martial arts fight, the attitude shared by both men is one that was born in the wrestling room, a feeling that once you win, there is no time for rest, because when you rest, someone is right behind you waiting to take your place. Hendricks learned that fact as soon as he stepped into the room at OSU. Eventually, his time as a Cowboy would garner him national titles in 2005 and 2006, but before that happened, he had to realize that this wasn’t high school anymore.

“When you go into a Division I school, everybody’s great, and that’s one thing nobody ever told me,” said Hendricks. “When I was in high school, I could beat anybody in my high school, wrestling wise, and I beat everybody. But nobody tells you when you get to college that everybody did that. You’re just another number that’s trying to make his name. And everybody else wants it just as bad as you.”

At that point, there are two options – excel or get thrown to the side. Hendricks chose to excel, and he took a similar attitude into the sport of MMA in 2007. And though the days were long back when he began training in Las Vegas, the only thing he knew is that the payoff would be great if he kept his nose to the grindstone.

“People don’t understand that whenever I was at Xtreme Couture, I woke up at 9, 10 was the first session, and I would train from 10 to 1,” he said. “Then some amateurs would come in from 1 to 2 and I would spar with them every other day. Then from 6 to 9 I’d work out again. That was my day every day because I knew that once everything started getting to go, I was gonna be sort of on the faster track. I didn’t think I’d be in the UFC in five fights, but that’s when I knew I only had a certain amount of time to do this, and I had to make the most of it that I could. Every moment I could, I spent in the gym.”

Hendricks blasted out of the gate, going 3-0 before adding two more victories to his ledger as a member of the WEC roster. By 2009, he was debuting in the UFC with a 29 second TKO of Amir Sadollah, and there was no turning back now. In fact, as he compiled wins over Ricardo Funch, TJ Grant, and Charlie Brenneman, things were almost going too fast for the Ada, Oklahoma native, and just before a split decision loss to Rick Story in December of 2010, his first and only pro MMA loss, it was time for a change. For him, that meant moving back with his family in Dallas, Texas, just four hours away from his old stomping grounds on the OSU campus. And though he resisted at first, he soon realized that he needed to go back to where his greatest triumphs were born in order to get his fire back.

“You always got to go back because it’s easy to fall into a routine, and that’s something that happened to me,” said Hendricks. “And when I moved back to Texas, I was able to go back to Oklahoma State more and I didn’t at first. But once I got that loss, I started going back to Oklahoma State and I got that (fire) back. It’s hard to mimic these 20-year olds looking at you and licking their chops because they know you’re 27, 28 years old, and they’re going through wrestling season and all you’re doing is fighting for a living. Fighting’s easy compared to wrestling, and whenever I got back in there, you gotta get that toughness back, that want, and it’s very easy to lose. You think you still have it, but it slowly slips away until you get put back in that kind of situation. And then all of a sudden, man, it hits you, and you get fired up and the next thing you know, you get that anger and desire back that you lost. It’s pretty nice to have Oklahoma State only four hours away.”

Nice for him and bad for his opponents. Since the loss to Story, Hendricks has sandwiched a gritty split decision win over Mike Pierce with two Knockout of the Night wins, one in 95 seconds over TJ Waldburger in March of 2011, and one in 12 seconds over longtime contender Jon Fitch last December. The power of the “Bigg Rigg” makes you wonder if he even worries about his wrestling anymore. But it’s always on his mind, just like landing one on an opponent’s chin is.

“The reason why I’ve been doing so good on standup is that I try to figure out my opponent,” he said. “Does he think I’m gonna hit him? If he does, then I need to do that. If he thinks I’m gonna go out there and hit him and try to take him down, he might be waiting for that. So you’ve got to feel out your opponent, and sometimes, it hasn’t gone long enough to get that. The Lord has blessed me with some power, and one thing that I have noticed is that I don’t try to knock anybody out. I really don’t. All I’m trying to do is throw fast and about 80 percent. That’s all I need to throw. I’m just trying to get it there as fast as I can. That’s it. Because the faster my hands go, the quicker I can see what I need to do. For some reason, time slows down and me and my opponent slow down when I’m in the Octagon, and whenever I do something, I can sorta see what’s coming.”

That’s an enviable vision to have, and entering the biggest fight of his career to date, one televised nationally on FOX, the 28-year old is confident that not only will the Koscheck bout be a good one for the fans, but one that will be good for Johny Hendricks.

“I believe so,” he said. “You’ve always gotta believe in yourself. No matter what fight comes your way, you can win. There’s always a chance and always something that can push you to where you can get your hand raised at the end of the day. If you go in without that attitude, you’re already beat before you get in the Octagon and that’s a bad mental frame to have. There’s a fine line between confidence and cockiness, and I like to say that I’m confident because if you’re not, you’re in the wrong sport.”