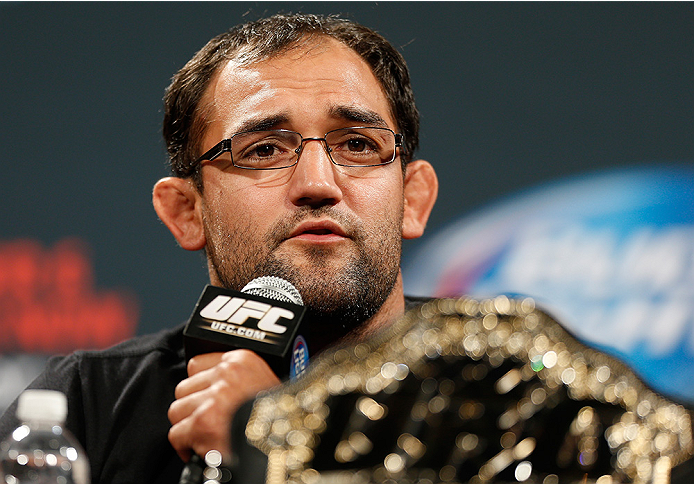 It should have been the greatest moment of Johny Hendricks’ life, and in a lot of ways it was, but as the UFC welterweight champion approaches his December 6 rematch with Robbie Lawler at UFC 181 in Las Vegas, looking back at his title winning effort in March produces what he calls some “bad memories and good memories.”

The good? Winning the title in the frontrunner for 2014 Fight of the Year and placing the championship belt around his waist that he (and many others) thought should have been his last November when he lost a controversial split decision to Georges St-Pierre.

The bad? Missing weight in his first attempt before making it on the second try, and emerging from the fight with a torn bicep and fractured leg.

Hendricks has left it all in the past though, choosing to instead focus on what he can do to avoid any issues the second time around with Lawler, and he admits that he’s doing things a bit different this time. Nutritionist Mike Dolce is still on board Team Hendricks, but when the Dolce Diet guru isn’t around, Hendricks is measuring his body fat and muscle mass and staying ahead of the game so that there are no surprises on fight week or weigh-in day.

It’s a science that could suck the joy out of the actual fighting part of the sport, but Hendricks takes it all in stride, realizing that without the hard work, there’s no payoff at the end.

“I look at it as part of my training – it’s part of my job,” he said. “This is the toughest part of my job, to make weight. Training’s not so bad. For some reason I’ve always liked training, and I like fighting. I like getting in the Octagon that night, but the one thing that’s the toughest I have to deal with is making the weight. So how can I make that easier on myself, and that’s when we brought in Dolce. And now I’m getting older and getting stronger, so I want to see where I can make that even easier, and that’s where I’m at now.

“I’m getting wiser in my old age,” he laughs.

He may also be getting better. Winner of seven of his last eight, the 31-year-old Hendricks has already fought the best of the best at 170 pounds, and he’s not about to stop now. Of course, Lawler will have something to say about “Bigg Rigg” keeping his hot streak going, and this will be a unique situation for the Oklahoma native, as this is his first MMA rematch. Then again, it’s nothing he hasn’t seen as a two-time NCAA wrestling champion for Oklahoma State.

“It’s pretty easy,” Hendricks said of dealing with rematches. “You sit there and you go, okay, I know he knows I can do this and I can do that, so how do you hide it a little bit better? That’s what helped me to stay where I was at – I was always adapting. I was staying with the same thing, but making it better. For example, I always hit a single leg, but what I learned was how to hide it. And once I learned that, then it became easier to move forward and to face these guys. Because even though they know it’s coming, they don’t know when because this is what I’m doing to prevent them from knowing that. That’s sort of what this fight is going to be for me. Okay, Robbie knows I can do this, he knows I can do that. I know what he can do. So how am I going to overcome that?”

What may be more difficult for Hendricks is getting emotionally fired up after two very emotional outings against St-Pierre and Lawler. But guess what, he’s not concerned about that either, as he gives another nod to his education under legendary OSU wrestling coach John Smith.

“When I was wrestling in college, after I won the National title my sophomore year, I wrestled a guy that I don’t even think was ranked,” Hendricks recalls. “And he came out so strong and ready to wrestle. In my head, I was like ‘why?’ And Coach Smith drilled into your head ‘hey, you’re gonna get the best of the best out of everybody.’ So for me, it (the Lawler fight) is just another match. My title’s on the line, that’s the only difference. Every fight now is my NCAA tournament final.”