Johnson's Loving Florida for More than just the Weather

“Every time I step into the cage, I'm there to fight for the full 15 minutes with everything I can because I'm in this sport to be the champ...” - Michael Johnson 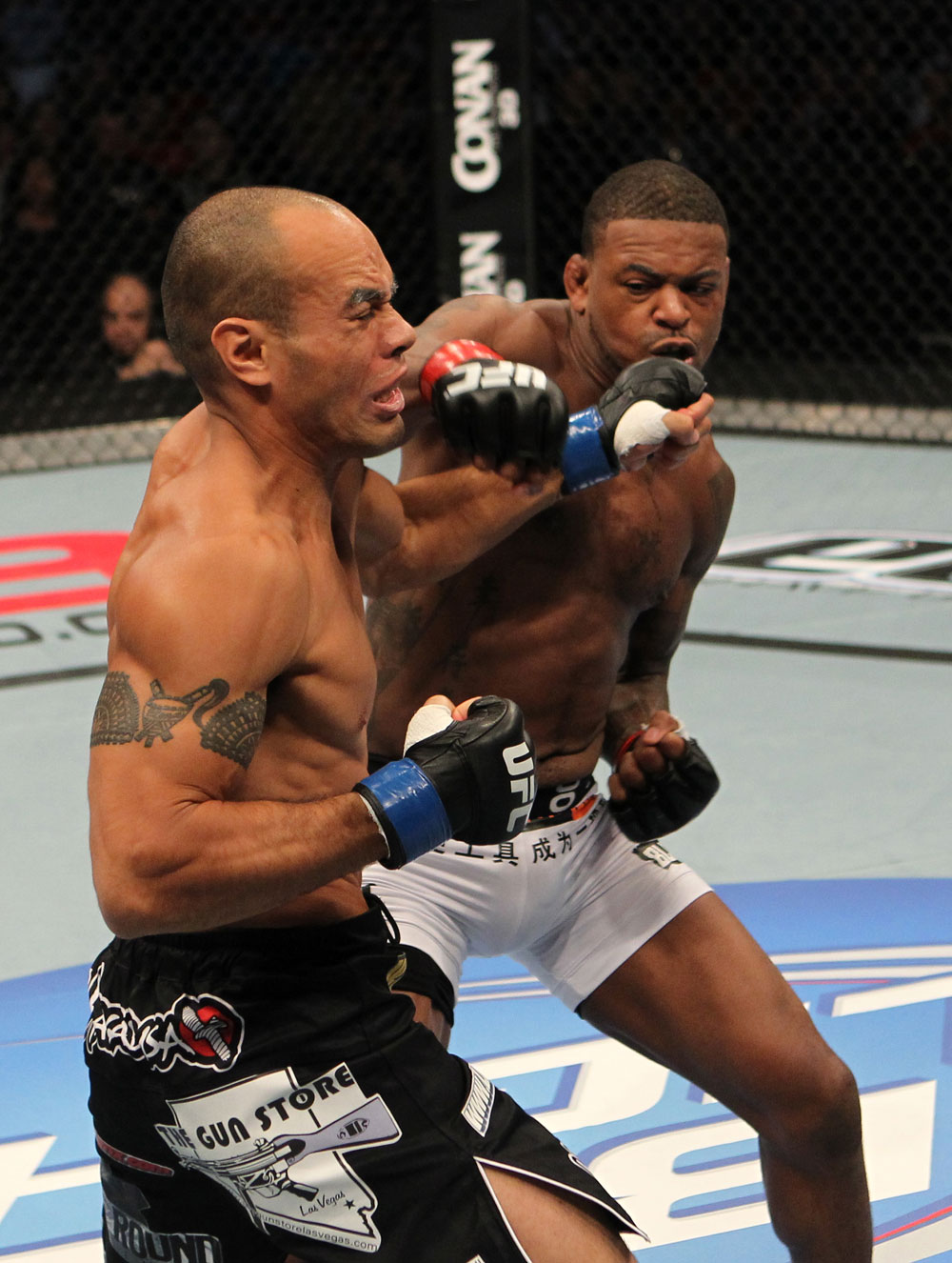 The anecdotal first rule in real estate is “location, location, location”. The same can be said for being a professional UFC fighter because where one lives, what gym one goes to, and who one trains with has as great an effect on what happens in the Octagon as anything else. For The Ultimate Fighter season 12 finalist Michael Johnson, a change in camp showed immediate and marked improvement in his game, which helped earn “The Menace” his first victory in the UFC. As Johnson continues with this new camp, the lightweight division should expect a fast evolution for the wrestler with the dynamite hands.

Johnson’s new home is an upstart gym with more than a couple recognizable names to the UFC faithful. “I am down at the Blackzilian camp in Florida with Rashad Evans, Anthony Johnson, Gesias ‘JZ’ Cavalcante, and the Villefort brothers,” states Johnson. The actual gym, which houses the Blackzilians is Imperial Athletics in Boca Raton, Florida. Evans began putting the team together after his storied departure from Jackson’s MMA and Grudge Training Center, and culled the rest of the talent through a familiar entity: their management.

“We all have the same managers at Authentic Sports Management,” explains Johnson. “It was just kind of one of those things that ended up happening. I came down to help JZ get ready for a fight and I just fell in love with it down here and the situation they had. I decided to stay and give it a shot.”

The 25-year old relocated from Missouri to South Florida earlier this year ahead of his bout with Edward Faaloloto at UFC Live in June. “Everything felt good for that fight and I came in a little bit more prepared and did what I had to do,” says Johnson, who was making his first appearance in the Octagon post-TUF and post his finale decision loss to Jonathan Brookins last December. “I felt really good going into that fight. With the layoff, I had plenty of time to work on the mistakes in my game that I made in the finale fight. I felt like I was in the best shape of my life after having a really long training camp and having some great coaches.”

One coach’s work with Johnson was especially apparent in the bout with Faaloloto; that of Diogenes Assahida. The fight didn’t make it past the first round, as “The Menace” finished Faaloloto by TKO, but the fans got an eyeful prior to that with Johnson’s noticeably different Muay Thai standup. Assahida’s most famous student is none other than UFC middleweight champion Anderson Silva. The similarities were obvious to even casual fans: continuously switching stances, fluid powerful punches right down the center, a tight clinch with knees, and a stoppage. More than anything, it showed Johnson is ready to learn and can soak up knowledge like a sponge.

“For the Eddie fight, I was working with a great striking coach, Diogenes Assahida, and he showed me some real good skills,” said Johnson. “Now, I have a new striking coach from Holland named Henri Hooht. I love his style, the Dutch style of kickboxing. I'm evolving everyday with my standup. I'm tightening up my standup and I'm punching with a lot more power and speed. It's always good to have that wrestling background, but I want to go in there and decide fights on my feet. I love to stand and give the crowd a show to look at. That's what everyone wants to see and that's what I'm fitting to put on.”

On October 1st at UFC Live, Johnson’s next challenger will be the undefeated English prospect, Paul “Sassangle” Sass. At first glance, the moniker may appear odd, but one look at the 23-year old’s record explains everything. In short, Sass is good at triangle chokes - really good. Out of Sass’ 11 wins, 10 are by submission and eight of those are triangles, including UFC 120’s “Submission of the Night”, which “Sassangle” tapped Canadian Mark Holst with at the end of the first round. Johnson has lost by the dreaded triangle choke before the UFC, but he believes he’s learned from those mistakes and is a whole new breed of fighter now.

“I think it makes it easier for me because I only have one thing to worry about,” asserts Johnson. “I was beat by triangles earlier in my career when I was just getting started in pro fights a couple years ago. I made those changes where I would never get choked like that again. I would be winning the fight and then I'd end up getting triangle choked. I dedicated myself in the gym to really work on that. It's a huge difference now. If he caught me a couple years ago, when I was easily getting caught in triangles because I wasn't defending them the right way, then I could see this going his way. But I don't really see that happening in this fight.”

At 10-5, Johnson has displayed heavy hands in his standup, but his original background is in wrestling, so if Sass gets the fight to the floor, he’s ready. “I definitely think my wrestling overpowers his jiu-jitsu,” affirms Johnson, who confidently believes he can best Sass in his area of expertise if the fight ends up there, and if it doesn’t, then Sass is in a world of trouble. “Regardless, if the fight goes to the ground and he's on his back and he's trying to throw submissions and he can't submit me, then he's losing. If he is standing on his feet with me then he's going to be losing in that aspect as well. I see he his strengths, but I think they are easily beatable if I stick to my gameplan.”

In the nation’s capital, Washington D.C., Johnson will look to put his hands on the submission specialist, Sass, live on Versus. “Every time I step into the cage, I'm there to fight for the full 15 minutes with everything I can because I'm in this sport to be the champ and my goal is definitely trying to accomplish that in the next few years.”

He’s certainly with the right camp, the right coaches, and the right teammates, as he’s got the Blackzilians to help him one day achieve that goal. “I feel extremely blessed to learn from this group of guys and it motivates me every day to go in there and work with those guys. They show me the level that I need to be at to accomplish my goals in the UFC. And come the fight, I will go in there and put everything on the line and put on a show for the fans and they will not be disappointed.”