Johnson Respectful, but Ready to 'Rumble' 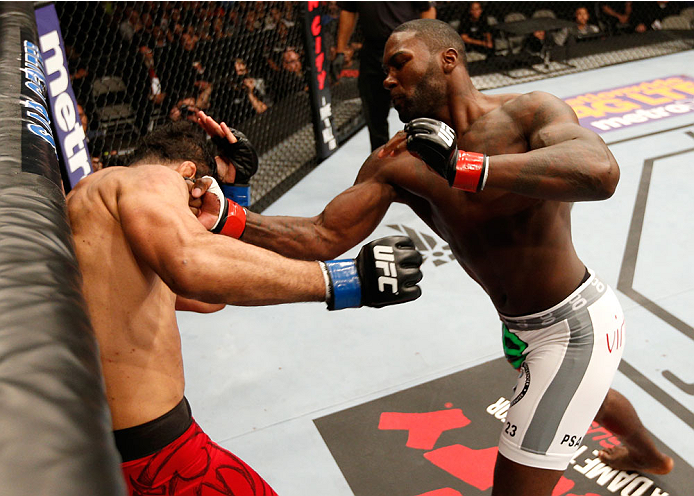 When Anthony Johnson faces Alexander Gustafsson this weekend in Stockholm, Sweden, he will have come full circle in a career that has seen many ups and downs.

“I’m looking forward to it,” Johnson says. “I made my own path in this sport. Some of my decisions were good, some were bad, but recently they’ve been good. A year ago I never would have thought I would be in a title eliminator bout for the UFC light heavyweight championship, but here I am, and I am damn well not going to take it for granted.”

Johnson spent some time in Sweden to acclimate his body to the stark temperature difference from his South Florida home, where he trains with the Blackzilians.

“It’s damn cold out here,” he says. “But it’s not like Rocky, where he goes to Siberia to train for Drago. There aren’t any sled dogs or snow drifts here, but there’s plenty of ice.”

Ice is just how one could describe the 2015 version of Anthony “Rumble” Johnson. He’s cool, calm and collected as he approaches perhaps the biggest fight of his career. These days Johnson is a grown man, free of all the doubts and insecurities that caused some of the bad decisions that plagued him earlier in his career.

“I’m in a good place now, but let me tell you something, my coaches, my training partners and my manager, they deserve this win even more than I do. When you’re pushed by people who believe in you more than you believe in yourself, then that should tell you to put your head down and get to work. As soon as this fight with Gus was announced it’s been work, work, work.”

Johnson says Alexander Gustafsson has been underrated for far too long, and he has the utmost respect for him.

“Look man, this guy is underrated. He flies under the radar,” Johnson says. “Even after taking Jon Jones into deep water, people still don’t have the kind of respect for him that he deserves. He’s got top quality trainers, top quality fighting partners, and he’s a top athlete for a reason. Now, do I think I’m going to win, yeah, I do. But do I think it will be easy? Hell no.”

If Johnson does get the W over Gustafsson, he’s looking forward to his chance at the light heavyweight belt held by Jones.

“I think I stack up with Jones well. He’s a good athlete and he’s obviously champ for a reason because of all the tools that he has, but I would do fine against him. No one is going to catch me with a standing elbow, I can tell you that. You have to be pretty flat-footed to be hit with one of those. And if he does get me with one, you better believe I am already rocked. No, there won’t be any tricks against me. As far as Gus is concerned, I’m not worried about his height or reach. I brought in my boy from Holland, Colin George, a six-foot-eight kickboxer who has amazing stand-up. I am very confident coming into this fight.”

A five-round headliner is something that Johnson hasn’t seen too much of in his career, but if it comes down to those “championship rounds,” he says it won’t be a problem.

“If I were to predict when I’m going to win this fight, I would say the third round,” he says. “I don’t really care how I win, I just want to win. But if it goes to rounds four or five, I’ve got plenty of gas in the tank.”