Johnson Putting the Finishing Touches on the Year of The Menace

“This card is stacked with huge superstars in this sport. I’ve been
watching these guys since I started and before I started, and that’s
another bonus." - Michael Johnson 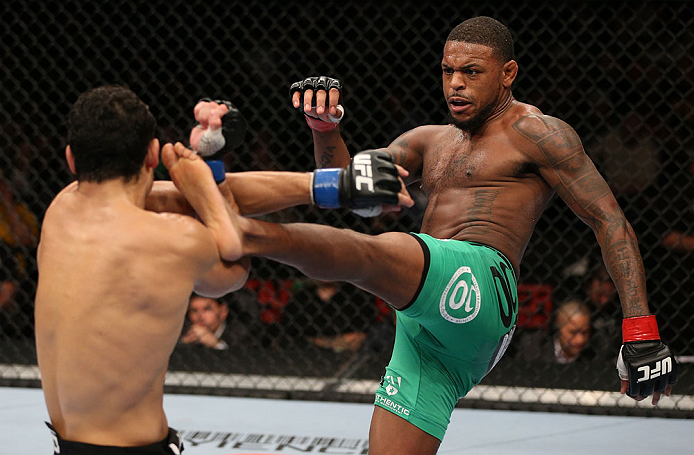 Just as anyone hoping to best Goro and Shang Tsung would first have to fight their way through the likes of Sub Zero and Johnny Cage, making the climb to the top of the most talent-rich division in the Ultimate Fighting Championship is a treacherous journey with a new dangerous opponent awaiting your arrival inside the cage.

Johnson’s goal at the start of the year was not to complete the game. Instead, he wanted to put himself in a position where only a few opponents stood between him and ultimate victory. Rather than setting an unreachable goal of being champion, Johnson set his sights on ending the year as a top-10 lightweight, and making 2012 “The Year of The Menace.”

In January, he slid a quarter into the machine. Three wins and 11 months later, Johnson is still playing on that original quarter, and he’s a win away from doing what he set out to do at the start of the year.

“Everything is going good, like everyone can see,” Johnson said confidently. “It means a lot to have some goals set and being on my way to accomplishing them. I’ve had three tough fights, and three big wins, so everything is working good. Everything is lined up in order, and if I don’t get into the top 10, I’m going to be pretty damn close, and I’m definitely going to be ready for next year.”

The 26-year-old lightweight hasn’t coasted through the year unscathed, piling up a string of “Flawless Victories” as he prepares to take on unbeaten prospect Myles Jury at UFC 155 later this month. Johnson has taken a few lumps, and survived a couple tense moments on the way to earning three consecutive wins this year.

In his first bout of the year against Shane Roller, Johnson spent the majority of the third round defending a choke with the three-time All-American wrestler on his back, hooks in, looking to finish. He endured, and earned a unanimous decision, advancing to the next stage of his personal lightweight tournament.

Johnson surprised many by besting former Ultimate Fighter winner Tony Ferguson on short notice in May. “El Cucuy” had beaten a pair of veterans after beating Ramsey Nijem to close out Season 13 of the long-running reality TV competition, but that night, it was “The Menace” who had showed the better footwork and hand speed, earning a clean sweep of the scorecards to take another step up the lightweight ladder.

Two months ago, Johnson’s climb through the division was nearly brought to an abrupt halt.

Heavy-handed Team Alpha Male member Danny Castillo dropped Johnson early in the first round of their October encounter, and looked poised to put away the confident and charismatic member of the South Florida-based fight team known as “The Blackzilians.” But just as he did against Roller, Johnson pushed through the rough patch, and survived the round.

A minute and change into the second, the fight was over, and “The Menace” was taking another step forward in his journey towards contention.

“I wouldn’t go so far as saying I have to put another quarter in the machine,” Johnson laughed, reflecting on his first-round struggles against Castillo. “It’s more like I lost that first matchup, but it’s the best of three for fighting games. I lost that first matchup, and then I came back, and he wasn’t able to continue to a best of three. That’s how I’m looking at that one.

“Overcoming those adversity points – the Shane Roller fight where he was on my back for the whole third round, and me having to defend, and then having a pretty intense first round where I had to get out of some things with Danny – it definitely makes it more enjoyable to come out of those positions and come out on top in those fights. It’s made it extremely satisfying.

“Like I’ve always said – first round knockouts are great, but I’m not the type of guy that wants to just go in there and finish fights quickly. I want to fight for a while, and let people actually see the growth and improvement that is coming along with me as a fighter.”

Looking back over his first six UFC appearances, Johnson’s development is obvious. While the athleticism that made him Georges St-Pierre’s first pick and the early favorite on Season 13 of The Ultimate Fighter remains, his footwork, conditioning, and overall striking skills are all vastly improved. His three wins this year have already delivered Johnson to where he wanted to be when “The Year of The Menace” began against Roller, but that isn’t causing him to press pause on his journey.

“They offered me a fight, and I wanted to get four in before the end of the year, so I wasn’t going to turn it down,” Johnson said of his decision to face-off with the undefeated, but relatively unknown Jury next weekend in Las Vegas. “Myles is a good guy; he’s very well rounded, and undefeated. Me beating him might not boost me up in the rankings as much as I want, but that’s okay. I don’t turn fights down. If they offer me a fight, I’m going to take it regardless of whether it’s the best thing for me moving up in the rankings or not.

“I’m just going to go in there and fight because I’m honored to be on a card like this. A New Year’s Eve card in Vegas is huge, and it’s my first pay-per-view, so I definitely wasn’t going to pass that up.”

The bout with Jury allows Johnson to cross “fight on a pay-per-view event” off his personal Bucket List, but the surging lightweight is competing on the preliminary portion of the card. Rather than stew on what some would perceive as a snub, Johnson is proud to be fighting on one of the biggest events of the year alongside some of the organization’s premier athletes, and intends to maximize his airtime by putting on a show against “The Fury” on December 29th.

“This card is stacked with huge superstars in this sport. I’ve been watching these guys since I started and before I started, and that’s another bonus. It’s a privilege to fight with these guys. I’m not on the main card, but I’m going to make sure that my fight gets shown twice; I definitely want to make the pay-per-view as one of the extra fights. It’s added motivation to go in there and prove to the UFC and our fans that I’m serious and really looking to make a run for this title (in 2013).

“I feel like I deserve to be on a main card,” admitted Johnson. “That’s a huge chip I have on my shoulder, and I’m going to keep fighting to get my fight televised twice. If that’s the case, I’ll stay on the undercard if they’re going to show my fight twice because that means it’s getting seen that much more than the others. It’s just going to have to play out until they have to put me on the main card.”

A win over Jury completes the task Johnson set out to accomplish at the start of the year. With a number of pivotal lightweight matchups already scheduled – and a few recognizable names relocating to the featherweight ranks – earning a fourth consecutive victory to close out the year should put Johnson in a position to share the cage with the best the division has to offer in early 2013.

It’s a scenario Johnson has admittedly already started thinking about, and one that he’s unsure how to tackle.

“I want to fight as much as possible, but I also understand that gym time is way more important that fight time. I feel that’s where you’ve got to go learn, but if I can get four fights again next year, that’d be great. I’m just going to stay grounded, continue to work on my weaknesses, fight every guy they offer me, and see how that goes.

“Next year has to be bigger than this year,” continued Johnson. “I’m going to get bigger name opponents, and tougher opponents. Not saying that these other guys weren’t tough – I think every guy in the lightweight division is tough, and has the potential to beat anybody. That being said, whoever they give me, whatever kind of year the UFC wants me to have, that’s the kind of year I’m going to have. As many fights as they offer me, I would never say no to a fight. We’ll see what 2013 has for me, but first I have to get through Myles.”

Just as every interview we have done this year has revolved around Mortal Kombat and carried the title “The Year of The Menace,” each one has also come with the same predicted outcome, and neither one of us are ready to break from the pattern and potentially jinx things now.

“It never changes,” Johnson laughed when prompted for a breakdown on how his fight with Jury would play out. “It’s never going to change no matter who I’m fighting – I’m always going to go in here and try to get a knockout. In my mind, I think I can knock out anybody and everybody I fight; that’s always going to be the same. If you ask me this question and hear me say, `I’m going to take him down and submit him,’ we can start wondering what’s happening.

“I’ve been working extremely hard in this training camp, and I just want to go in there and fight – put on an extremely entertaining fight for the fans, and go in there and get another bonus check. I’m just going to fight hard and look for the knockout.

“Whether it comes early or it comes late, at any time in this fight if I hurt Myles, I’m not letting him off the hook – I’m going to get him out of there.”