"In order to get to the top I am going to have to go through the
toughest guys to get there. Melvin is definitely one of those guys." - Michael Johnson 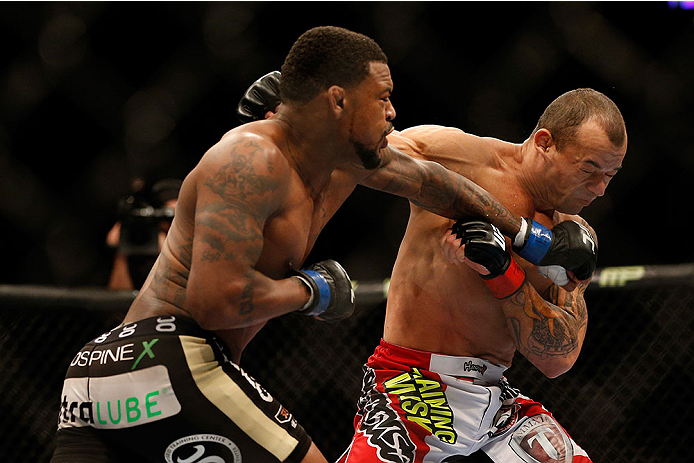 When the time comes to step into the Octagon and go to work on the big stage, the most a fighter can hope for is victory and a message that is sent in the process. Surging lightweight Michael Johnson has been doing plenty of both of as late, putting himself in position to breakthrough to the next tier of the 155-pound fold because of it.

The 27-year-old TUF alum has turned in back-to-back career-defining performances as he’s dominated established veterans in impressive fashion. The St. Louis native put the brakes on a two-fight skid when he carved up hard-nosed scrapper Joe Lauzon in hostile territory when the UFC returned to Boston last August. While defeating Lauzon helped to reclaim some of the momentum he had built off a strong campaign in 2012, Johnson’s next outing kicked things into an entirely different gear.

The Team Blackzilians fighter stepped in against Brazilian powerhouse Gleison Tibau at UFC 168 last December in a fight that carried heavy implications for both men. The lightweight division is as competitive as it’s ever been, and both were looking to take a step into deeper waters. With Tibau’s 21 fights under the UFC banner, the American Top Team product was figured to be the right challenge at the right time to determine whether or not the rising prospect was ready to jump to the next level.

If the muscle-heavy Tibau was a test, it was one “The Menace” passed with flying colors. By those terms, he not only passed the exam, but walked up, slammed his paper on the teacher’s desk before exiting his classroom and making his way to the cafeteria for a chilled carton of milk.

“It felt great to get the win,” Johnson said. “It was the result of a lot of hard work over a long period of time with all my coaches and teammates. It was such a big weight that came off my shoulders because I knew it was going to be an incredibly tough fight to go in there against someone like Tibau. It was such an incredible feeling to go in there and finish him, especially the way I did it. Then to be able to sit and think about it after the fight and realize he hadn’t been knocked out in seven years, it felt great to be able to do that.

“Changing my focus has been a big thing for me,” he added. “I got on that winning streak back in 2012 and I started to get in over my head. I started to think I was untouchable and it made me lose focus on what I should have been locked in on. My mind was in other places going into those fights and I didn’t really take my opponents seriously. That has all changed and I’m going in there 110% focused on what I need to do. I’m extremely dedicated right now and I’m not taking anything for granted. I’m going out there to prove points, make statements and show I’m all business out there.”

The general consensus around the MMA world pointed to the bout being a competitive affair that could go either way, but few foresaw Johnson doing what hasn’t been done since 2006 as he knocked Tibau out on in the second round of the tilt. While the manner in which he earned the stoppage was certainly noteworthy, Johnson’s entire performance against the savvy veteran was an example of the young fighter’s rapidly expanding skill set.

“Everything is coming together perfectly for me,” Johnson said. “I went back to the basics where it is hard work all the time and no screwing around. Everything is clicking and my coaches and I are all on the same page. The environment I train in couldn’t be better and our team is doing great. It has allowed me to build some great momentum and I carry that with me into the cage. Just knowing how much support I have and all my teammates that have my back, it allows me to go into these fights care-free and to get in there and have fun.”

When Johnson came to the UFC in 2010, he relied heavily on his wrestling pedigree and athleticism to get the job done inside the Octagon. In his 10 fights since coming off The Ultimate Fighter, Johnson has shown consistent improvement - especially in the striking department, where his work with Henri Hooft has paid huge dividends. Where the Florida transplant once lived or died on the strength of his grappling, wrestling is now just one of the weapons Johnson can use on fight night.

That development hasn’t come easy, but with Johnson’s Midwestern roots, hard work has never been something he’s shied away from.

Every step of his journey through MMA has prepared him for the bigger challenges waiting up the road, the first of which being lightweight powerhouse Melvin Guillard. The former training partners will square off on Saturday night when the UFC returns to London for Fight Night: Gustafsson vs. Manuwa. “The Young Assassin” has held elite level status in the lightweight fold for the past six years, but several setbacks at crucial junctures have kept him on the fringe and out of the title picture.

The 30-year-old knockout artist is looking to restart his climb back, but Johnson plans to throw a wrench in those works. He believes it is his time to start knocking on the door of a title opportunity, and defeating an opponent with Guillard’s resume is what he’s going to need to get that progress rolling.

“Melvin is a very tough guy,” Johnson said. “We’ve trained together before and I consider him a friend of mine. It’s always a little tough to go out there and fight a friend, but at the same time, it’s just business. He has some holes in his game where I think I can take advantage and capitalize. I think that will give me the advantage in some places. I have to watch out for his power. I have to watch out for his knees and go out there and fight my fight. It’s going to be exciting and I’m really looking forward to this one.

“In order to get to the top I am going to have to go through the toughest guys to get there. Melvin is definitely one of those guys. He’s been around the UFC for a long time. I wouldn’t consider him a gatekeeper, just like I wouldn’t consider Gleison one, but if you want to get to the top 10 or get big fights with top 5 guys, these are the guys you have to get through. They have great wins under their belts and have been close to the title before. You have to beat the really good guys to get to the best guys and that’s what I’m looking to do. Melvin is a guy I have to get through to make that happen and I’m going to lay everything on the line to make sure I get the job done.”