Johnny Walker Out To Remind People Of His Potential

Johnny Walker had all the buzz in the world when he won his first three UFC fights and earned three bonuses. He returns to UFC Vegas 11 to remind everyone of that potential
By E. Spencer Kyte, on Twitter @SpencerKyte • Sep. 18, 2020

Instant success has a way of obscuring reality, and few competitors had as incredible a start to their UFC careers as Johnny Walker.

After earning a contract through one of the all-Brazilian Contender Series events that took place in the summer of 2018, the towering light heavyweight collected three blistering first-round stoppage victories and three Performance of the Night bonuses in five months to begin his time inside the Octagon. In quick succession, the Brazilian newcomer defeated Khalil Rountree Jr., Justin Ledet, and Misha Cirkunov, forcing his way into the Top 10 and prompting many observers to wonder aloud if the charismatic newcomer was poised to become “The Next Big Thing” in the light heavyweight division.

But what those impressive performances and his engaging personality overshadowed was that Walker was a fighting nomad — a competitor who bounced around from different training situations throughout his relatively brief career - and that he needed the training and coaching stability to turn natural talent and raw potential into a truly impressive finished product.

Consecutive losses to Corey Anderson and Nikita Krylov have quieted the buzz a bit, but as he readies to face Ryan Spann this weekend in Las Vegas, the 28-year-old believes he’s primed to remind everyone of his abundant potential.

“I’m not very old in martial arts — I’ve fought for six or seven years as professional — and I still have a lot to learn, but I’ve seen enough to know what is good for me,” said Walker, who carries a 17-5 record into his clash with the streaking Fortis MMA standout on Saturday night. “I haven’t fought for too long, but I have a lot of experience already.

“I have 17 wins and five losses — a lot of fights — and I’ve spent the last six years training all year, every day. I know what I have to improve and I just need a couple years to make those adjustments in order to be at a high level and be a champion, but I have the skills to fight against top contenders.”

In addition to being confident in his skills, Walker is also aware that his itinerant lifestyle when it comes to training is something that has to come to an end if he really wants to build the kind of fighter/coach relationship necessary to take his skills to the next level and make those championship dreams a reality.

Following his loss to Anderson last November at UFC 244, he connected with Firas Zahabi and did his training camp for the bout with Krylov at Montreal’s Tristar Gym, raving about working with the renowned coach and getting insights from the gym’s most famous member, UFC Hall of Famer Georges St-Pierre.

But after facing Krylov in Brasilia, Brazil in mid-March, Walker was locked down in his home country for several months due to the global coronavirus pandemic, which not only limited his training, but also kept him from seeing his girlfriend. When she returned home to Ireland for a vacation, Walker joined her, but was unable to venture back to Montreal once the UFC offered him this bout against Spann.

“The UFC offered me the fight when I was here and I couldn’t fly to Montreal because they weren’t accepting tourists there and I know John and he’s a really good coach,” Walker said from Dublin, where he’s spent the last several weeks readying under the watchful eye of John Kavangah at SBG Ireland’s main facility. “I was here last year and trained at the gym, so I know they have really good guys.

“I messaged him when the UFC offered me the fight and asked if he could help me with my training camp and he said, ‘100 percent, no problem,’ so I’m here and I’m doing great. John is a real professional, a really good coach, and I hope he can make another champion.

“I want to be with one team,” he added. “I think I have to be more consistent, training every day in the same gym, with the same coach because in Montreal, I trained for like six weeks, and that’s not time enough for Firas to fix me up, teach me everything so I can improve myself.

“I think I’m going to take a little bit of time to work with John so he can help me improve myself and we can work together a little longer so I can improve myself further. You cannot fix mistakes and learn everything in one month, two months; you need a couple months to really learn, so that’s my plan for the next few years.”

Knowing that Walker has never settled in and worked with an accomplished coach or elite team for more than one or two training camps really reframes both his initial UFC successes and his more recent setbacks.

It makes you wonder how much better the takedown defense that cost him in his decision loss to Krylov last time out can be after working for a year or more with the same cast of experienced fighters and coaches or what the creative, powerful striking that produced his trio of quick victories over Rountree, Ledet, and Cirkunov could produce once honed and sharpened? 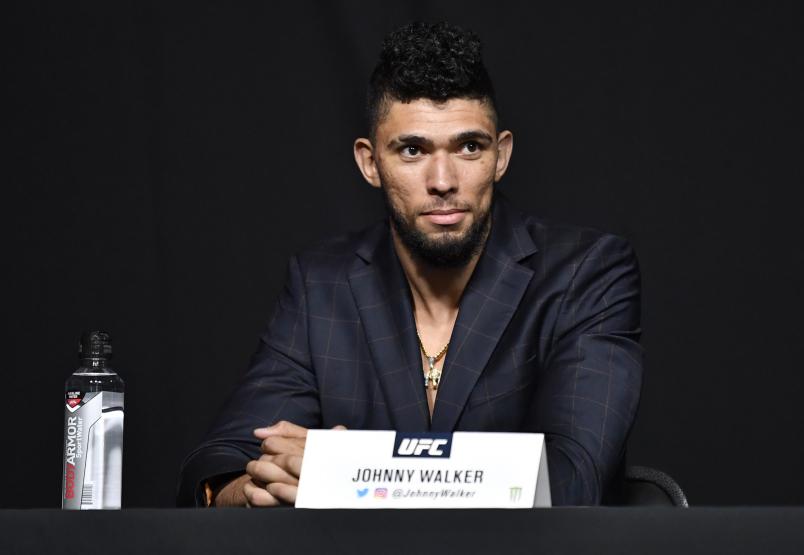 And it’s what makes this matchup with Spann on Saturday night so intriguing.

After getting knocked out quickly in his first Contender Series appearance, the 29-year-old Spann has rattled off eight straight victories: three on the regional circuit, his own quick, contract-winning triumph in his second Contender Series showing, and four straight inside the Octagon, including a first-round knockout win over Antonio Rogerio Nogueira.

A member of the talented Fortis MMA crew headed by Sayif Saud, “Superman” has climbed into the Top 15 and stands out as one of the emerging names capable of potentially making a run towards the top of the suddenly wide open light heavyweight division, as well as being the kind of well-rounded, well-coached competitor Walker needs to beat in order to regain some momentum and give real weight to those positive “What If” questions posed above.

“He’s a top contender — a tough guy, strong, tall, coming in with a lot of wins,” he offered in regard to the man he’ll face on Saturday night at the UFC Apex. “This is a real good opportunity for me to beat a real good guy and prove my value to the UFC. I’m really glad the UFC gave me this opportunity and I’ve trained really hard for this.

“I know I’m not in my prime yet,” he added. “I know I can be better and I’m going to be better, but this is the time to show how much I’ve improved after those two losses. Now is the time to show everybody where I can go. I’m really excited to fight and I can’t wait to get there.”

A blistering start was followed by a disappointing stumble and great deal of soul searching, which has provided Walker with clarity about how he wants to approach his future and where he believes it will lead him in his career.

Saturday night, the towering Brazilian with a mega-watt smile returns to action, hoping to show that the best really is yet to come.