Driven By An Intrinsic Motivation That Differs From The Combat Sports Colleagues Of His Generation, Johnny Muñoz Is Truly One Of A Kind
By Thomas Gerbasi, on Twitter @TGerbasi • Jun. 2, 2022

“I'm way different from everybody in my generation,” he chuckles, the product of a life spent training in martial arts from the age of five.

So when “Kid Kvenbo” earned his first Octagon win last summer, submitting Jamey Simmons in the second round, he didn’t pop a neon UFC hat on his head and go on a victory tour. It was just the next step in a journey he expects to lead him to a bantamweight title in the coming years. 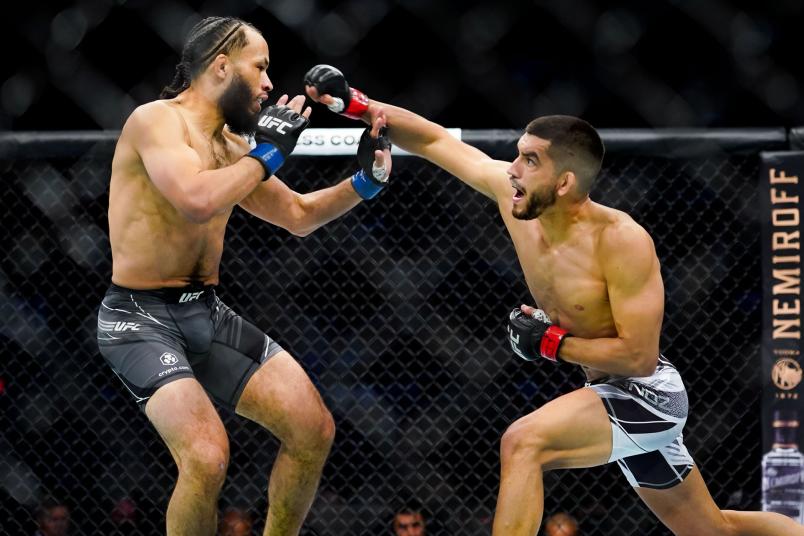 Johnny Munoz swings at Jamey Simmons during their Bantamweight fight at the UFC 265 event at Toyota Center on July 7, 2021 in Houston, Texas. (Photo by Alex Bierens de Haan/Getty Images )

“When I got the win, I felt better about my place in the UFC,” Muñoz said. “The first one (against Nate Maness in August 2020), I didn't get the decision I wanted, so I was like, ‘I'm here, but I gotta win.’ I'm not trying to be like these other guys that get in the UFC, start telling everyone they're finally here and they stop working. They get finished or lose two fights in a row and get cut, but that ain't me. I've been working hard my whole life to be here since five years old training jiu-jitsu. I had a lot of hurdles to get over coming up in jiu-jitsu, injuries, hardships - I've been working my whole life towards this point, sacrificed a lot of things, so this is my time.”

Muñoz returns this Saturday against Tony Gravely, his first start since the Simmons bout and following a trip from his home in Norco, California, to train with the Entram Jiu-Jitsu squad in Tijuana, Mexico. He needed a little convincing from his buddy Brandon Moreno to make the initial 2.5 hour drive to Mexico, but once he got there, he knew the former flyweight champ’s call was the right one.

“They got everything there that you need to train as a fighter - strength and conditioning, striking, jiu-jitsu, everything,” said Muñoz. “You go there and just train hard and go hard. Sparring's hard, and there's nothing fancy about it. There's no 'look at me' or none of that bulls**t. It's all hard work and then we're cool afterwards. People always come out of there, banged up, bumped up, bruised up - it's part of the process.”

And while the gym has produced Moreno and several UFC fighters past and present, it’s those future Octagon battlers that often give Muñoz the best work.

“Every time I spar the guys that weren't in the UFC, they try to tear my head off,” he said. :They were trying to prove a point, but I liked it because it keeps me on my toes. If you're not hungry enough, another young lion's gonna come and take your spot, so it keeps you on your toes and keeps you hungry. You gotta smack these young lions around every now and then.”

When Muñoz says this, it’s like that’s the best part of the whole process. And for him, it might be.

“I like to go hard, but as long as you're smart about it, it's good,” he said. “You need it so you're battle tested for your fight. Sometimes I feel like in the States a lot of guys just bitch and whine. They don't want to spar hard, or they complain about the gloves, just a bunch of stuff. We're fighters, we gotta go.”

This weekend, Muñoz’ next go is with Gravely, a fighter with a similar old school attitude who took the long road to the Octagon. But like Muñoz, now that he’s here, he has no plans on going anywhere. Sounds like we’ve got a standoff at the UFC APEX.

“A fight's a fight,” said Muñoz. “It's just another fight, another person in my way of what I want to accomplish. I know he's a tough guy, I know I'm tough and I know I'm better, I just gotta show it the day of the fight.”

So what does an ideal Johnny Muñoz fight day look like?

“There’s a common thing a lot of people say: ‘I'm gonna leave it all in there,’” he said. “I'll tell you one thing, June 4th, I ain't leaving it all in there - the only thing I'm leaving in that cage is Tony Gravely's body."