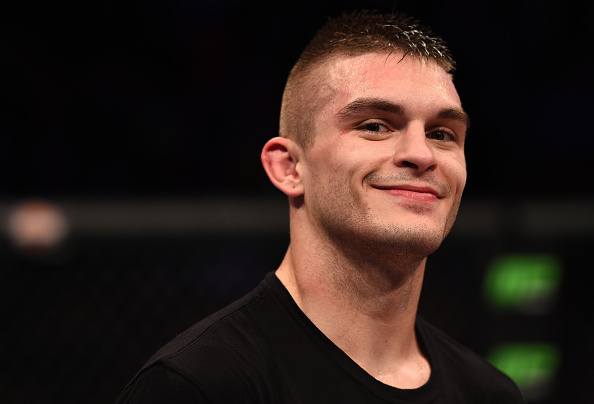 With a nickname like “Hollywood,” you know Johnny Case is going to put on a show.

And perform he has.

The 25-year-old from Jefferson, Iowa has dropped and stopped both opponents inside the Octagon. Last September, the lightweight unloaded both glitz and glamour on Kazuki Tokudome during Case’s UFC debut on the other side of the planet in Saitama, Japan. Halfway through the second round, Case scored a knockdown against the durable Tokudome and then jumped on a guillotine choke, which earned Hollywood his third career submission win and his first Performance of the Night bonus.

Four months later, Case was back inside the Octagon chasing down an opponent with strikes, first standing, then on the ground. “With about two minutes left in the second round, I knew he was breaking,” Case said of his one-sided beatdown of debuting submission specialist Frankie Perez at UFC Fight Night: McGregor vs. Siver. The inevitable TKO via punches happened a couple minutes into the third stanza, which was Hollywood’s 15th knockout across his now 20-4 pro career.

“It was just a matter of me turning it up a gear and looking for the finish,” he said. “I was really expecting [Perez] to be a bigger challenge. Not taking anything away from him, he was a tough kid and a really respectable opponent. I thought he was going to have me in a lot more compromising situations and that never happened. I had a really hard camp and I trained with the best team in the world, and I think that had a lot to do with it. I had already seen the worst possible scenarios play out in the training room and I was ready for anything he had to throw my way.”

Two appearances with two finishes in the books, Case is quickly becoming must-see TV and he is ready to bring his highlight reel-ready action to every fight fan’s doorstep the world over.

“To be honest, it doesn’t matter who I fight, it matters more where I fight,” Case said after winning in Japan and Boston while gearing up for a strikers’ duel in Mexico City. “I want to see the world. What better way than to do that on the UFC’s dime and to knock out some people in the meantime?”

Up next, Case heads south of the border for a UFC 188 showdown with the undefeated Francisco Trevino. Owning a perfect 12-0 pro record, Trevino took home a unanimous decision win in his Octagon debut against Brazil’s Renee Forte at UFC 171. Born in Mexico and trained in Texas, Trevino rose to prominence in MMA after falling in love with Muay Thai and the teachings of his coach Pramajarn Kayan. With eight finishes, including six in the first round, Trevino should provide the high-energy fistfight Case so desires.

“My game plan is pretty much the same for everybody - I’m looking to stand up and I’m looking for the knockout,” Case said. “[Trevino] is no different. I think I see a lot of holes in his game. He’s an undefeated fighter, but as his competition goes up he wins more via decision. I feel like I have the style and the ability to break fighters. Out of 24 bouts, I have only gone the distance twice and I think that’s a testament to the way I fight, the power I punch with, the pressure I put on people and the pace I fight at. I feel like the longer this fight lasts, the worst it is for him because I’ll keep shifting gears on him and keep drowning him in deeper water. I think it’s a bad style for him.”

In preparation for Trevino, Case is busy battling some of the best and brightest the sport has to offer at Alliance MMA in San Diego. It’s a who’s who list of sparring partners for him as he tangles with Ross Pearson, Michael Chandler, Myles Jury, Jeremy Stephens and Justin Lawrence on a daily basis. The coaches are no less notable, with the gym’s owner and head coach Eric Del Fierro, striking coach Adrian Melendez and jiu-jitsu coach Neil Melanson. For wrestling, Case is ripping up the mats with former Pan American Games gold medalist Brian Keck and former US Olympic Greco-Roman wrestling team alternate Darryl Christian.

In addition to all the world-class training during the day, Case is getting his body ready for Mexico City’s 7,400 feet of elevation at night.

“I’ve been sleeping in an elevation tent the past three months,” Case said. “I have been training the right way and I’m in phenomenal shape. I don’t think the altitude will be that big of a factor. If it is, that factor will play against [Trevino] as well. I don’t foresee it being a problem. We all get tired. That’s kind of the point of fighting - you get tired. That’s when the real fight starts. The fight really doesn’t start until you both get tired. Then it’s a fair fight. You get tired in fights, that’s supposed to happen. It’s up to you how you deal with that and that defines your character and your ability as a fighter.”

This Saturday in Mexico City, two lightweights will collide as Case aims for another star-in-the-making performance against Trevino. “They’re going to see two good strikers go at it and that always breeds a knockout,” Case said. “I think that’s what fans like and I think that’s what we’re going to give to them. With me getting my hand raised, of course.”