"I just had some bad luck over the last 12 months, and I’m excited that everything’s falling into place and that I get to fight." - Johnny Bedford 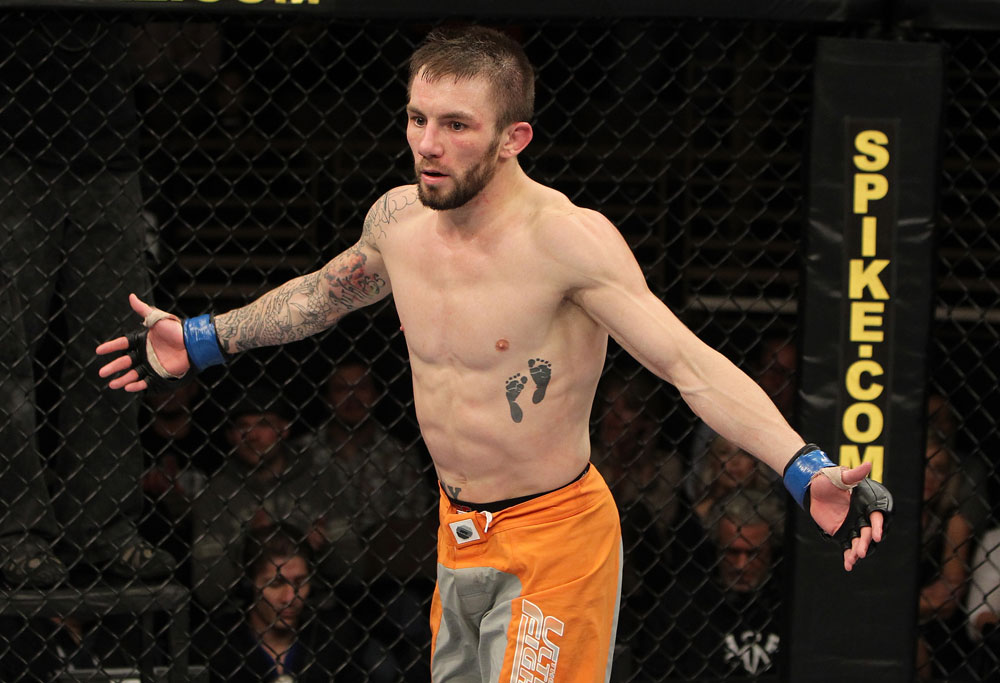 UFC bantamweight Johnny Bedford proudly sports the nickname “Brutal.” He never knew it was going to describe his 2012 campaign up to this point.

“I think you hit the nail on the head,” he chuckles. “It has been a brutal year. I’m one of those guys, my record may only show 30-something fights, but I’ve got close to 50 fights throughout my career, so I’m one of those guys that stay pretty consistent and pretty regular when it comes to fighting. So not fighting for a whole year is something I’m completely not used to. I just had some bad luck over the last 12 months, and I’m excited that everything’s falling into place and that I get to fight.”

Finally returning to the Octagon this Friday for his second UFC fight (against Brazil’s Marcos Vinicius) a little over 12 months after his debut win over Louis Gaudinot in December of 2011, Bedford (18-10-1) has gone through enough trying times in the past year to test the resolve of anyone, something he didn’t expect as soon as the dust settled after his first UFC win.

“I knew that injuries were part of the deal, but it’s really funny because I look at some of the guys from the (Ultimate Fighter) season that I was on, and they’ve got three or four fights already,” said Bedford, a TUF 14 competitor who has seen castmates Steven Siler (four UFC fights), Dustin Pague (four), John Albert (four), Marcus Brimage (three), Dennis Bermudez (three), Diego Brandao (three), TJ Dillashaw (three), and John Dodson (three) all get in at least three bouts including the finale. Dodson even earned a flyweight title shot. Bedford, meanwhile, has been on the shelf.

“I was actually scheduled to be the first one to fight after the finale,” he said. “I didn’t take too much damage (against Gaudinot), it was a pretty one-sided fight, and we asked to get right back on right away. And within two weeks I had already signed my next contract.”

That January fight against former WEC bantamweight champion Eddie Wineland was scrapped due to a Wineland injury though. Stepping in for the FOX 2 card in Chicago was Canada’s Mitch Gagnon, but he was pulled out of the fight as well. Making the most of the situation, Bedford got his show money from the UFC and enjoyed a few days in the Windy City before blowing up matchmaker Sean Shelby’s phone with a request to fight as soon as possible. Shelby obliged, delivering a fight with another Canadian, Nick Denis, on May’s UFC on FOX 3 card in New Jersey.

This time, Bedford, who welcomed a daughter to the family in April with his wife (“She’s a product of The Ultimate Fighter by the way, and it’s a blessing that we have her now,” he laughs), was the one forced out of the fight, this time when he injured the MCL in his knee.

“I don’t know if it’s FOX cards or Canadians, but either way it’s bad luck for me,” said Bedford, whose injury came out of the blue one Saturday night.

“I did an extra workout just because I was fighting in May and I was a month out,” he said of the April mishap. “I missed a few workouts earlier in the week just staying in the hospital (for the birth of his daughter). So I did an extra workout with my Thai boxing instructor, and we weren’t working out 10 minutes when he threw a leg kick at probably 30 percent because we were warming up, and my foot stuck to the mat and all I heard was ‘pop’ and I dropped screaming.”

Luckily, the injury didn’t affect Bedford’s ACL, so no surgery, just rest and rehab, were necessary for him to heal up. But when you’ve been fighting professionally for over six years and training is part of your lifestyle, you can go a little stir crazy.

“It was a hard thing for me,” said the Ohio native and Texas resident. “It was really weird for me to sit out four months and not train at all. I own a gym, so I’m teaching, and I couldn’t even train for two months. It was crazy, so for me to even start rolling again or hitting pads and all that stuff that I do to get ready for a fight, my cardio was terrible and you start doubting yourself. Luckily, I was wanting to get a fight in September so I was training as if I was going to fight and I was so hungry and wanting to get back into the cage that we were ready to take a short notice fight if that possibility came up. I was willing to fight anybody.”

He didn’t get a short notice call. Instead, he was able to get a full training camp in for Saturday’s bout in Las Vegas against Vinicius, a member of the first TUF Brazil cast. And if there is any upside to the time off, he’s had plenty of opportunity to get better and to get accustomed to some new members of his team, including the guys at Team Takedown and their coach Marc Laimon.

“I feel really good,” said the 29-year-old Bedford. “My sparring is obviously not a fight but I’m sparring really hard with really good guys and I do my boxing sparring with nothing but pro boxers, so I don’t think anyone in MMA is gonna box like these guys do. I’m also grappling with a different team - I’m with Team Takedown now with Johny Hendricks and all those guys. Marc Laimon is the head coach and I thought I was a pretty good grappler, but then I go out there with Marc and he just breaks things down and blows my mind, so my grappling is improving every day, and I’m just ready to go.”

Bedford is also now aware that while getting physically and mentally prepared for a fight and just showing up ready to go and to implement his own gameplan got him to this point in his pro career, as the level of competition rises, he’s going to have to break things down a little bit more scientifically moving forward.

“I’m a veteran of the sport and I’ve had a lot of fights, and I’ve never really gameplanned before,” he admits. “My mentality’s always been that I’m gonna go fight my fight and make him fight my fight and I’m gonna come out victorious. Obviously we’re getting to a higher level now, I’m in the UFC now and there’s a little more science to it, and I’m surrounding myself with better people now. I didn’t have Marc Laimon five years ago, so his input has helped me tremendously. So we’re finding out things that he (Vinicius) does well and that he does not so well to take advantage of, and my boxing coach is the same way.”

And if all goes well at the Hard Rock, he’ll be able to pick up where he left off and get moving toward his ultimate goal of winning a world title. It’s a journey that lost a precious year, but at the very least, he can take solace in the fact that while he hasn’t moved forward, he hasn’t moved backward either.

“What I’ve seen in the last 12 months is that the same guys are floating around the top and it hasn’t changed a lot,” said Bedford of the bantamweight division. “There are a few newer guys, and I haven’t gained anything on that ladder by not fighting, but I haven’t fallen either. I think I’m right where I was a year ago, which isn’t where I want to be, but I think if I can get another impressive win and put on a show like I did against Gaudinot that they’ll give me a fight right after, and I’m hoping to fight three or four times in 2013.”

Now all he needs to do is stay away from black cats and not walk under any ladders in the time leading up to Saturday night’s opening bell.

“I’m staying away from anything that brings bad luck, that’s for sure.”