John Moraga: Something to Prove

"I feel like I have something to prove. I am disappointed in the way my last fight went and I have a bit of a chip on my shoulder." - John Moraga 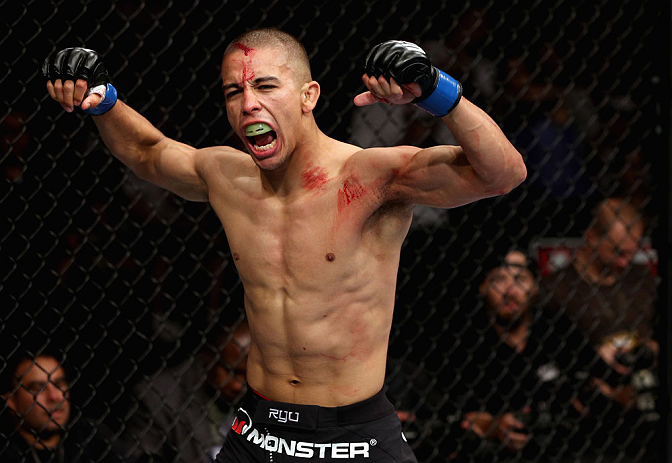 When your trade is stepping into the Octagon and attempting to break the will of another individual, there is always going to be something to prove. There will never be a moment in a fighter’s career where this won’t be true, even in the most basic sense. Yet, some fighters shun the idea and twist the concept around to where the only people they have to please are themselves and those who have invested the time and effort to help them improve, and believe the only pressure which exists is the type they chose to wear.

John Moraga is not of this mindset. He knows he has something to prove, and the chip that resides on his shoulder is a source of constant motivation. While that particular friction has been present throughout his entire professional career in MMA, never has it burned hotter than in the aftermath of his last showing inside the Octagon in June. The 30-year-old Arizona native was determined to make his way back to another title opportunity and the only thing standing in his way was fellow top-ranked 125er John Dodson.

While unofficial, there was a strong chance the winner of the flyweight tilt would get a dance with champion Demetrious Johnson, and those were precisely the circumstances The MMA Lab representative was looking for. Yet, things wouldn’t shake out in Moraga’s favor in the bout. Not even close.

After a slow start from both men kept the pulse of the action shallow, “The Magician” landed a knee strike late in the second round that broke Moraga’s nose. In between rounds the cage side physician deemed the former title challenger unfit to continue and the bout was called to an end. Suddenly, a situation that was within his grasp of control just minutes prior was now out of his hands and he became irate in the aftermath of the stoppage.

There is no doubt the loss was going to push him back down the divisional ladder, but for Moraga, what ate at him the most is that he simply did not perform. He had a great opportunity to show and prove and the end result brought that pre-existing chip on his shoulder to a much more jagged state.

“I feel like I have something to prove,” Moraga said. “I am disappointed in the way my last fight went and I have a bit of a chip on my shoulder. I feel I need to go out there and show people I deserve to be ranked where I’m at and that I deserve the toughest opponents that will allow me to work my way back toward a title shot.

“I had to take a little bit of time after this last fight because of my nose, but I’m really mad about the last fight. I don’t feel I necessarily held back, but I didn’t really get a chance to fight. I didn’t get a chance to get a hold of Dodson and get into the exchanges I wanted. Not only that, but when the opportunities were there for me, I didn’t take advantage of them. That’s been eating me up and I’m ready to get back in there and put on a show.”

The Arizonian is eager to get back into the fray and he’ll get that opportunity when he faces off with highly touted prospect Justin Scoggins at UFC Fight Night: Souza vs. Mousasi this Friday night. The bout pits a proven title contender against a fighter who has shown flashes of brilliance but is yet to topple an opponent from the upper-tier of the division.

There is considerable distance between where Moraga and Scoggins currently reside on the divisional hierarchy, and that is a point of contention for the Glendale-based fighter in the matchup. Moraga certainly understands “Tank” has an admirable skill set, but doesn’t know what beating the 22-year-old South Carolina native does for him in the grand scheme of things.

Nevertheless, Moraga isn’t keen on saying no when the UFC comes to call, and he sees the fight as another opportunity to further secure the future of the things that matter most to him.

“I don’t know what this fight does for me honestly,” Moraga explained. “You look at Scoggins and he’s not even really ranked. When they told me about this fight it seemed strange to me. I don’t like to turn fights down, but I didn’t really see the point in fighting a guy that just lost to a guy that I just beat. I know he’s a tough opponent and I’m not going to overlook him in any way. We are at the elite level and we are all pretty close, but what separates the champion from the lower level guys are mental toughness, focus and the ability to make adjustments during the fight to get the job done.

“It is going to depend on performance as to where this puts me, but I still don’t know what this does for me. Best case scenario is I go in there and knock him out in one minute or get the finish in the second or third round.  What I do know is that it will put money in my bank account and get me one step closer to extending into another contract. It also helps to secure a better future for my kids and that is my biggest motivation.”

When looking at the matchup against Scoggins, Moraga believes “Tank” will attempt to use a wrestling-heavy attack throughout because it will be his only option. Moraga is extremely confident in his stand-up game and doesn’t believe there is another flyweight (Dodson included) that really wants to stand with him. That said, Moraga believes Scoggins will attempt to take the fight to the ground, and once that tact fails, things will go downhill rapidly from there.

“I think trying to wrestle me the entire time is his only chance to beat me, just like Dustin Ortiz tried to do,” Moraga said. “That’s what he’s going to try to do and I’m not going to let that happen, but this fight is going to come down to who can implement their game. I think he’s the type of fighter that when things are going his way he’s really tough to beat, but when things aren’t going his way he’s not the same fighter. That was obvious in his last fight. I definitely see that in him.”