John Moraga: Fighting For More Than a Title

"If you hit me, I want to get that back immediately. At every point in the fight, I’m looking to fight." - John Moraga 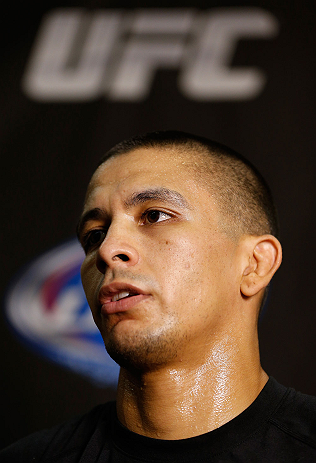 Fighting was John Moraga’s way out, the thing that put him in a FOX-televised main event this Saturday against UFC flyweight champion Demetrious Johnson, and that allowed him to provide a life better than the one he had for his sons John Jr. and Anthony. But if the two boys wanted to follow in his footsteps, that’s a bridge Moraga hopes he doesn’t ever have to cross.

“I definitely don’t want them to fight,” he said. “I would have a long talk with them and tell them that there are a lot of other things that they can do and try to put my two cents in. I just want to give my kids the best knowledge of all their options and let them be their own person and decide what they want to do from there.”

Moraga is old school in that way. Parents always want better for their children, and as successful as the 29-year-old from Phoenix is at the moment, one win away from a world championship, he doesn’t want his kids to go through the blood, sweat, and tears necessary to make it in the fight game. It’s a game Moraga entered only because he wanted to provide a good life for his kids.

“I really had no clue what I was gonna do, and it was only my sons that made me actually do it,” he said of his fighting origins. “But I knew if I was gonna do it and if I was gonna fight, the only way that I was really going to make a good living out of it and make it worth it was for me to become a world champion. So I pretty much had that in my head when I got into the sport.”

A former Arizona State University wrestler, Moraga picked the brain of another ASU alum, good friend Cain Velasquez, about the fight game, and while he got plenty of useful information, at the time of his debut in 2009, there was no high-profile place for him to show his wares. That was a problem. But he was still a believer.

“When I started MMA, UFC didn’t have 125, and the WEC didn’t even have 125,” he said. “But I kind of had this vision that this was all gonna play out. People won’t believe me, but I seriously had this vision. I had faith that this would all happen, and it did.”

And fairly fast at that. Fighting as often as he could, Moraga put together an 11-1 record from 2009 to 2012, garnering a call from the UFC. Two impressive finishes of Ulysses Gomez and Chris Cariaso later, he was notified that he was getting a shot at Johnson’s flyweight crown.

“It was a bit of a surprise, but considering the way things have played out in the division with the people who had lost and the people who I beat, I thought it was possible,” said Moraga of his ascension. “But it was a little bit surreal that it actually happened so quick.”

What isn’t surreal is his talent and tenacity. Moraga can handle himself on the feet or the ground, but what may separate him from his peers is his mental toughness, something he rightfully prides himself in.

“I think the mental game is the strongest part of my game,” he said. “That’s something I’ve been having to deal with since I was young and something I learned right off the top when I was young and in high school. I learned to control that mental part of the game and to stay focused and to just know that I can make it happen. For me, the mental part of the game is locked down. I don’t have a problem with that.”

Not surprising when you’ve had to come up the hard way in a rough neighborhood surrounded by crime, gangs, and death. To survive such an environment is impressive enough; to thrive in spite of it takes things to another level. Moraga doesn’t take credit for it though. For that, he thanks John Jr. and Anthony.

“It’s a complete turnaround from the person I used to be,” he said of fatherhood. “Before I had kids I didn’t really care about consequences. If I knew something had a consequence to it but I still wanted to do it, I would do it. Now, if I do something stupid or get in trouble, my kids will have to suffer because I’m not there for them. It’s not me that suffers through it anymore; it’s the whole family that I have to worry about. So it kind of made me grow up overnight. I had to swallow pride that I’ve never been able to do before, and it made me grow up. There’s no way that knowing what I went through that I would do anything knowingly to let them go through anything that I went through.”

That kind of motivation makes a fighter tough to beat, and when asked to break down his first championship match, he makes a point to remind you what kind of fighter he is.

“I see a smart fighter, but I don’t see a true fighter,” said Moraga of Johnson. “He’s a point fighter. He says that he tries to finish people, but he doesn’t have that meanness to him. If you hit me, I want to get that back immediately. At every point in the fight, I’m looking to fight. I’m not trying to bounce around and win this round and win the judges over. I’m trying to throw a punch to hurt you.”

And he does it so his kids don’t have to.

Check out John Moraga in UFC on FOX 8: The Title Fight