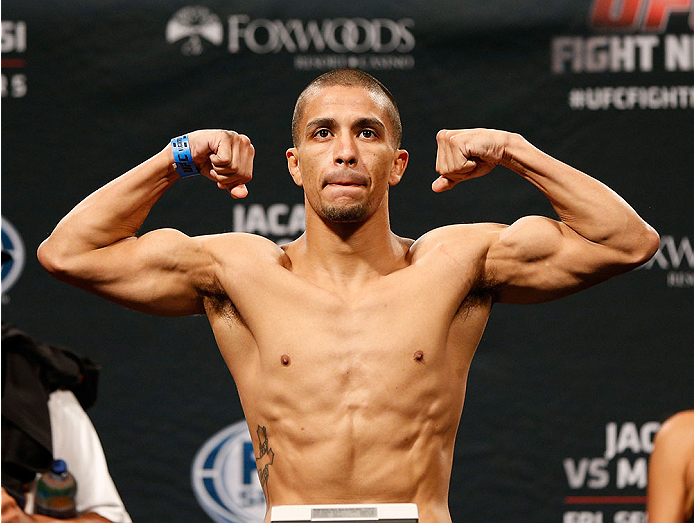 John Moraga is still figuring some things out.

That may seem strange to hear when considering the fact that he is a former title challenger and a perennial contender to the flyweight crown, but the MMA Lab representative is starting to see things inside the Octagon from a different perspective. While he knows he has the power to put any other 125er away and the moxie to stand within the lines of fire to launch the one that counts, the 30-year-old Phoenix native is beginning to recognize the other strengths in his all-around game.

While wrestling and jiu-jitsu are necessary skills in the well-rounded game that has become modern day mixed martial arts, Moraga has come to understand his ability to adjust in the heat of the moment is a dangerous asset to have at his disposal. He’s also quick to admit that coming to this realization wasn’t an overnight process, but when your trial and error is taking place while trading punches, knees and kicks with the best fighters in the world, learning on the fly is a term that doesn’t seem to do justice.

There is a belief - and one that often rings true - that some fighters are different fighters when things are going their way, but become different competitors when the chips are down. When the timing is picked up, the punches are snapping their opponent’s heads back with frequency, all cylinders are firing and the confidence begins to boil up is one thing. Yet, on those nights when said fighter is a step too slow, his face wearing the work put in from his opponent’s jab and the cage becomes smaller with each waning second, the internal machine begins to crumble.

That’s not John Moraga and he proved it against talented prospect Justin Scoggins at Fight Night: Mousasi vs. Jacare back in September.

“No matter whether I’m down and things aren’t going my way, I can still finish a fight,” Moraga said. “I have the skills and the mental ability where you can be beating me every round and minute of the fight but when I find that one opportunity, I’m ending it. If there is time on the clock I know I can still win the fight. There’s never any doubt in me and I’m dangerous every second the fight is on.”

Despite being a heavy favorite, Moraga found himself on the business end of things as “Tank” worked a wrestling-heavy game plan to dominate the opening round, which undoubtedly provided a huge confidence boost to the South Carolina native. He wasted no time employing the same strategy in the second round, but just when it seemed as if Moraga’s bending was about to give way to breaking, he flipped the script and ended the fight with a slick guillotine choke he caught off a Scoggins takedown attempt.

While flyweights typically move at 100 mph and their technique often goes unappreciated, the slow motion replay showed precisely why Scoggins started rapidly tapping. And while few things went his way during the fray, Moraga emerged from the bout not only victorious, but with a better understanding of his talents inside the Octagon.

“I didn’t really do anything I wanted or had planned to do in that fight because I wanted to do it on the feet,” Moraga said. “I expected Scoggins to play the game on the feet with me, but he caught me slipping early. Every time I go out there to fight it’s almost like my emotions take over. I’m thinking bonus money. I’m thinking about making the fight exciting and giving the fans what they want to see. I want to scrap and I have to realize that people are not going to do that with me. Or maybe that’s just in general because people want to win in MMA and they won’t hesitate to work a boring game plan to make sure they get the victory.

“Against Scoggins I thought we’d feel each other out on the feet and then I’d put the pressure on him from there. But I kind of marched at him looking to make some exciting exchanges happen for the fans and he wasn’t anywhere near about that. He took me down and made it clear that’s where he wanted the fight to take place. He went right back at it in the second round and I found a spot to catch him in that choke and ended the fight. I didn’t get to show the skills I wanted to, but that doesn’t mean they aren’t there. I got the victory and it made me realize I need to fight smarter. I’m still learning, man. I’m getting more experienced with each and every fight.”

The flyweight division is only going into its third year of existence under the UFC banner, but Moraga has already locked up with a collection of the best in his weight class. He’s won four out of his six showings at 125 pounds, with his only losses coming to current champion Demetrious Johnson and fellow perennial contender John Dodson, when their fight was ended via doctor stoppage back in June. While neither of those fights ended the way Moraga had hoped, they further the notion that the transition he’s making is a game changer.

The John Moraga that fought for the flyweight back in 2013 is not going to be the same fighter that steps into the cage this Saturday to face Willie Gates at UFC on FOX: Dos Santos vs. Miocic in Phoenix. He’s picking up new tools at a rapid pace, but more importantly, he’s learning how to keep his opponents guessing.

The chip on his shoulder will still be there, but what people think they know about what to expect won’t do them any good when the Octagon door closes.

“I’m a fighter who outsmarts other fighters,” Moraga said. “I make them change what they want to do. In my first fight with John Dodson I was getting the better of him in every exchange, and in the second fight, he kept his distance, which I didn’t expect. I also have a tendency to over-think in there and that freezes me up sometimes and stops me from fighting off of instinct and technique. Those are the things I critique after every fight. Coming out of my fight with “Mighty Mouse,” I knew I needed to be more patient, but in my fight with Dustin Ortiz right after that, I was too patient. This last fight had its growing pains too but I’m learning and I’m still in the mix. I believe the UFC respects me and my time will come.”

And while he was originally slated to face a higher-ranked opponent in Jussier Formiga before the Brazilian was forced to withdraw due to injury, Moraga is still eager to compete in front of his hometown crowd. He fully understands that facing a relatively unknown competitor in Gates who has nothing to lose and everything to gain is a dangerous position to be in, but Moraga simply wants to put on a show for Phoenix’ fighting faithful.

“I’ve always dreamed about fighting in the UFC and doing it in Phoenix,” Moraga said. “Fighting for the biggest organization in the world in front of my hometown crowd, the only thing that would make it better is if there was a title on the line. The Formiga fight was a good matchup but I didn’t dwell on the injury. They got me an opponent and Gates is a tough fighter. There isn’t much tape on him but from what I have seen he’s a very dangerous fighter and I’m taking him as a very serious opponent. You never look past anyone in this game. I’ve made that mistake before and it won’t happen again.

“I just need to fight my fight and make the adjustments I know I can make. I’ve been working my butt off in the gym, and as long as I keep improving my skills and keep my mental game locked in, then I know I can beat anyone in the world.”