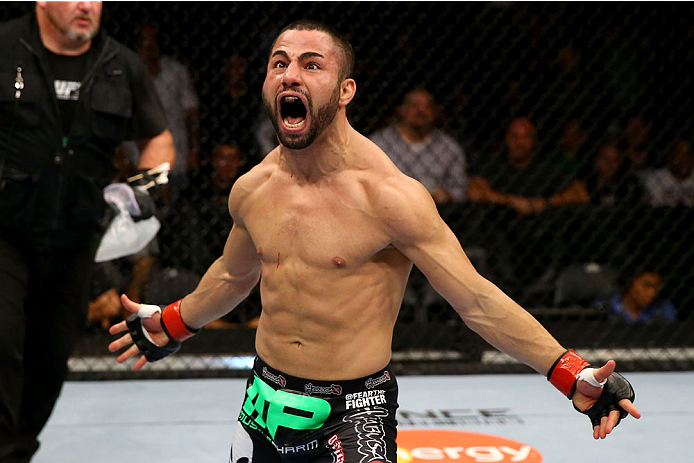 Ask any fighter and they will tell you going a year or more without a fight is torture, regardless of the circumstances. It doesn’t matter if it’s a crippling injury or outside of the cage adversity, spending a year on the sidelines is stressful and tough to endure.

“To be honest, this has been my roughest year yet,” the Halifax-born, Montreal-based lightweight admits. “It’s been a lot of adversity, a lot of obstacles thrown my way. It has been a whole year of restructuring my life, the people around me.”

The last time “The Bull” stepped into the Octagon was February 1, 2014 at UFC 169 against Alan Patrick. Riding a three-fight winning streak, Makdessi used his traditional karate style to attack from range and pressure the Brazilian in a back-and-forth fight that many unofficial judges watching the bout scored in favor of the Canadian.

“I hate losing more than I love winning, and losing that fight, it made me kind of reassess mixed martial arts,” Makdessi, who has picked up wins over fellow Canadian Sam Stout and TUF 14 alum Daron Cruickshank en route to a 12-3 record, snaps. “I left karate because it was a point system and I was frustrated. Now, MMA is starting to adopt that point-system mentality and I don’t understand why.”

He vents about judging, wondering aloud what the three officials charged with scoring his fight saw that resulted in them scoring the fight in favor of Patrick. He talks about accuracy in the striking game and ponders how a fighter can earn credit for failed takedown attempts, adding emphasis on the word “failed.”

He pivots from his fight with Patrick and focuses in on how fighters are approaching the sport as a whole, circling back to the point-fighting comment he made earlier. It’s a sticking point for someone that started taekwondo at a young age and found success in karate before transitioning to mixed martial arts.

He exhales deeply, resetting himself after having voiced the frustrations that have been hibernating inside of him since his last appearance.

This absence has been more self-imposed than situational. There wasn’t a major injury or suspension that left him no choice but to take time off, though he did have surgery. The last year has been about re-evaluating his situation, re-grouping and getting ready to make a real run in the UFC lightweight division.

“I had eye surgery.  I had strabismus and it really bothered me. I had it since childhood and it kept coming. It was a personal thing that was bothering me. I fought through it, I trained through it, but it was something that mentally was always in my head – that I wanted to fix my eye.

“I wasn’t hungry and I wasn’t happy where I was at. People are always like, ‘You should be happy – you’re doing really good,’ but it’s funny because people don’t understand how much work, how much sacrifice it takes to strive for perfection and try to achieve the dreams I had as a kid of being world champion.”

This year has clearly weighed on Makdessi, but it also seems to have given him a fresh perspective on the talented lightweight. Originally scheduled to face Abel Trujillo of the Blackzilians, the returning 29-year-old will instead meet UFC newcomer and fellow Canadian Shane Campbell in the main card opener.

Switching from the power-punching, wrestling-based Trujillo to the taller, rangier Muay Thai standout, who made headlines earlier in the year after breaking out a Street Fighter II hadouken after dropping Derek Boyle with a body kick, presents obvious challenges, but Makdessi isn’t worried about what his new opponent brings to the cage.

He’s focused on his skills, his repertoire and making the most of his talents each time he crosses the threshold into the Octagon, something Makdessi feels he hasn’t done yet in the UFC.

“I always tell people that through martial arts – through fighting, through competing – it teaches you about yourself and life in general. It really tests your heart; it tests your will power. This is why I truly believe mixed martial arts is the hardest sport in the world, because of the adversities and the complexities of the sport and how hard it is in the business aspect and building yourself up.

“I truly believe my full potential in the cage hasn’t been seen yet,” he adds. “I haven’t found my comfort zone, but I’m starting to understand myself better. I’ve never felt so hungry before in my life. I never trained so hard before in my life. I’ve worked on my conditioning and my nutrition has been optimal. This is time for me to release the emergency brake and fight to my full potential and do everything that I’m capable of doing.”