John Makdessi and The Fighter's Process

"I truly believe I am an exciting fighter, and that’s my goal. I’m not
just there to win the fight; I’m also an entertainer, and that’s why
people want to pay – to see entertaining fights." - John Makdessi 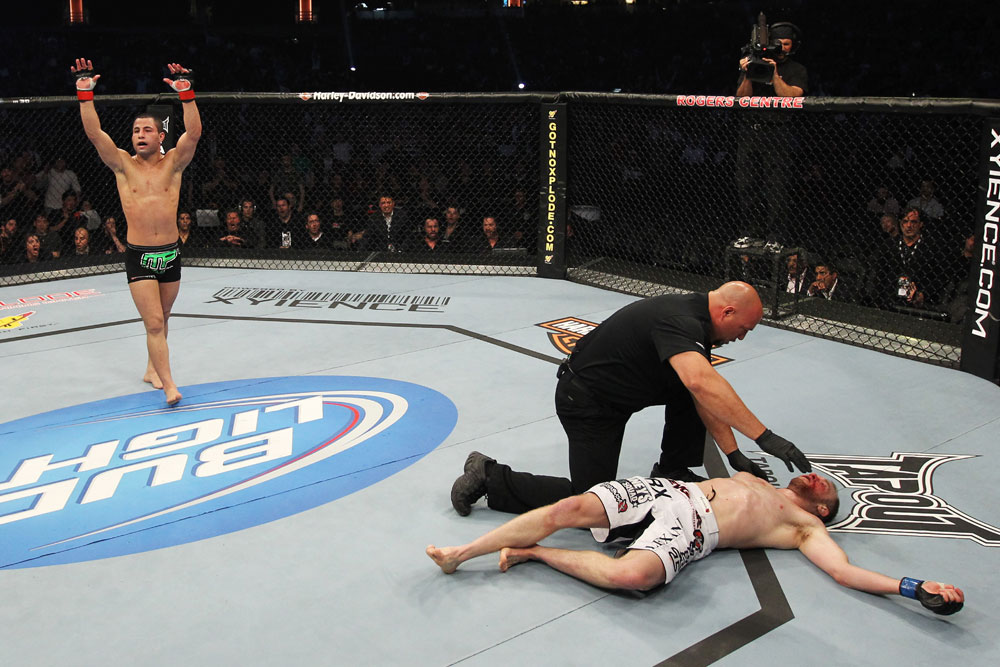 For my money, John Makdessi’s spinning backfist finish of Kyle Watson at UFC 129 in Toronto on April 30, 2011, was one of the greatest knockouts ever seen in the Octagon. Yeah, it didn’t even get Knockout of the Night honors (that went to Lyoto Machida’s KO of Randy Couture, but nonetheless, if you watch it again, you will want to watch it repeatedly, even if only to figure out how the Nova Scotia native pulled it off. Know this though, it wasn’t easy.

“I remember it clearly in my head,” said Makdessi of the move he learned from one of his coaches at the time, kickboxing champion Angelo DiBella. “The third round came and I told myself, I’m gonna go for it. I’m gonna fake the kick because I threw a lot of kicks to the body and the guy thinks I’m gonna kick him. It took me two rounds to set that up because it’s very hard to set up perfect shots. It’s like hitting the lottery. I set it up and you can’t ask for a better scenario.”

As soon as Watson got hit, it was lights out. Makdessi had his ninth pro MMA win without a loss, two of them coming in the UFC.  But in his next two bouts, Makdessi would taste defeat, getting submitted by Dennis Hallman and decisioned by Anthony Njokuani. It was an unforgettable lesson: the MMA Gods giveth, and they can taketh away.

“There are so many variables,” he said of life in the fight game. “Since I was six years old I’ve been competing at a high level, and sometimes in sports, your losses teach you more than your wins. I was so focused on the outside and things that I couldn’t control, and I lost focus and got a little bit distracted. I was searching for that great team, for those great coaches, and I was always searching instead of trusting myself. I changed so many trainers and changed so many gyms, and at one point in my life it was like a love-hate relationship. I think I cared too much and I put the emergency brakes on. I lost that emotional energy that I used to have before. I had to find myself and those losses really made me re-evaluate my situation and my team, and I’m always trying to progress and get better, and most importantly, being comfortable with being uncomfortable.”

Settled in at Montreal’s Tristar Gym, Makdessi got back on track seven months after the loss to Njokuani, putting on a technical striking clinic against Sam Stout at UFC 154. 2013 has been just as impressive, as Makdessi outpointed Daron Cruickshank and knocked out Renee Forte, re-establishing himself as a top prospect at 155 pounds. More impressively, the man dubbed “The Bull” has shown himself to be more of a matador, as he’s picked apart opponents while retaining the essence of his style. He’s not a wrestler who eventually turns into a brawler, or a striker who morphs into a wrestler. He came in as a striker, and he’s willing to carry that as far as it will take him.

“I was very fortunate to work with some good guys and very smart guys,” he said. “And it’s very simple. People always tell you to try and focus on your weakness. The thing is, you’re always going to be focusing on your weaknesses, but don’t forget your strengths. My strengths got me to where I’m at. At one point in my life I was so focused on working on my weakness that I kind of forgot about my strengths. And that’s a mistake a lot of fighters make. They’re so scared of what the other guy’s gonna do. But that’s out of my control, so I focus on me.”

This Saturday, the focus will be on Brazil’s Alan Patrick, a jiu-jitsu black belt who nonetheless impressed with his stand-up in his Octagon debut last October, knocking out striker Garret Whiteley. The Brazilian is a free swinger and seemingly tailor-made for Makdessi’s precision assault, but despite the possibility for a flashy finish, many were surprised that the Canadian didn’t get a higher-profile foe. For the 28-year-old though, it really doesn’t matter, because a win keeps him moving forward, no matter who his opponent is.

“My goal is to fight the best and be the best and I want to hopefully get that opportunity to be in title contention,” he said. “That’s every fighter’s goal. The UFC gave me this opponent, and I respect all opponents, but I don’t really think too much about him. The fight’s gonna take care of itself.”

It’s a simple approach to a complex game, but as Makdessi points out, the majority of what goes on when the bell rings has little to do with technique, and everything to do with what goes on between a fighter’s ears.

“People tend to forget that fighting is mental, so I’ve been focusing more on my mental game and just mentally being more ready for each fight,” he said. “90 percent of the time, it’s the analogy of the stairs. To reach the top of the stairs, you’ve got to go step by step. So to win this fight, it’s inch by inch and step by step. It’s all about being sharp, and I try to be a complete fighter and master my techniques.”

If he does that, the rest usually falls into place: excitement, wins, and knockouts. It’s a lesson two losses taught him and that he’ll never forget.

“I never really cared about the record,” said Makdessi. “The amateurs focus too much on the outcome, while the professionals focus on the process. I lost track on the process and focused too much on things I couldn’t control. I truly believe I am an exciting fighter, and that’s my goal. I’m not just there to win the fight; I’m also an entertainer, and that’s why people want to pay – to see entertaining fights. And that’s what I try to do each day.”