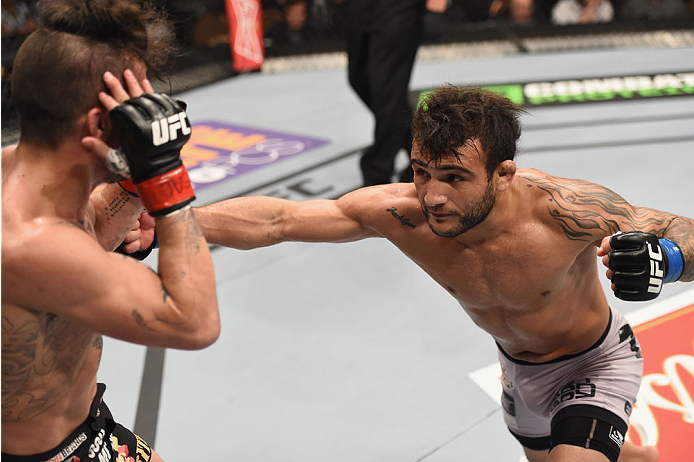 If you were expecting John Lineker to wax poetic on the differences in his state of mind or the new additions to his fight game in camp since his move from flyweight to bantamweight for Saturday’s UFC 191 bout against Francisco Rivera, think again. Instead, he keeps it brief – like most of his fights – simply saying that the only difference for him in camp these days is “just not having to cut so much weight.”

Fair enough, but that may be what it takes for Lineker to make another move in the eyes of the public – from 125-pound cautionary tale to 135-pound contender and possibly bantamweight champion. The Brazilian’s battles with the scale have been well documented, with four of his eight UFC bouts resulting in him missing weight. Some fighters could have gotten the axe for such repeated offenses, but Lineker has been so good, winning six of his eight Octagon bouts, that there was always the idea that he would figure things out in time to get a world title shot.

He didn’t, with the final straw being his coming in at 130 pounds for a January bout with Ian McCall. A win likely would have earned him a shot at Demetrious Johnson’s flyweight title, yet while he won, decisioning McCall, coming in overweight instead earned him a mandatory move to 135 pounds.

When asked about an eventual return to flyweight, “Hands of Stone” admits that “I’d like to maybe come back to flyweight for a title shot,” but at the same time says that “135 is easier.”

Making 135 is easier, and something the 25-year-old is used to from his pre-UFC days in the division, but fighting the gang of stalwarts at bantamweight will be no easy task, and he knows it.

“It’s a tough division, but I am ready,” Linker said through translator / manager Alex Davis. That trek through the weight class begins with Saturday’s bout against the 12th-ranked Rivera, who snapped a two-fight losing streak in June with a 21-second knockout of Alex Caceres. On paper, this is a clash of knockout artists with Fight of the Night potential. It’s also a matchup very agreeable to Lineker.

“Yes, this is perfect,” he said. I like him as an opponent. I like guys who will go in there and slug it out. He has a longer reach, but I have fought guys like that before.”

A win will make a statement, especially with it coming in Las Vegas on a big card headlined by a championship fight, even if that championship fight is in his former division. But Lineker is hopeful that his move up this divisional ladder is more successful than the last one.

“I am not sure (how long it will take to get to a title shot),” he said, “but I intend to put on strong performances and go up through the division.”