"Ian McCall is a great fighter. I respect him as I do all my opponents. He does talk too much though. He talks more than the talking cricket. (Laughs). He talks as much as he runs." - John Lineker 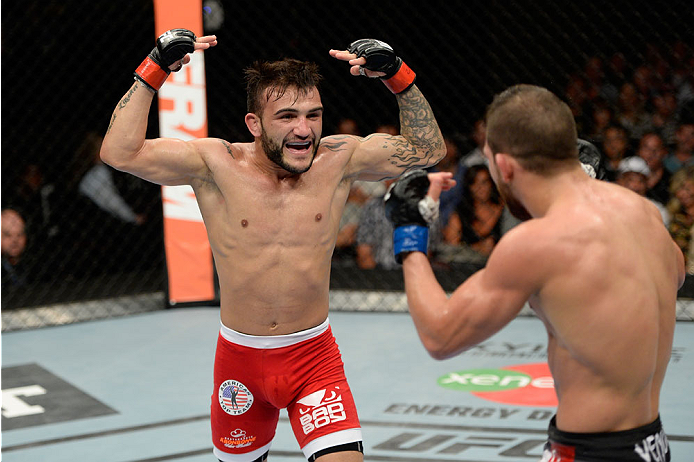 Mixed martial arts, like so many sports, is a game of inches, or, in the case of John Lineker, a game of pounds.

For much of 2013, the first thing that came to mind with Lineker wasn’t the knockout power in his “Hands of Stone,” but his pitched battles with the scale on weigh-in day. Yet beginning with his February bout against Ali Bagautinov, Lineker has made weight in two straight bouts, and he expects to hit the 126-pound mark once again today for his Saturday bout against Ian McCall. The Brazilian bomber couldn’t be happier.

“Thanks to Dr. Marcos Aranha, my trainer Ocimar Santos, and my physical trainer Hernan Sampaio, weight is not an issue anymore with me,” Lineker said.

That’s a good thing, because now people can start talking about him as a potential challenger for the UFC flyweight title again, a prospect that many believe will become a reality should he defeat McCall in the UFC Fight Night co-main event in Uberlandia.

“If I beat McCall, and I will, I will deserve that shot,” Lineker said, putting in his vote for this bout to be a title eliminator. And while it hasn’t been officially described as such, this fight does feel like there’s more weight on it than your average fight. Maybe it’s because of the intriguing style matchup between two of the best 125-pounders in the world, or perhaps the combatants’ pre-fight trash talk has fans more amped up than usual. Either way, Lineker can’t wait to hear the opening bell ring.

“Ian McCall is a great fighter,” he said. “I respect him as I do all my opponents. He does talk too much though. He talks more than the talking cricket. (Laughs). He talks as much as he runs.”

Oh yeah, when you compare your opponent to Disney’s Jiminy Cricket, those are fighting words. McCall hasn’t shied away at firing back at Lineker, though the Paranagua native is less annoyed and more amused by the whole trash talking thing.

“I am not irritated in the least,” he said. “Now Ian on the other hand, he does seem irritated, doesn’t he?”

Only “Uncle Creepy” can answer that question, but when all the talk settles down, these two still have to fight, and it’s shaping up to be a good one if recent form is any indication. McCall has won two straight, most recently defeating Brad Pickett, and Lineker earned Fight of the Night honors in July with a third round TKO of Alptekin Ozkilic.

“He is a tough guy,” Lineker said of Ozkilic. “I have never felt a guy take so much punishment and keep on coming.”

The will of Ozkilic helped make their bout Fight of the Night, but against Lineker, you can only take so many bombs before you have to concede. If he can defeat McCall, that would be six wins in eight UFC bouts, and as he goes into this bout, four of his five Octagon victories have come by knockout. You don’t see that too often in the flyweight division, and it would immediately make him champion Demetrious Johnson’s most serious threat. And though Lineker respects “Mighty Mouse,” he would love to beat him and join featherweight boss Jose Aldo as the only world champions currently hailing from Brazil.

“He is a great fighter and he is the champ,” Lineker said of Johnson. “But I will take his belt when I get there, and it would be fantastic to give the Brazilian people a reason to be happy. They have not had a lot lately.”

That’s a plan for next year though. For now, it’s Ian McCall, and nothing happens without beating Uncle Creepy.

“I will fight as I always do,” Lineker said. “I love to fight, I always bring my best, I always let it all hang out, and that’s what I’ll do again.”