John Lineker: Ready for the World, One Fight at a Time

"I will give my best as always. I never promise victory, but I promise to give my best." - John Lineker 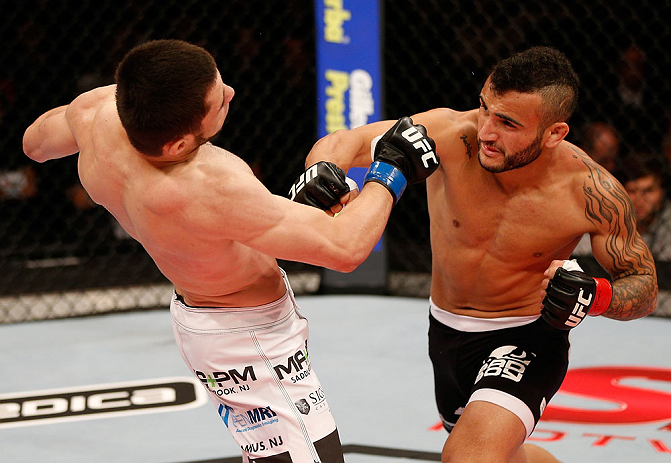 If being able to adapt seamlessly and without stress to an ever-changing fight game is a key to eventual success, then Brazil’s John Lineker may have championship gold in his future. So when the 23-year-old was informed that his UFC 163 opponent was being switched on short notice from veteran Phil Harris to newcomer Jose Maria due to injury, “Hands of Stone” didn’t bat an eye. He already had everything covered.

“I train to fight the greatest fighters,” said Lineker through translator Michele Spinelli Davis. “So I am okay with the opponent change. I am prepared for every situation in this fight.”

It’s a great attitude to have, because if you can’t deal with adversity in this sport, you won’t last long. And if Lineker knows anything, it’s about dealing with adversity. A pro since the age of 18, the Paranagua native won his first three bouts, but then went on an up and down (mostly down) stretch that left him with a 6-5 record as 2009 closed.

“I did think about giving up,” he admits. “But I kept my focus on God and continued fighting.”

And suddenly he began winning. 13 straight fights to be exact, with the capper being a 2011 decision win over future UFC fighter Iliarde Santos that netted him the Jungle Fight bantamweight title.

“I just trained a lot, I trained more than ever,” he said of his remarkable turnaround. “I kept my faith in God and everything happened.”

Next up was a call to the UFC to become the first Brazilian fighter in the promotion’s new flyweight division, but the adversity wasn’t over yet, as a rough weight cut, coupled with an almost him against the world scenario since his cornermen couldn’t make it to New Jersey for the fight, left him in dire straits before the biggest fight of his life.

Yet despite everything seemingly conspiring against him (he reportedly came to the States without a mouthpiece or cup either), he delivered a Fight of the Night performance against Louis Gaudinot before getting submitted in the second round. It was a loss, but one that didn’t mar his future prospects, and after back-to-back UFC wins over Yasuhito Urushitani and Azamat Gashimov, those days in Jersey are far behind him.

“I didn't have a complete team in my first fight, and what I mean is that I didn't have a nutritionist, and I never did strength and conditioning sessions,” he said. “Back then, those things made my weight cut really difficult. Today, I have all the structure needed to develop my diet and to cut weight in the right way and also to be ready for the fight.”

And with Marcelo Ribeiro handling matters in the gym and renowned manager Alex Davis taking care of things outside the Octagon, Lineker can concentrate on fighting. This week? The challenge is the seasoned Maria, a veteran of 38 pro fights (33-3, 2 NC).

“He is an excellent fighter,” said Lineker. “I can say that I will be ready for his ground game, and I will give my best as always. I never promise victory, but I promise to give my best.”

Unbeaten in 17 straight, with 12 consecutive victories, the 31-year-old Maria may be a new face to UFC fans, but he’s made his bones in the fight game, and with 28 of his 33 wins coming by way of KO or submission, this could be another Fight of the Night worthy scrap for Lineker. More importantly though, if Lineker gets his hand raised for the third time in the Octagon, it could thrust the Brazilian into the thick of the title picture.

“With a third straight win in the UFC I think I might be getting close to a title shot, but this is not only up to me,” he said. “Whenever the UFC thinks is the time for me, I will be ready.”

When you’re training for the greatest fighters in the world every day, there is no truer statement.