"I think I’ll be a more powerful beast at 170 and I think I can really do some damage in that class." - John Howard 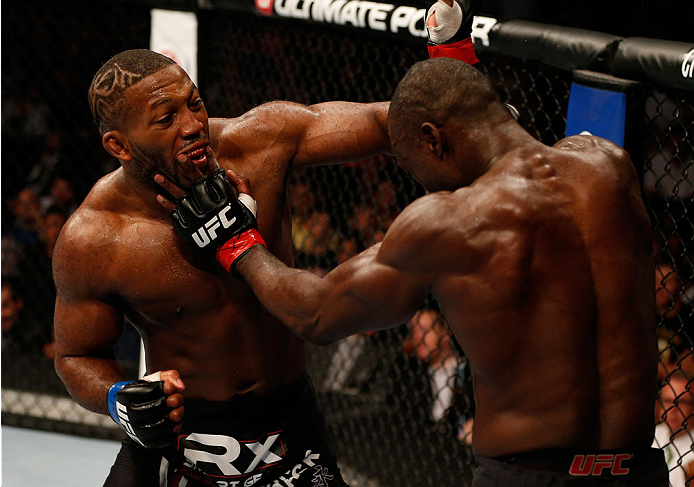 It was one of the great stories of 2013 – John Howard not just returning to the UFC after more than two years, but winning two bouts against Uriah Hall and Siyar Bahadurzada and re-establishing himself as a fighter to watch in the Octagon.

But the even better story when it comes to the Boston battler may be that through everything – the ups, the downs, the sideways – he never strayed from the Wai Kru team that got him to the big dance in the first place.

“When you go somewhere and you make it because of the team that helped get you there, you don’t abandon them,” said Howard. “Loyalty is real important to me, and I like to show the UFC and other people in the world that I am loyal to the people who got me there. It’s not always gonna be a sentimental story where’s everything’s all good; there are gonna be good times and bad times, but you have to be loyal to the team.”

“When I met John Howard, I made him a couple promises, and I’m proud that I stuck by them and I delivered,” said Kru John Allen, Howard’s longtime coach. “Of course, he’s the one doing the work and delivering, but as a coach, you’re in a position where there are two ways you can go about things. One is to be very protective and shelter your fighter from other camps because you’re afraid they’ll see something that you don’t have and they’ll want to leave. My philosophy is exactly the opposite, and I told Doomsday this right when he started in the UFC and people were asking why he didn’t move to a bigger camp. I’m not in this game to hold him back. I consider John Howard family to me, and if there’s a situation that’s better for him, I’ll go with him to that camp or he can go himself. I would never try to control him like that. This isn’t about me or about Wai Kru as a brand; it’s about John Howard as a fighter and as an individual, and what’s best for John is best for me because my motive here is for him to become a world champion.”

This relationship helped Howard develop as a fighter without the stress of wondering whether he was truly progressing or if the grass was greener outside of Massachusetts. He spent some time at the Grudge Training Center with Allen in the past, and the door is always open for him to seek out additional work elsewhere if that’s what he feels he needs. But at 31 years old, and with wins in four straight bouts, two in the UFC, it’s clear that things are working for Howard, and he hopes to keep the momentum going when he faces unbeaten New Yorker Ryan LaFlare in Abu Dhabi this Friday.

“It’s a dream come true,” said Howard. “I get paid to travel the world and fight. I’m a kid from Dorchester, I come from humble beginnings, and I’m going to keep going. Hopefully I can move to the second tier of the UFC and be the next superstar and the next welterweight champion. That’s my dream and that’s what I’m looking forward to.”

It’s a dream that can become a reality if Howard keeps winning as the stakes get higher. But it was a dream deferred back in 2011, when a 4-0 start in the Octagon was followed by three straight losses to Jake Ellenberger, Thiago Alves, and Matt Brown. Following the Brown defeat, Howard was cut from the roster, forced to regroup on the local scene.

He did, moving back to 185 pounds, where he won six of seven bouts before accepting a short notice return to the Octagon to face Hall. Meeting the highly-touted Ultimate Fighter 17 finalist was no welcome back gift, but Howard did get the perk of going back to the UFC in his hometown of Boston last August. Three rounds later, Howard had an upset decision win over Hall and a new lease on his UFC career, one that wasn’t complete until he made a move back to 170 pounds for his UFC 168 bout against Bahadurzada last December.

“I talked to my coaches and my staff, and we decided that if I really wanted to be a UFC world champion, I need to do it at welterweight,” Howard said of the move. “I think I’ll be a more powerful beast at 170 and I think I can really do some damage in that class.”

“In the fight game, size does matter, especially with rules fighting,” added Allen. “It’s a sport and not a street fight, so him fighting at 185 pounds against Uriah Hall, you have to imagine that John was giving up 20 pounds on fight night, and he was also taking the fight on short notice. So this puts him at a huge advantage. You want your fighter to be as muscular as possible with as little body fat as possible. When we do that with John Howard, his weight falls around 185 pounds. He wouldn’t even be cutting weight.”

Being 5-foot-7 at 185 pounds doesn’t help either, making welterweight an ultimately better fit for “Doomsday.” And he proved it in decisioning Bahadurzada for his first win at 170 pounds since picking up Knockout of the Night honors against Daniel Roberts in March of 2010.

Now it’s off to Abu Dhabi and his matchup with LaFlare. Is it safe to say he’s enjoying the UFC ride more than he did the first time around?

“I enjoy it a little bit more,” he said. “I’m a lot more disciplined and healthy. Before, I was really enjoying the lifestyle of being a professional fighter and not the lifestyle of being a disciplined fighter. Now that I know that and know what it takes to be a world champion, I understand what it takes to go to that next level. I’m real fortunate to be making this second run, I’m a lot more mature, and that comes with age sometimes. When I was first in the UFC, I was a young kid and I didn’t understand the sport as I do now. Now I know what I need to do.”

Train. Fight. Win. And if the UFC happens to need a middleweight, he’s down for that too.