John Howard and The Art of Wars

“It’s not over til it’s over, and until that bell rings, you keep going. You claw and push and keep moving forward. I’m from Boston, and Boston athletes have the biggest hearts in the world." - John Howard 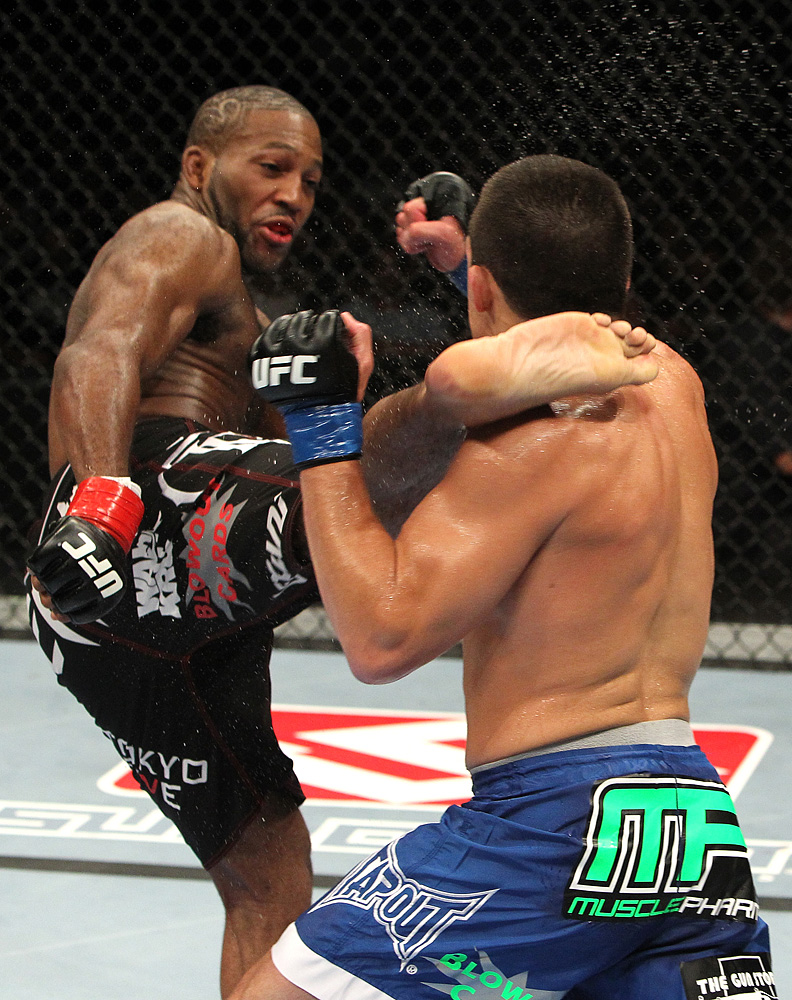 “Some people aren’t built for this,” said John Howard, and he’s right. And he’s not just referring to fighting, but his particular brand of fighting, one where personal safety, aesthetic grace, and points are thrown out the window. When “Doomsday” enters the Octagon, it’s a fight, and if he’s got to lose teeth, shed blood, or wake up in pain the next day to win, so be it.

“It’s not over til it’s over, and until that bell rings, you keep going,” said Howard, who faces Matt Brown this Sunday in Pittsburgh. “You claw and push and keep moving forward. I’m from Boston, and Boston athletes have the biggest hearts in the world, so if there’s five, ten seconds left and I’m losing, I never say die. Even if I’m winning the fight, I’m gonna go for the kill. This is the way I was meant to be and the way I was bred. I don’t care if I’ve got limbs broken, if my heart’s beating and I’m breathing, I can keep moving.”

That’s not talk either. Howard has lost teeth, shed blood, and broken bones in pursuit of his art, and as for the waking up in pain the next morning part, yeah, that’s covered too.

Of course, the key phrase is “it’s worth it,” and it’s why the 28-year old Howard keeps doing it. And the worth doesn’t come from wins and losses, even though he does more of the former than the latter; it comes from the satisfaction of knowing that when he’s done coming back from a sure defeat to knock out Dennis Hallman with five seconds left in the third round, going toe-to-toe with Thiago Alves for 15 minutes, or finishing Daniel Roberts for a KO of the Night, that the fans are going to be talking about him the next day.

“My whole career, it’s been wars,” he said. “It’s been full of up-down crazy scenarios where I’ve lost teeth, had my arm broken, got stitches. But I look forward to wars because they’re really fun. People remember them, and I know that I’ve been in a fight. I hate to play the jiu-jitsu game and get laid on. If I go out there and I lose, at least I lose in a war. That’s what you want to do. That’s my fighting style and I’m gonna go out there and bang.”

That’s music to the ears of fight fans and Howard’s opponent, fellow banger Brown. We’ve heard the proclamations before that certain fights were destined to be standup scraps to remember, but dare we dream that this is the one that will live up to expectations? Howard expects to do his part.

“Matt Brown is well-rounded,” said Howard. “I think he’s a better striker than he is a grappler, but I’m training to go wherever the fight takes me.  If it goes to the ground, I’ll fight him on the ground, if he wants to stand, I’ll fight him there, but the plan is to stand and bang with him because that’s what I like to do. I think it’s gonna be a rough night anyway. Even if it hits the ground it’s gonna be a rough night because he’s coming hard and it’s hard to keep him on the ground. And I’m not particularly a wrestler. I have a well-rounded game, but I depend more on my striking than grappling. It’s gonna be a striking night, and I expect it to be a rough night.”

When he says it, you can hear the excitement in his voice, but after dropping his last two bouts to Alves and Jake Ellenberger, he knows that he needs a top-notch performance to get back in the win column. So to supplement his work in Boston, he spent some time in Colorado working with fellow UFC standouts Shane Carwin and Nate Marquardt.

“I went to Grudge for the altitude training, and the guys out there have more experience and different looks and they helped me to improve my game,” said Howard. “So I took the opportunity and it’s been paying off. I’m in way better shape than I’ve been in a long time, I think my technique got  a lot better between striking and grappling, and I think my game came up a lot more.”

And while it was difficult for him to add to his training camp for the first time, it was necessary for a fighter intent on making a mark in the welterweight division.

“It’s a little tough, but it’s worth it,” he said. “Where I’m at (Wai Kru) has got real good fighters and a few UFC fighters, but because I’m fighting nothing but the top tier level guys, I need to train with top tier level people like Shane Carwin, Nate Marquardt, and so on. I just switched my whole game plan up, and I need to train with high-level guys to get me to the next level.”

Thankfully, for John Howard, there are wars on the next level. And as an appetizer, he plans on delivering another memorable outing this weekend.

“Fight of the Night easy,” he said, when asked what fans should expect from his bout with Brown. “Flying knees, flying elbows, everything. Expect a good show. I know Matt Brown and I’m real excited to be fighting him, and not because I necessarily believe I can beat him easily, but because I know he’s gonna come to fight. When you see another striker across the ring, it’s like the biggest honor system in the world because you know he’s gonna stand and bang with you.”