"I’m going to stay real healthy and fit this year, and get as many fights as I can." - John Hathaway 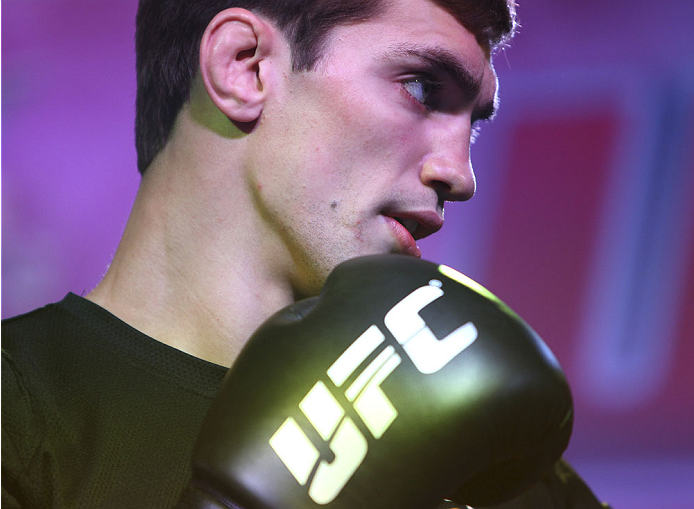 John Hathaway didn’t make a lot of noise about his battle with Crohn’s disease, one that kept him on the sidelines for over a year. In fact, when referring to his lost 2013 campaign, he simply describes it as “a bit of a bad one.”

That’s just Hathaway being Hathaway, and it’s why he’s one of the most likeable fighters in the sport today. He’s also back to punch his card as an active fighter this Saturday in the UFC Fight Night main event against Kim Dong Hyun, and not surprisingly, he can’t wait for the opening bell.

“It’s a fight that really makes you get out of bed in the morning and get really excited about getting out there and competing again,” he said. “I know it’s a main event against a real tough opponent and I’ve had a bit of time off, but I think it’s an exciting fight that can really push me to where I want to be and get higher up in the division.”

At 17-1, a record that includes seven UFC wins and a lone 2010 loss to Mike Pyle, Hathaway is on the verge of big things in a wide open division, if only he could stay active. Previous injuries and then the battle with Crohn’s have done more to damage his standing than anything that has happened in the Octagon, but with the illness under control, things should be different from here on out. And at the very least, the Brighton native can look to former UFC middleweight Drew McFedries, who rebounded from three years off battling Crohn’s to fight nine times in the Octagon, winning two Knockout of the Night awards along the way. Hathaway is confident that the worst is behind him.

“I’ll be a little more active this year,” he said. “I had a bit of a bad one last year and had to take off some time, but I’ll be hanging around a bit more this time.”

He is coming back at the perfect time, with the hiatus of longtime champion Georges St-Pierre giving the fighters at 170 pounds even more incentive to win big and make their case for a title shot.

“It’s exciting,” said Hathaway. “The welterweight division has really opened up now that Georges is gone, and there are a lot of great fighters around, so it’s going to be a real race with everyone trying to compete real hard and trying to get that title shot.”

In Kim, Hathaway will be facing someone just as eager to make a move into the championship race, and one who has made it clear that his days of playing it safe just to get the win are over. And that’s the version of “Stun Gun” that “The Hitman” expects to see in Macao.

More importantly, it will be a fight for Hathaway, something he hasn’t had the chance to say since his September 2012 win over John Maguire. And though some fighters might look at such a long layoff and wonder what they’ve lost in the time away, Hathaway’s press tour with Kim to announce the fight - which basically introduced him to Asian media – reminded the 26-year-old of just how far he’s come since turning pro in 2006.

“Coming from no mixed martial arts background and jumping right into it, I’ve come a long way since the beginning, and it’s a great sport because you’re always improving and there’s always so much more to learn,” he said. “I’m looking forward to the future and getting better and better at this, and getting right into that title spot.”

The future. When it comes to fighting, it’s nice to say that John Hathaway still has one. And he’s more than ready to begin making up for lost time.

“I want to be as active as I can,” he said. “I’m going to keep my weight nice and low so I’m always ready, and maybe I can take a couple fights on slightly late notice as well. I’m going to stay real healthy and fit this year, and get as many fights as I can.”