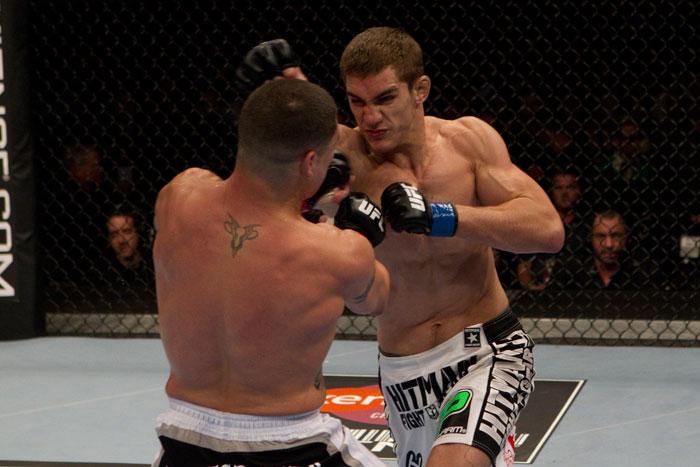 When John Hathaway made his UFC debut in January of 2009, he was 21 years old and part of a small group of under-25 prospects that included the then-youngest fighter in the organization, his 20-year old opponent Tom Egan.

More than three years later, Hathaway - who won that night in Dublin via first round TKO – is still on the prospect list at 170 pounds, but the group of young fighters seemingly sprouting up everywhere has made him a seasoned vet at 24. And for the record, now he’s merely 27th among the youngest competitors in the organization.

But with age comes experience, and Hathaway has certainly earned his keep in that department. 15-1 as a pro, “The Hitman” has won six of those bouts in the UFC, with his lone loss coming to Mike Pyle in October of 2010. More importantly, the Brighton, England native has learned how to deal with everything else that comes with being a professional fighter that doesn’t include punching someone in the face.

“There’s a learning curve and I kind of get better at it each time I believe,” said Hathaway, who received a healthy share of attention in the UK before his UFC 120 bout with Pyle. “I try to improve with it each time and get slightly better at dealing with the pressure and the media attention. Naturally, I feel like I’m a fairly shy guy when it comes to that. I’m not a massive fan of my picture being taken and this, that, and the other, but I’m definitely learning and improving at it and trying to hone my craft and get better at it.”

The personable Brit has passed those tests, but when he lost his unbeaten record to Pyle, some questioned whether this was the same fighter they watched roll over Diego Sanchez less than five months earlier. But Hathaway returned to the gym, sewed up some holes in his game and in March of 2011, he got back to his winning ways with a three round split decision win over The Ultimate Fighter alum Kris McCray. It wasn’t pretty, but it was a win.

“There was a lot of pressure on me to get back into the win column for that fight, and McCray did his best to kind of spoil my game a lot and just stay on top and not really do too much and not let me work too much,” recalled Hathaway. “I was trying to work like crazy and get as much off as I could on my back while I was still trying to get up and keep the fight active. I felt like I won because of the work rate, but I know judges like to score takedowns and he did get quite a few on me, which I’ve tried to correct.”

But if you’ve been keeping your eye on the MMA scene, you’ll notice that there has been a distinct lack of Hathaway news over the last 13-plus months, with the exception of the announcement that he was forced out of a UFC 138 bout against Matt Brown last November due to injury. Since then, he’s been getting healthy, working on his game, and doing it far from the spotlight, and as he approaches his return match against his original UFC 138 foe, the equally injury-plagued Pascal Krauss, Hathaway has a healthy dose of anticipation going on right about now.

“It’s been too long,” he said of the layoff. “It’s put me off track a little bit on where I want to be and where I want to be going and stuff like that, so I’m pushing and hoping for a good and successful year and getting a lot of competitions in and building myself back up and getting myself back in a spot that I need to be in. But I think it’s wonderful to get back to business and not be thrust into the spotlight so much and have a lot of media attention on you. I’ve had a lot of time to learn and pick up some things and hone my craft a little bit, which is always quite nice, and hopefully I’ve improved a fair bit. And I’m prepared to do a lot more.”

Saturday is a great place to restart for Hathaway, and even though the Krauss bout isn’t on the televised UFC on FOX 3 main card, this is one of the best matchups between two rising stars we’ve seen thus far this year, and the Brit knows that he’s in for a fight against the unbeaten German, someone he’s had plenty of time to study.

“I was looking at him quite a bit before the fight in England,” said Hathaway. “And obviously I changed to Matt Brown before I had to pull out myself, but we still had the tape on him so it was quite good to go back to that style and knowing slightly more about him than what I would if he was a fresh opponent. It’s nice to get that fight back on and it will be good for both of us I think. He’s an undefeated athlete and a great competitor, he doesn’t know how to lose yet, and he’s very well-rounded. He’s a strong guy as well and a good size for the weight, so I see hard competition in him. But I look forward to proving myself.”

And given Krauss’ unbeaten slate and the Fight of the Night performance he put on in his Octagon debut against Mark Scanlon in November of 2010, a win by Hathaway will make up for lost time pretty quickly in a stacked welterweight division where one big victory can skyrocket you up the ranks.

“You look at someone like (Johny) Hendricks who hasn’t had a lot of fights, but with his last fight against (Jon) Fitch, look where that’s put him,” said Hathaway, referring to Hendricks’ 12 second KO of the longtime contender. “In this division, there are so many good guys in there, and we’re all vying for the top spot, so if you beat the right guy, it does put you within one or two steps of getting a title shot. If he beats (Josh) Koscheck on the same card as me, he could be just one more fight away from a shot. It’s a packed division, but it’s all packed full of good people, so if you beat the right good person at the time, it will shoot you right up to where you need to be.”

That’s all John Hathaway wants at this point, to get back to where he was and continue on the path to a world title. He’s made it through the only loss of his career and a long layoff; now the hardest part is just waiting for the opening bell to ring.

“I’m at the stage now where we’re so close to it, I just can’t wait to actually do it and get out there and get in the midst of it,” he said. “It’s been too long for me. I’ve been missing the sport and it’s gonna be great to compete against someone so tough.”