"I have a goal set in my mind, and I want to make sure that I can hold all three titles at once." - John Dodson 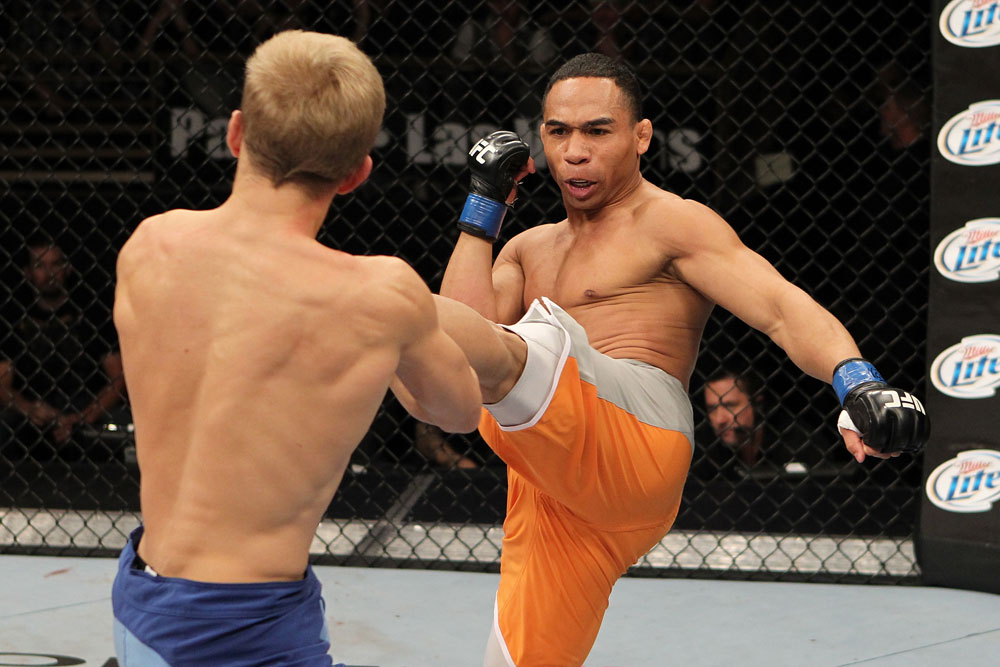 Every fighter who steps in to the Octagon envisions the day when he has his hand raised in victory as UFC President Dana White wraps a championship belt around his waist.

In that regard, John Dodson is no different from anyone else. He too hopes to be standing in the center of the cage, fans cheering as Bruce Buffer announces his name as a UFC champion.

And then he wants to do it all over again in a different division — twice.

The man with the Colgate smile and infectious exuberance has set his sights on being the first man to ever hold UFC gold in three different weight classes —flyweight, bantamweight, and featherweight.

What’s more is that the 27-year-old veteran wants to collection those championship belts in order, which is why after becoming member of the fraternity of Ultimate Fighter winners last season as a bantamweight, Dodson returns for his post-TUF debut in the newly formed flyweight division.

“I have a goal set in my mind, and I want to make sure that I can hold all three titles at once,” explains Dodson, who squares off with newcomer Tim Elliott on the preliminary portion of the UFC on FOX 3 fight card on May 5th. “I need to get 125 first because I want to have them all in order: 125, 135, and 145.”

Dodson knows he’s going to face an abundance of questions about setting his sights on capturing three titles before winning he’s had a chance to build off his December knockout victory over highly touted T.J. Dillashaw.

Still to this day, a story can’t be written about veteran Brandon Vera without mentioning the San Diego native’s bold prediction that he was going to be the first man to hold the heavyweight and light heavyweight titles simultaneously, a feat “The Truth” never came close to accomplishing.

While some may press Dodson to set the bar a little lower for himself, that’s not how the 13-5 Team Jackson-Winkeljohn fighter is programmed.

As Dodson sees it, the UFC allowed lightweight champion BJ Penn to step up and challenge Georges St-Pierre for the welterweight title without having to vacate his title. If the organization was willing to entertain the idea of “The Prodigy” reigning as champion of two divisions separated by 15 pounds, Dodson feels his desire to compete in three weight classes spaced 20 pounds apart shouldn’t be an issue. He also sees it as a way to ensure he gets to fight as often as possible.

“I want to make sure that I can hold all of them and defend all of them at the same time. If I can take one, I want to be able to carry them all on my shoulder, and I want to be able to defend them whenever the time comes. Plus, what that means is that I’ll get more fights throughout the year. If I defend (one of the three titles) once every two months, that means I’m guaranteed to fight six times a year.”

This weekend’s event serves as the departure point for Dodson as he embarks on his ambitious journey. While he admits that being left out of the inaugural foursome selected to fight for the freshly minted UFC flyweight championship stung a little, he understand why that group of combatants were chosen. Instead of dwelling on his disappointment, Dodson uses his exclusion from the four-man tournament as motivation, and plans to leave no doubt that he deserving of the opportunities that will eventually come his way.

“The four that were picked were there for a reason. They have two of the best guys from the UFC that can make the weight, and they also brought in the two guys that were the best in the division.

“I was a little hurt and offended that I wasn’t a part of it because I was the one running my mouth off as best as I could on The Ultimate Fighter about bringing in flyweights, but my brother said it best for me; he said, `John, don’t worry about it. All they’re doing is letting somebody else hold the belt and warm it up for you so that you really want it.’

“I want to prove my worth,” continues Dodson. “I don’t want people to sit there and say, `John got this handed to him.’ I want to prove it. They can throw anybody they want in my way, and I’ll just go ahead and do the best that I can to eliminate everybody in the process. If that means I’ve got to fight the guys that were in the tournament, up-and-comers, whoever’s still standing, (so be it).”

First up is Elliott, a late replacement for Darren Uyenoyama with no previous UFC experience. While facing a newcomer tends to heighten expectations for a more well-known fighter like Dodson, the man with the trademark creepy cackle knows he’s in for a serious challenge, whether the fans think so or not.

“He fought Jens Pulver, and then he fought Josh Rave,” Dodson says, reciting his opponent’s two most recent victories. “He’s on an eight-fight win streak, and it doesn’t really matter to me (that he’s a newcomer that people don’t really know). He’s coming out hard, and he’s willing to fight. Most people don’t really know too much about 125’ers as it is, and this is a good chance for them to find out that we are talented; not just in the UFC, but other organizations as well.”

Just because the division as a whole isn’t as recognizable as its heavier counterparts doesn’t mean Dodson has been suffering through a shortage of training partners in preparation for this fight.

While this may be just the fourth flyweight fight in UFC history, Dodson competed in the 125-pound weight division for the majority of his career prior to joining the cast of The Ultimate Fighter as a bantamweight, and he’s been training with ‘25s throughout his career, as well as a having at least one slightly heavier colleague putting him through the paces this time around.

“We have guys that are 125 at my camp; we’ve all grown up together, and we’re making sure that we’re fighting at 125,” explains Dodson. “That’s the weight class we’ve all aspired to compete in. As soon as the UFC — and there were other promotions like Tachi Palace Fights before that — started allowing us to shine a lot more, and stop fighting at a higher weight, we started doing it.

“I have guys at my weight class that are helping me prepare for this. I don’t have to worry about the speed or the technique being a problem against me; I have all that with me already. I also have the heavier weights as well — the ‘35s and ‘45s — plus Donald Cerrone’s been kicking my butt, letting me know how much I suck right now.”

Where some people might complain about a change in opponent in the late stages of camp, the perpetually upbeat Dodson took the news in stride. Though the hardcore set may have been more interested in the original clash of styles with the grappling ace Uyenoyama, Dodson thinks the pairing with Elliott will produce a better fight for the fans on Saturday night.

“I can’t really do anything with them changing (my opponent),” he says with the calm of a man who truly isn’t concerned by the late switch. “It doesn’t really matter who I fight; I’m just glad I’m still fighting on this card. If I had gotten pulled off the card I would have been a little heartbroken.

“I know he’s taking the fight on short notice, and that’s cool — I’m glad that he is; big ups to him. I’ve got to just come out prepared for everything. I’ve got to have my striking up to par, my ground game, my wrestling. Everywhere that the fight might go, I need to be ready at all times. I’ve just got to be on my game.

“It is a better style matchup for me, but also it’s going to be a better fight for the fans to watch. It’s going to be a high intensity fight. I know that he likes to push the pace for that first round, and I’m willing to push back. I can push him as hard as he wants to go, and I’ll eventually break him.”

When he does, Dodson will get right back into the gym to continue his pursuit of the first of the three titles he aims to capture and defend in his UFC career.

“People can sit there and make fun of me all they want, but that’s the goal I have in mind. You’ve gotta have a goal to chase, right?”