"I know everyone loves to have someone to hate, and if I can be that person, then I’ll be more than willing to accept it." - John Dodson 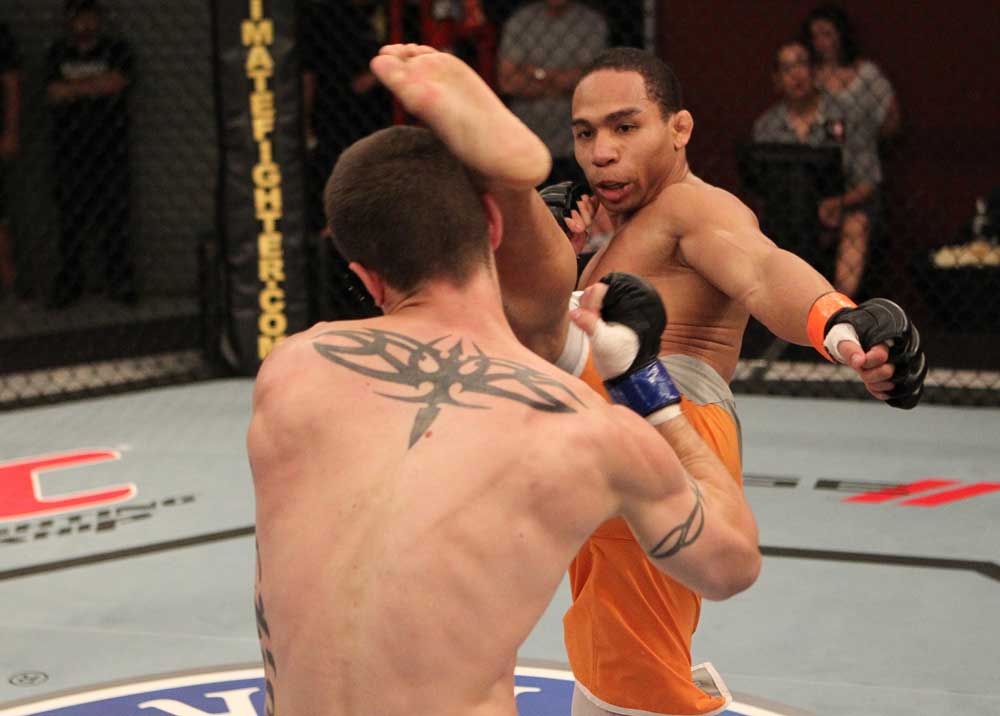 In comic books, the origin story is always the most beloved, the one everyone always refers back to. That’s likely to be the case for The Ultimate Fighter bantamweight finalist John Dodson as well, because he’s probably the only mixed martial artist discovered at Chuck E. Cheese.

It was at the famous kids’ restaurant where Dodson, just out of high school, was working to pay the bills while studying at the University of New Mexico. A state champion wrestler, he opted against taking a scholarship out of state to stay home, an idea that surprised the father of one of the children having a party at the restaurant, Chris Luttrell. Luttrell, Greg Jackson’s first black belt, knew of Dodson’s prowess on the mat, and he invited him to the gym. Dodson accepted.

“I got tore up, to tell you the truth,” he laughs. “I got beat up by everybody there and I was so pissed.”

He did impress his new gym mates with his tenacity though, along with a front flip that he used to avoid a double leg takedown.

“Why don’t you just stay here?”

Dodson did. He kept the Chuck E. Cheese gig for a few more years, but his real focus was elsewhere, as he began his mixed martial arts career in 2004 with a first round submission win over Zac White.

The ensuing years have delivered a mix of fortunes for the Albuquerque native, as he developed a frustrating pattern of win two, lose one while almost always being the smaller fighter thanks to a 5-foot-3 frame that optimally packs 125 pounds on weigh-in day. But finding consistent opposition at flyweight can be an issue, so Dodson has had to fight at 135 when necessary, something he doesn’t have a problem with.

It’s probably why he immediately approached his opponent in this Saturday’s bantamweight final, TJ Dillashaw, when they entered the TUF14 house, and made his desire to fight him evident. It wasn’t personal, just business.

“I gave him more praise and props the first day I met him than I did throughout the whole rest of the time I was in the house,” said Dodson. “I said ‘Hey man, you have one of the best skill sets, you train with one of the best camps; I want to fight you first because I need to test where I’m at in the house.’ If I don’t fight the best first, then I’ll never know where I stand. He totally agreed with me and I said ‘Don’t back down.’ He backed out, not once, but twice.”

In the meantime, Dodson fought his way to the finale with wins over John Albert and Johnny Bedford, earning his meeting with the highly-regarded Dillashaw. But it was Dodson’s antics in the house during taping that garnered even more attention than his fighting, as he was the “mole” that gave his team’s matchups and strategies to the opposing squad.

Such a course of action comes in stark contrast to not only Dodson’s gregarious personality, but his professionalism outside the Octagon. He’s fine with whatever perception people may initially have of him though, because the way he sees it, life on reality TV is what it is.

“People will come to love me because if they actually meet me and see what I can do when I progress through the UFC, they’ll be on my side,” he said. “I know what TV is and I know what it’s all about, so the best way to be the most talked about person on TV is to be a villain.”

So this was the plan all along?

“Pretty much. I know everyone loves to have someone to hate, and if I can be that person, then I’ll be more than willing to accept it.”

Well, playing the bad guy is one way to pass the time during the six weeks of taping, but Dodson admits that it was his alliance with some of his castmates – the Death Leprechauns – that made life outside the gym a little more palatable.

“We were all about having fun,” said Dodson. “We had Akira (Corassani), Louis (Gaudinot), Marcus Brimage, Josh (Ferguson), and we all just sat there and had nothing but stories to tell or just stupid stuff to do.”

As for the rest of the time there…

“It sucked,” he laughs. “I ain’t gonna lie. No TV, no cell phone, no internet. Not only that, we didn’t see any women. Six weeks without a woman, it’s kinda hard. The highlight for me being in the house was yelling at the ring girls.”

Those days are over now, and the sacrifices he’s made have paid off. All he has to do is beat Dillashaw on Saturday night, and a new chapter will begin in a wild story that began in the land of pizza, arcade games, and kiddie rides. And through it all, John Dodson will remember what his mother always told him.

“My mom taught me that you always have to be first with everything that you’ve gotta do,” he said. “Be first, be smooth, and be clean.”