John Dodson doesn’t mind being an underdog against another highly touted fighter who is ranked below him. He loves proving people wrong.
By Jon Gagnon • Aug. 12, 2020

For someone that has fought for a UFC belt twice and went all five rounds both times against one of the greatest fighters in MMA history, John Dodson doesn’t seem to be in the oddsmakers’ favor as of late.

Dodson has been in the game for a long time. He has 33 fights in his 16-year career, and he’s fought nearly everyone who’s anyone at 125 and 135 pounds, including former UFC champ Demetrious Johnson, who he lost to twice in a pair of title fights. He has a win over TJ Dillashaw and plenty other ranked fighters.

Despite his track record, Dodson finds himself as an underdog - for the fourth consecutive bout - when he takes on Merab Dvalishvili, at UFC 252 on Saturday.

“I’m always the underdog in every fight I’ve been a part of,” Dodson said. “Even at 125. Everyone they put in front of me. Merab is nothing different. I don’t feel any type of pressure where it’s like, ‘I need to win this one or else.’ I’m going to finish this dude because he has only one skill set.”

For anyone who’s watched Dvalishvili’s UFC career, you know his skillset is takedowns. And lots of them. Dvalishvili has 52 takedowns in six UFC fights. He’s won his last four bouts, and in February he broke the bantamweight record when he recorded 12 takedowns against Casey Kenney.

“Merab’s breaking records for all these takedowns but that means everybody has to keep getting up,” Dodson said. “And as we saw in my previous fight, it’s hard to keep me down. If he’s going to try and break new records by taking me down and keeping me down then it’s going to be a fun fight for me because I’m going to punch him in the face until he goes to sleep.”

This strategy worked out last time for Dodson, as he earned his first finish in nearly four years when he stopped Nathaniel Wood in February.

“I went back to being my old self with the old killers that got me there,” Dodson said. “I wasn’t using my old training partners like I wanted to back in the day and I just got back in the swing of things as of latel. So we’re full steam now and crushing it every step of the way.”

If Dodson is just getting into the swing of things now, it could mean another run at a title and his first at bantamweight. Last time out, Dodson wanted to get a win in front of his hometown fans and impress the UFC brass. Safe to say he delivered under pressure, and in June, it was reported he signed an extension with the UFC.

“I never lost the chip on my shoulder. I’m always one step ahead and ready to go in and beat up everybody,” Dodson said. “They can’t tell me that I’m not the best in the world when they haven’t faced me head-on. I’m the only person to drop the current champion at 135 and to make him look silly. And everyone he’s fought, he’s made them look silly.” 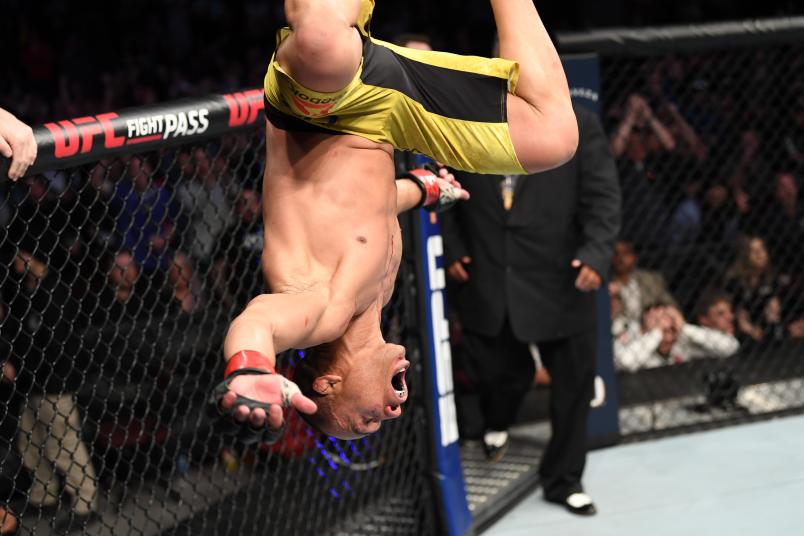 RIO RANCHO, NEW MEXICO - FEBRUARY 15: John Dodson celebrates with a back flip after his TKO victory over Nathaniel Wood of United Kingdom in their bantamweight bout during the UFC Fight Night event at Santa Ana Star Center on February 15, 2020 in Rio Rancho, New Mexico. (Photo by Josh Hedges/Zuffa LLC via Getty Images)

RIO RANCHO, NEW MEXICO - FEBRUARY 15: John Dodson celebrates with a back flip after his TKO victory over Nathaniel Wood of United Kingdom in their bantamweight bout during the UFC Fight Night event at Santa Ana Star Center on February 15, 2020 in Rio Ranc

Dodson, of course, is referring to current bantamweight champion Petr Yan. Yan is among the plethora of top-ranked contenders that find themselves on Dodson’s resume. But unlike Yan’s other UFC fights, Dodson was able to knock the champ down.

Dodson went on to lose the fight by decision, but it’s a fight he hopes to run back some day.

“I would love to get that rematch with a bunch of people at 135,” said Dodson, who’s also taken on top contender Marlon Moraes. “I want to secure my legacy and make sure I can go out on my shield and tell myself I’m an amazing fighter. There’s no better way to do it than by holding the title.”

Dodson knows in order to get that shot he needs to get past Dvalishvili, although a win over the Georgian and a rematch with Yan aren’t the only things on his mind.

“I think it’s too much of a step-up for him (Dvalishvili) to come and fight me. I feel bad for him that Aljamain Sterling sent his training partner to catch an ass-whooping that he deserves. It’s more disrespectful to me than anyone else.”

Dodson said he and Sterling talked of a matchup after Dodson’s win against Wood in February. Sterling instead took on – and defeated – Cory Sandhagen and he’s now considered the likely next opponent for Yan.

But Dodson has been in this game for a long time. He’ll take on whoever is put in front of him next.