"People want you to be realistic. If that was the case, then why are we fighting?" - John Dodson

First rule for interviewing John Dodson: don’t misquote him. Maybe ‘misquote’ is too strong a term. Let’s just say that when you’re talking about his previously stated ambitions in the fight game, get them right. In other words, don’t say he wants to be a two-division UFC champion.

“I said three divisions,” said Dodson with the speed of one of his hooks or crosses. “But for now, two seems more realistic.”

Easy for him to say, but not out of the realm of possibility either for the current flyweight contender, who gave 125-pound champion Demetrious Johnson his toughest test in the division to date before losing a close decision in January of 2013. Oh yeah, there’s also the business of Dodson’s 2011 knockout of someone you may have heard a bit about over the last few weeks – new bantamweight champion TJ Dillashaw.

“I’m the only one to knock out the current champion at bantamweight and it wasn’t even that long ago – it was three years ago,” said Dodson, who halted Dillashaw to win season 14 of The Ultimate Fighter. “Of course plenty of things can change – his speed has got a lot better and my technique and power have improved.”

But the point is, Dodson feels like he can take on the world, one weight class at a time. Ambitious? Oh yeah, but why do this if you’re not looking to be great? 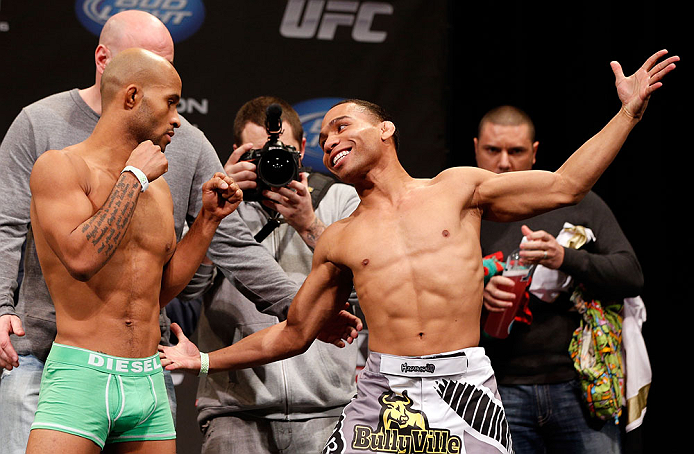 “People want you to be realistic,” he said. “If that was the case, then why are we fighting? (Laughs) If we’re fighting, that doesn’t mean we’re realistic people; that means we have super ideals about ourselves and what we want to accomplish. They’re supposed to be dreams that we are never meant to be able to reach, but when it happens, we reach legendary status. TJ Dillashaw did it (at UFC 173 against Renan Barao) and everyone doubted him.”

If Dodson can succeed, it may be the most epic feat ever seen in MMA. If you’re looking for a parallel in boxing, forget these days of champions being crowned every five pounds. Back in the days of eight weight classes, Henry Armstrong held three titles simultaneously and almost made it four if not for a draw in a middleweight title. Holding three titles across 20 pounds, that’s legend stuff.

“That means I would have etched my name into history,” he said. “To consecutively hold two titles would be monumental for the sport and for myself.”

He’s got to get the first one though, and that second title fight could get a little closer should he defeat John Moraga this Saturday in a UFC Fight Night bout that marks the second meeting between the flyweight contenders. Their first fight in 2010 was won by Dodson via decision, but what “The Magician” remembers most about the Nemesis Fighting bout in the Dominican Republic was how his paycheck, and the paychecks of the other fighters on the card, disappeared.

“It was a really, really long fight, like 22 minutes because the people who were supposed to be keeping track of the time weren’t doing their job,” he recalled. “Then we didn’t get paid. So it was a glorified sparring match that we had.”

“We wanted and needed that money bad for the holidays, but they just kind of gipped us,” said Dodson, who couldn’t get fights at the time, especially with a season of TUF for the lighter weight classes being rumored. 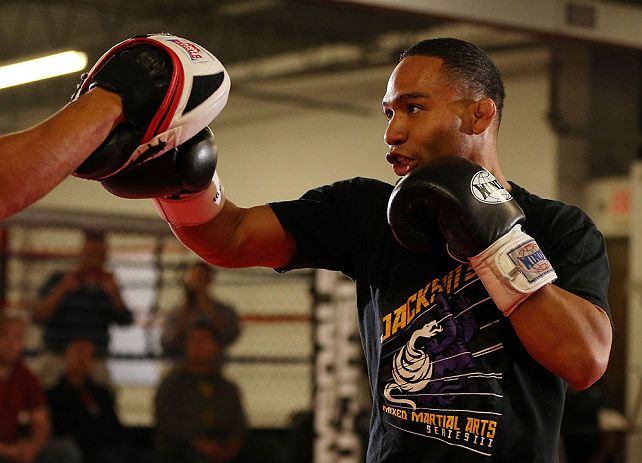 “No one wanted to fight,” he said. “There was word on the street that The Ultimate Fighter was going to come out for bantamweights and featherweights, so nobody wanted to risk a chance of losing.”

Dodson never had an issue with taking risks, so it was no shocker when he went up 10 pounds to compete on TUF 14. It was the right call as he walked away with the UFC contract right in time for the promotion to introduce the flyweight division. The rest is history for the 29-year-old, but this Saturday he goes back in time in his hometown of Albuquerque to fight a face from the past in the vastly improved Moraga.

“He has a lot more confidence in his hands,” said Dodson of his foe. “He’s not taking anyone down as much as he used to. In his other fights, he used to take people down all the time and ground and pound them out or submit them. Now he’s starting to change his game up.”

With those changes, Dodson expects a vastly different – and tougher – fight from Moraga, and he’s prepared accordingly. So don’t think that because he has visions of three title belts in his future that he’s forgotten what’s in his present. Not a chance. For Dodson, everybody’s King Kong, but with a catch.

“Everyone’s King Kong,” he said. “I’m hoping that I can be Godzilla to dethrone King Kong.”