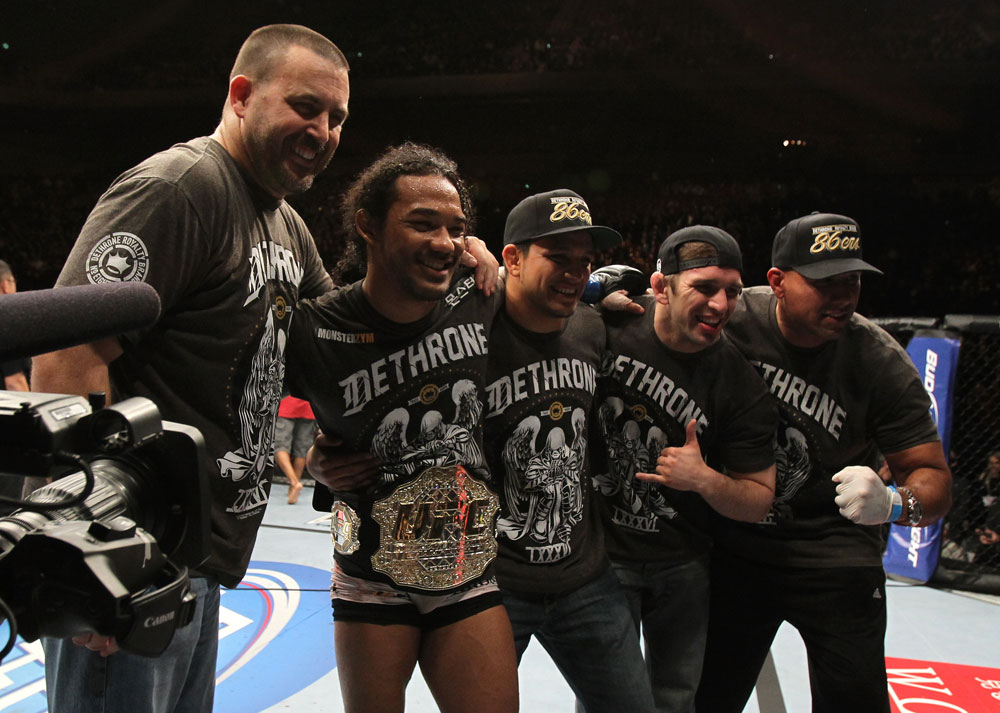 “I’m a band nerd, through and through,” John Crouch declares.

No one would have guessed that this story of a highly-regarded Brazilian Jiu-Jitsu black belt who currently oversees one of the premier MMA gyms in the United States, a place which boasts an ever-expanding roster of UFC talent, would begin with a proclamation of such curious magnitude.

Nor would one have guessed that a high school marching band instructor would also be running a BJJ school as one of the few jiu-jitsu instructors certified at the Gracie Jiu-Jitsu Academy, having learned the art from the first family themselves.

But that’s Crouch - a music major, a martial artist and, most of all, a teacher.

“It’s interesting for sure,” he admits. “From being a band nerd to teaching the toughest guys in the world, but I think it’s all a part of the same thing. I found something that I really liked to do and I invested my time and my heart in it and it has turned out really well. I guess it’s surprising, but it just seems part of my journey. It doesn’t really surprise me, but when you say it like that - it is different for sure.”

The head MMA coach and BJJ instructor at The MMA Lab in Glendale, Arizona - which trains elite fighters like former UFC and WEC lightweight champion “Smooth” Benson Henderson - started his hand-to-hand combat path later in life because of a thoughtful gift.

“For Christmas, my mom bought me and my girlfriend membership to a taekwondo gym - I loved it,” Crouch remembers. At the time, he was 27 years old and, finally, was getting the chance to try out a lifelong fascination. “I always liked contact sports, I always liked roughhousing. I played linebacker in football. I had told my mom a bunch of times that I wished I had taken martial arts and I never really did anything about it, so she thought it would be a cool thing for me to try.”

“I liked the reality in it,” Crouch explains. “I liked the answers to questions. Some of my other experiences, you would ask, ‘How do you stop this thing?’ The answer was like, ‘Well, you don’t let them do it.’ I remember one time I had trouble with a move in class and I was walking into jiu-jitsu class and I wasn’t too happy about it and Royce Gracie stopped me. He asked me what was happening and I told him I was having trouble with this. And he was like, ‘Yeah? Who is your partner?’ And I was like this guy, so he called the guy over and he had the guy do it to him. Royce did the defense, showed it to me, taught it to me, had me get under the guy and then showed me how to get out from the position. I was aghast. I thought it was the greatest thing I had seen in my life.”

Yes, Crouch is referring to THAT Royce Gracie, who Crouch holds his black belt under. In 1995, the UFC boom had happened and the Gracie Academy was in a Golden Age, with Royce as the preeminent force inside the Octagon after winning three of the first four UFC tournaments. Crouch learned from and was certified as an instructor by that original hierarchy of the Gracie family like Helio, Rorion and Royce. Especially in those days, the Gracie Academy was a revered and mythologized martial arts school and Crouch is one of the few who not only experienced it, but played a part in it.

“It’s irreplaceable,” Crouch states of his years at the Gracie Academy. “I feel a sense of pride that I’m with them. Being next to Royce Gracie. I love that I got all my belts from Royce. I got to train with Helio Gracie on an everyday regular basis. I got to learn from him. Rorion Gracie is the best teacher I’ve ever had. He’s the best teacher I’ve had the honor of being around and seeing. Lowell Anderson was one of the teachers and Richard Pressler was as well. I feel really honored and blessed to have been there. It was a great time for me to have been there. I feel lucky.”

Skipping ahead to today and The Lab, and one of the first attributes spoken by all of the fighters who train under Crouch is the family atmosphere. While MMA and jiu-jitsu are his trade, Crouch’s cornerstone is his wife and his three children. Besides an emphasis on wearing a gi, a family-friendly environment is an aspect The Lab and the Gracie Academy certainly share. It’s a point of emphasis Crouch inherently believes in for success in such a tough sport and it may have rubbed off on him due to his time with the Gracies.

“I’m a huge family guy,” Crouch affirms. “I love my wife and kids. They come to the gym all the time. They are a big part of what I do. My gym team is built off my family. I want it to be a family. I wanted it to be like that. I remember at the Gracie Academy, the kids running through there playing soccer and I remember a bunch of kids ripping around. I liked that families felt welcome. When I opened The Lab, I thought that a family environment was really important to me. I imagine that it was reinforced, but I don’t know if it came from the Gracies. It could have. But really, it was important to me because this sport is so hard on the individual and I really believe you need people around you and teammates to support you, people who really care about your development. You need teammates who will be there for you when you’re fighting and you’re there for them when they’re fighting. It’s been something I’ve stressed and it’s been a very strong thing at The Lab.”

Before the success of The Lab, Crouch did start a Gracie Academy sister school in Denver called Mile High Gracie Jiu-Jitsu. Those were the days when Crouch was splitting his time drilling armbars with some and drilling marching band music with others. It did not pan out how Crouch would have wanted, but it served as a learning experience for his future.

“My intent was to always teach jiu-jitsu,” Crouch reveals. “I went to the Gracie Academy and I was one of a few guys who were certified in their instructors program, which didn’t exist for that long. My intent was always to go back and start my own place and teach jiu-jitsu for a living. When I moved back to Denver, that was my home and I tried to open a school and I was terrible at it. It turned into a part-time thing. I was working to keep it open, but if you’re working on your job then you’re not working on something else. What I needed to do was dive-in with my whole body. I was afraid about the money, so I ended up closing the business. I taught jiu-jitsu out of other taekwondo schools or boxing gyms. I kept the club going for a few years that way.”

In 2006, Crouch got his second opportunity to teach jiu-jitsu full-time with an added challenge: training MMA as well. “My good friend Jason Beck, who trained with me at the Gracie Academy, wanted to open a mixed martial arts gym and he called me and asked me if I wanted to start a fight team,” Crouch said, admitting to Beck that he had never taught MMA, but was willing to try. “He flew me out here and it started good and then got better and here we are.”

Eight years later, Crouch’s facility in central Arizona is home to at least a half-dozen UFC fighters, including former UFC lightweight champion Benson Henderson. “Very quiet, glasses, he was a good wrestler, he was just a very very nice person,” Crouch said, recalling his first impression of the future UFC champion who kicked off his pro MMA career at the end of 2006. In June of 2014, Smooth scored a Performance of the Night bonus with his beautiful fourth round rear naked choke of Rustam Khabilov. Although seen as an elite lightweight, the win and, more so, the finish silenced Henderson’s critics by earning his first stoppage in four years.

“In every fight we’re looking for the finish - in every single one,” Crouch asserts. “The people we fought - Josh Thomson, Gilbert Melendez, Frankie Edgar - all the people we fight, they never get finished. It’s not an accident that they’re very good. While we’re working very hard and always looking to get a finish, it just doesn’t always happen. I was happy for it, but that isn’t the base of our success or failure. We’re trying to get wins, we’re trying to have good performances. While it was awesome and I loved and I’ll take the finish every time, at this level of competition we’re at, it’s not something that always happens.”

What does always happen is that win or lose, Crouch’s fighters show up well-prepared and ready to fight. Just look at last Saturday’s upset winner over Gunnar Nelson, Rick Story, for proof. It’s just another example of what Crouch brings to the table for his fighters, but as the coach prepares his team of fighters for their respective martial arts journeys, the simple question remains - how does a band nerd become a black belt? The answer is even more simple: just go.