"It's fun and exciting to go to Brazil, but by no means am I looking at
this as a vacation. I'm just going to go out there and try to be as
exciting as I can and look for the finish." - John Cholish 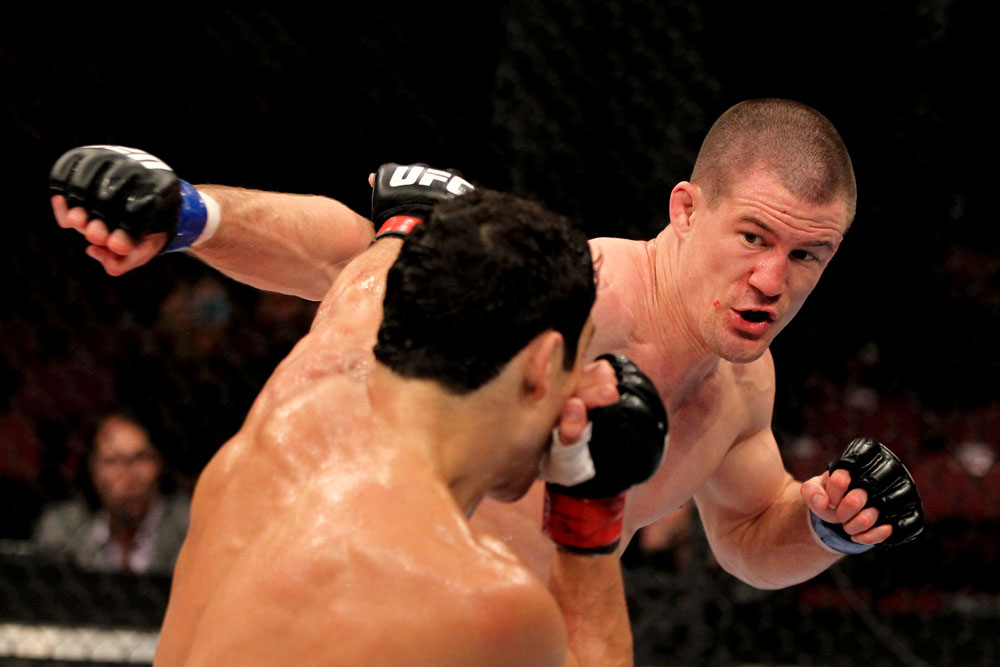 A hobby is defined as an activity or interest pursued for pleasure or relaxation and not as a main occupation. Obvious, ageless examples can include stamp collecting and woodcarving. Another possible, more contemporary, leisurely avocation is professional cagefighting. At least it is for UFC lightweight John Cholish.

“For me, it's still a hobby,” says Cholish. “I'm a commodities broker during the day and that's what pays the bills. I take fighting very seriously. I train as much as I can and I train smart. But if I lose that fight, it doesn't really change my day because I'm getting paid from my regular job and that’s what I live off. I, literally, fight because I love it. I've told my coaches if I woke up tomorrow and didn't want to train and wasn't having fun anymore then I would stop doing it. After my last fight, I thought to myself I could be down about this and bummed out. Or I could look at it like I had a tough fight, I was on the wrong end of it, I'll take a week or two off, learn from the mistakes, and come back stronger and more prepared for the next one.”

The 29-year-old New Jersey native spends his days suit-and-tie-ing it on Wall Street and his nights no-gi grappling at the Renzo Gracie Academy. Where Cholish squeezes in a social life between his stock market work and his shin kicking play is even more of a mystery as to how the Cornell University alum actually unwinds while defending triangle chokes. Additionally, not many people’s hobby find them front and center in the Octagon at the Izod Center in East Rutherford tangling with Team Alpha Male’s Danny “Last Call” Castillo for 15 minutes.

“I always go in expecting a win and if you don't have that mentality then you're in the wrong sport,” tells Cholish. “Danny kept a good pace. I expected him to press forward a lot more and that was wrong on my part. Instead of creating a game plan to be aggressive more, I like to counterstrike. He kind of stayed back and countered me a little better than I did him, which won him the decision. I definitely learned a lot from that fight. If you want to win a fight in the UFC, you've got to be able to push the pace the whole time and take the fight to your opponent. You can't wait for the fight to come to you.”

The unanimous decision loss was Cholish’s first in the UFC and his first loss since being on the wrong end of a guillotine choke on a baseball diamond in Fort Meyers, Florida roughly five years earlier in his pro MMA debut. In between those two performances, the former NCAA Division I wrestler and current BJJ purple belt racked up an eight fight win streak with seven stoppages. As a proven fight finisher, Cholish has a healthy blend of TKOs, like in his UFC debut against Mitch Clarke, and a variety of submission wins, like the kneebar that tapped The Ultimate Fighter alum Marc Stevens in Strikeforce. While the phrase “fighting smart” has been wrongly vilified to mean “defensive” and “boring,” Cholish’s version of fighting smart is attacking at the correct when and with the correct what to end the fight.

“My intention when I fight is to finish fights,” states Cholish. “I've been pretty successful at that. Sometimes it doesn't work - it's the UFC. You're fighting against top level guys who are trying to do the same thing to you. I never want to go into a fight thinking I just want to edge out a decision or steal a round here and there. I want to fight smart, I want to fight intelligently. I don't want to put myself in unnecessary harm's way. I mean we're fighting, so there is the possibility that I can get injured, but I don't want it to happen in a naive way. I'm not going to go in there and close my eyes and throw haymakers, but I am going in there to finish the fight because that's what I train to do.”

It has been a full year since Cholish has stepped inside the Octagon due to a torn groin suffered last November. The 8-2 lightweight was scheduled to take on the Thugjitsu master himself, Yves Edwards, in December at UFC on FOX, but a couple weeks prior Cholish heard an ominous pop from the inside of his leg while shooting for a takedown in training. The injury required surgery, two months of physical therapy, and a break from the daily gym grind required to be a UFC caliber fighter. In hindsight, the time off was a blessing in disguise, as Cholish let his body heal but also allowed his mind to grow by watching and thinking about fighting from the sidelines.

“At first, being injured was extremely frustrating because I was being told that I couldn't do something that I do every day,” explains Cholish. “For two months, I was told to stop. I couldn't go to the gym, I couldn't work out. It allowed me to watch video more. My coach John Danaher would send me ideas to work on or think about. When I eventually came back to training, it gave me a different perspective to look at it from. What's neat is our sport is so young and people are coming up with different techniques and moves in almost every fight like Anthony Pettis running up the cage or Jon Jones doing something new. I've been working on some new techniques and I feel like I've gotten a lot better and I'm looking forward to showing those things in the cage.”

Up next for Cholish is an international clash at UFC on FX 8 in Jaraguá do Sul, Brazil against the Gleison Tibau. A veteran with a pro career dating back to 1999, Tibau has been a fixture of the UFC’s lightweight division for the better part of a decade. The American Top Team product has fought 18 times inside the Octagon, with his most recent outing being a hard-hitting split decision loss to Evan Dunham in February. The absolutely enormous Tibau is a BJJ black belt and has shown a lot of improvement and comfort in his standup as of late.

“It's kind of funny because just a few years ago, I was watching these guys on TV and now I'm fighting the guys I was watching,” reveals Cholish. “[Tibau’s] been around the sport for a long time. I can't count on two hands how many fights he's had inside the UFC. I've watched more than a few. It's exciting to fight a seasoned veteran who is still extremely dangerous and has a ton of skill and talent. He's got heavy hands, he's got very good takedowns, likes to control on the ground, and he likes to attack for submissions. I'm not hesitant to do anything in a fight. In my last fight, I tried a flying kneebar and a kind of jumping heel kick to the head. If I see an opening, I have no problem trying something and seeing what happens. It should be an exciting fight. To me, it's a cool experience with a lot of possibilities that I'm looking forward to.”

In preparation for Tibau, Cholish is busy sharpening his skills at the aforementioned Renzo Gracie Academy in Manhattan. Of course, he’s under the supervision of the legendary Gracie as well as the enigmatic BJJ black belt John Danaher, who serves as Cholish’s head coach. Rounding out Cholish’s corner crew is Muay Thai coach Joe Sampieri and former IFL fighter Erik Owings. This training camp has been particularly memorable because of the cited injury, which made Cholish treasure his unusual hobby time with his highly accredited coaches and teammates.

“I took it for granted that I got to go to the gym everyday and train and see my friends and work out,” affirms Cholish. “Not having that for two months, it made me realize that I'm probably insane because most people after work probably go home, hang out with their friends, and have a beer. I can't do that; that would drive me nuts. I'm probably at least a little crazy that I need to be in the gym pretty much every day. It also made me value that time and the relationships I have that much more. I'm fortunate that I can go and train with these top level coaches, top level athletes and have access to that all the time. It wasn't that I wasn't valuing that before, but it made me realize even more how valuable of an asset that is and to take advantage of it as much as I can. MMA fans may look at it as an individual sport, but it's totally the opposite. Behind every great fighter there are tons of great sparring partners, technicians, coaches, and the list goes on and on. Without those guys, we wouldn't be able to do what we do inside the cage.”

Although the Tibau tussle is in his opponent’s backyard, so to speak, Cholish is hoping the crowd is more eager to see a good scrap than to cheer for their countryman. “Gleison is from Brazil, so they're probably going to cheer him, but if I can put on an exciting fight, I'm sure I'll get their hands clapping for me in the end,” adds Cholish, who is far from an enemy to Brazilians, being a faithful Gracie student for more than half a dozen years now. “I'm looking at it from the aspect that I’m able to fight in front of fans who are really going to appreciate the history of mixed martial arts and the background of Brazilian jiu-jitsu.”

On May 18th at UFC on FX 8 in Arena Jaraguá in Southern Brazil, the baddest commodities broker on the planet is set to battle the biggest 155 pounder you’ve ever seen as Cholish takes on Tibau. “I'm there to do work, I'm there to get my weight down, and have the fight,” asserts Cholish, who is cashing-in a week’s worth of saved sick days to exchange fists and feet inside an eight-sided cage, aka his hobby. “It's fun and exciting to go to Brazil, but by no means am I looking at this as a vacation. I'm just going to go out there and try to be as exciting as I can and look for the finish. For this trip, it's all business.”