John Castaneda Is Here To Stay

John Castaneda has been waiting his entire career for the call from the UFC. Now that he got it, he's not planning to go anywhere.
By Thomas Gerbasi, on Twitter: @TGerbasi • Jul. 23, 2020

A few days before he left for Fight Island and his July 25 fight against Nathaniel Wood, John Castaneda talked to him mom, and she had a familiar question for him.

“John, when are you going to be done fighting?”

Certainly not now, not after the 28-year-old from Minneapolis got the call he had been waiting all his career for.

It is, but it was quite the road to get here, one that he thought had reached its destination in August 2017, when he decisioned Cheyden Leialoha on season one of Dana White’s Contender Series. The victory was Castaneda’s ninth in a row, but when the night was over, it was Julian Marquez and Brandon Davis leaving with UFC contracts.

“I'm not gonna lie,” he said. “After that, I thought to myself, 'Man, what do I gotta do?' I was on a nine-fight winning streak at the time. So I lost a little bit of patience, absolutely.”

What followed was Castaneda’s version of going off into the wilderness, as some of the edge that got him to that point in his career dulled. He returned in November 2017 and fought three times in one night in a Combate Americas tournament, winning two fights and losing one. Five months later it was another defeat, and he’s only fought once since, submitting Marcelo Rojo in April 2019.

“These last three years I wouldn't say I've been stagnant, but you get a little down on yourself when you put in so much hard work and you go on a big win streak like that and you don't get a contract when the opportunity calls,” he said. “All I know is that this last year off I've had a chance to reconnect with my passion, which is obviously the sport of MMA, and I never stopped training. I constantly train and I train because I have fun, not because I'm getting ready for a fight or anything like that. I love the sport, so I constantly stay training, but now I have bigger things to train for, which is great.” 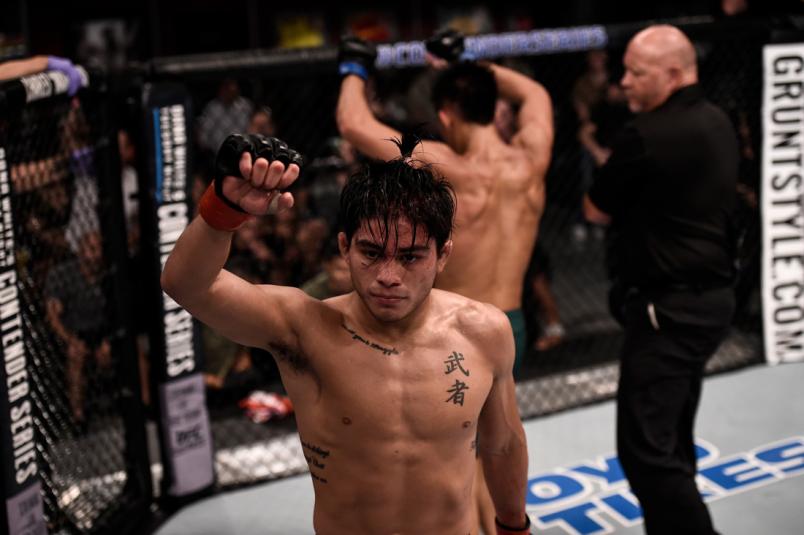 As for his two defeats to Levy Marroquin and Jose Alday, his first losses since 2014, Castaneda says, “The first one that I lost was at the end of a tournament. It was three fights in one night. At that point, it was a split decision loss, but to me, it was like a cardio issue. That very next fight against Jose Alday that I lost, same issue. Cardio. I never got hurt and it's not like I got submitted or outgrappled or outstruck. It came down to him being able to put more pressure on me than I was able to put on him due to cardio. So that's what I have been focusing on this last year, being in really good cardio shape and being able to push the pace when I need to, and not letting those really close fights slip away from me.”

And despite the more than a year on the sidelines, Castaneda knew that in this sport, staying ready is often the key to career-altering opportunities. He’s not a fan of short-notice fights because of the affect it has on his weight cut, but even though his replacement of Umar Nurmagomedov on this weekend’s card is technically short-notice, it’s really not.

“Basically eight to ten weeks ago I found out about the Fight Island cards and I looked them up and was thinking to myself, 'Man, I bet there's gonna be a lot of '35ers on all of these cards,’” he recalled. “So I made a mental note to pretend that I had a signed fight for these cards. Let's start a camp right now and hopefully in the meantime my manager, Jason House, will find me a fight last minute and I'll be ready this time. So that's what I did. I started a camp, I started a weight cut and a diet eight weeks ago in hopes of fighting on one of these cards.”

His hopes were answered when House called him to give him the good news: he was a UFC fighter and about to face one of the top talents in the bantamweight division in Wood. And with a win, he may just find himself where he would have been had he got that contract a couple years ago.

“He's been a prospect of this game and he's 3-1 in the UFC with his only loss coming to a very reputable guy,” said Castaneda of Wood. “It definitely does put me in the mix. This is a top prospect and I don't see why it wouldn't with a win over him.”

See, sometimes things work out. But we won’t know how they’ll play out until Castaneda makes his walk to the Octagon on Yas Island. And though this is his first time, he’s not rattled at all.

“That feeling has already set in,” he said. “The feeling of making my dream come true, fighting for the biggest organization in the world, I've already felt it and I think that not having a crowd, that's gonna be just like it was on the Contender Series. This is my 22nd professional fight. I had 16 amateur fights, so I've had my fair share of fights. This walk is nothing new to me.”